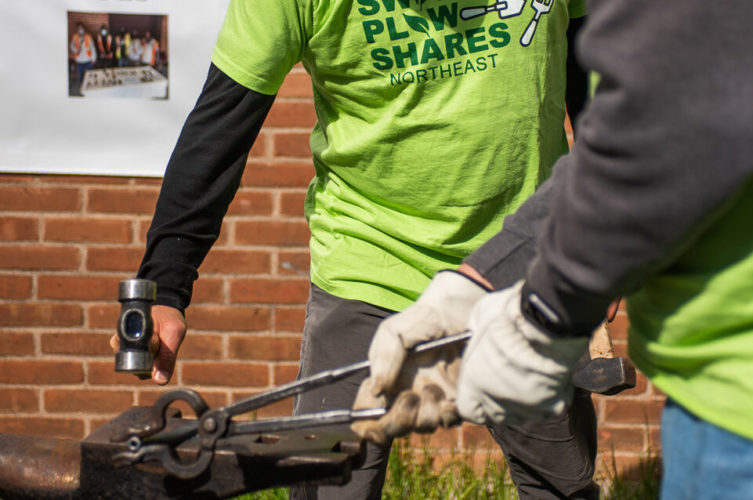 Photo by Jim Metzger courtesy of Swords to Ploughshares.

Great Barrington — The Right Reverend James E. Curry is well-versed in scripture, in particular Isaiah 2:4, “[…] and they shall beat their swords into plowshares, and their spears into pruning hooks; nation shall not lift up sword against nation, neither shall they learn war any more.” Curry, a now retired Bishop Suffragan of the Episcopal Church in Connecticut, has dedicated more than a decade to working with families of victims of gun violence. In December 2012, while serving in Newtown, the mass shooting at Sandy Hook Elementary School (one of the deadliest in the country, claiming the lives of 20 students and six adults) caused two of Curry’s paths to converge.

“It was a very, very tragic event,” said Curry of the events in Sandy Hook, part of his diocese, calling it “an opening […] about the issue that we have too many guns, and they’re too easily available,” a double wake-up call that ultimately led to the co-founding of Swords to Plowshares Northeast—a nonprofit rooted in the transformation of guns into garden tools. Curry and friends will visit The Guthrie Center on Saturday, November 12 from 11 a.m. to 1 p.m. for a demonstration and hands-on participation at forge and anvil.

“We can’t talk about Sandy Hook without talking about the kind of violence that’s in our cities; about the issues of suicide (two-thirds of all gun deaths are [self-inflicted]); and the amount of harm that’s done, not only to the people who are killed—and certainly to the people who are wounded—but also the ripple effect through family and community,” said Curry who, while working with the grief of families and the grief of an entire town, coupled with the struggle politically around common-sense gun legislation, got to brainstorming ways to channel feelings of powerlessness into action. It took a while to find them, but he eventually found RAWTools in Colorado—a nonprofit dedicated to forging peace and disarming hearts—an effort Curry calls, “truly inspirational.”

A joint effort remains in effect across the nation, dubbed Guns to Gardens, which begins with educating communities about voluntary gun givebacks and ultimately seeks artisans and blacksmiths trained to transform the destroyed weapons into garden tools. “One of the great things about our time in Great Barrington is we are going to give the tools [made] to three community gardens,” said Curry, pointing to Gideon’s Garden, Mumbet’s Freedom Farm and Greenagers.

Locally, members of Grace Church—under the leadership of Rev. Cristina Rathbone—are similarly well-versed with the biblical injunction to turn tools of war into tools of life. “We feel that gun violence is wreaking so much pain and death in our country [and] that many guns in many places would be put to better use as garden tools,” said Rathbone, underscoring her congregation’s understanding of hunting and, by extension, gratitude for hunters and the food they provide. “We are grateful, too, for this chance to take guns voluntarily handed in to the police and turn them into useful tools,” she added, noting that no guns will be accepted on the 12th; instead, blacksmiths will be using material from guns destroyed under the supervision of police in Connecticut.

Each year, 40,000 gun deaths occur in the United States. At its root, Swords to Plowshares is focused on reducing gun violence in the communities in which their events take place. By converting weapons of death into tools of life—and putting them to use for the betterment of the community—the goal of reducing senseless gun deaths is one step closer.

“We are looking forward to working with the Guthrie Center and other community partners (among them Railroad Street Youth Project, Christ Trinity Church, St. Paul’s Church, Taft Farms, and Multicultural BRIDGE) to welcome the Swords to Plowshares team to Great Barrington, particularly because it will be—primarily—a participatory event and everyone who wants to will be able to enact this transformation first hand,” said Rathbone.

Curry’s current role as chief blacksmith went hand-in-hand with the founding of the nonprofit—whose genesis happened in New Haven. Prior to the pandemic, the group worked with the local mens’ jail to teach incarcerated individuals blacksmithing skills; with time (plus his own training in Colorado Springs under the direction of RAWTools), Curry took over training and is now at the helm. While he and his team lost their connection to the jail in March 2020, they are working towards reestablishing it, citing restorative justice as another part of the puzzle.

“Men and women who are coming out of jail, into reentry programs, love this work,” said Curry who underscores it an integral “part of their re-understanding of their place in the community.”

Invariably, individuals who come into contact with Curry and his team are intrigued—not only by their work, but also by the potential of their efforts to create cohesion among humanity. Their events are raising awareness around gun violence prevention and, perhaps most importantly, sowing the seeds of conversation.

Amidst what he calls second amendment gridlock, Curry underscores it’s all about safeguarding families—especially those with young children, teenagers, and guns that are not properly locked and stored. “30,000 people a year take their lives. By guns. And a lot of the time that’s because [there is a gun] in the attic, or the basement, or in the garage—[and] it’s available in the moment of crisis,” says Curry. At the Guthrie Center, local police will be giving away free gun locks; still, Curry and team are encouraging everyone to consider for themselves: Are our guns really safely locked? Do we really need this gun? Or is it enough of a danger to us that we should voluntarily turn it in?

“There is nothing as empowering as taking the hammer to the gun part—metal that had been part of a weapon of great potential harm—and hammering it into a garden tool,” says Curry, whose sentiments Rathbone echoes:

“It’s a rare and extraordinary feeling, hammering what used to be a gun nozzle into a trowel, and it is our hope that people will leave feeling both more empowered and more hopeful.”

NOTE: The Right Reverend James E. Curry is a retired Bishop Suffragan of the Episcopal Church in Connecticut. He is a founding member of Bishops United Against Gun Violence and a contributor to the anthology, “Reclaiming the Gospel of Peace.” He is a Co-Founder of Swords to Plowshares and a Board member of Mothers United Against Violence in Hartford. Jim serves as Head of Operations and Chief Blacksmith creating the tools that are the final output of the group and organizing demonstrations with community and religious groups throughout the Northeast. He has a B.A. from Amherst College, an M.Ed in counseling from UMass, and an M.Div. and D.D. from Berkeley Divinity School at Yale.