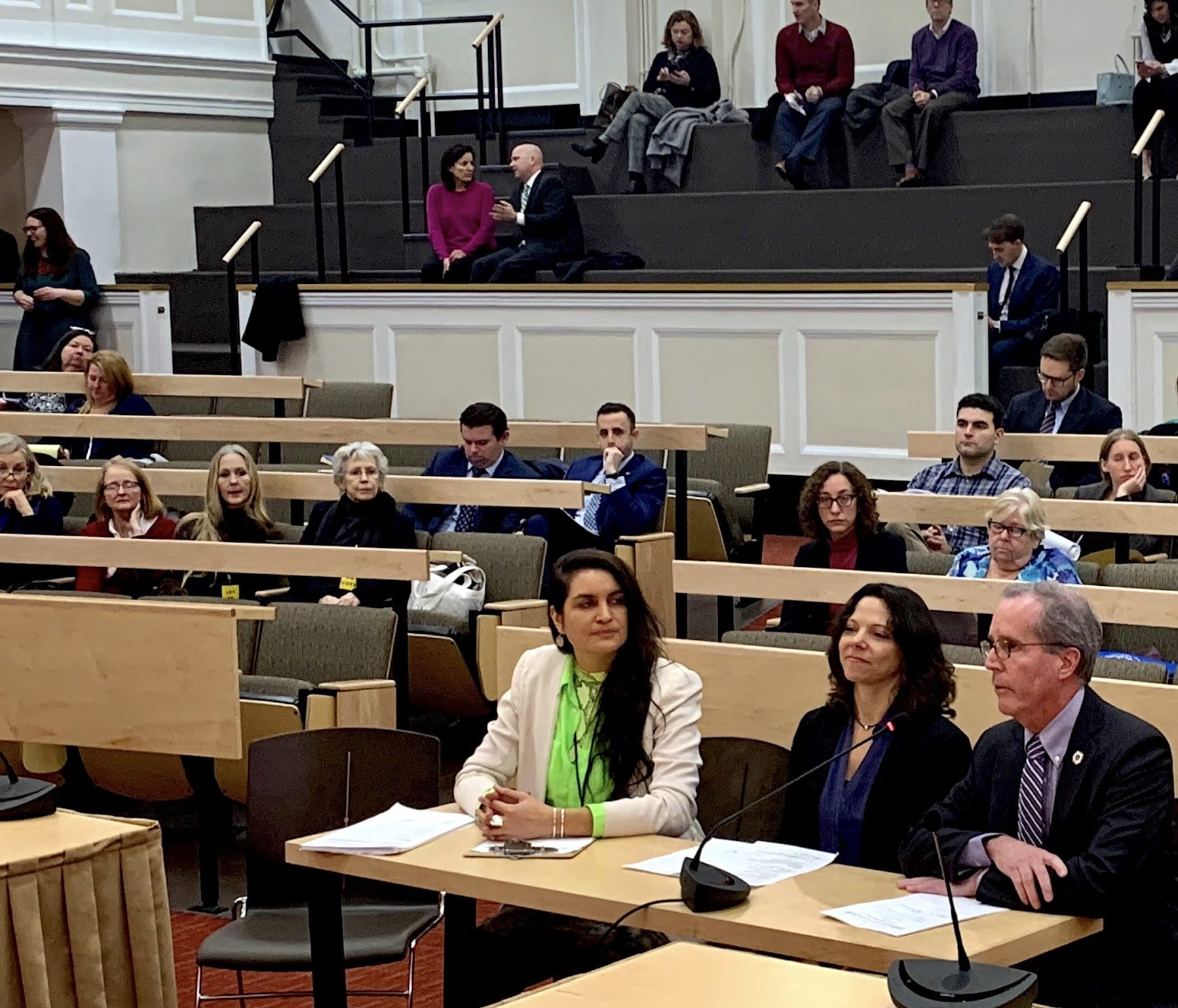 Boston — South County advocates for giving Great Barrington the final word on the return of horse racing were in Boston Monday to tell lawmakers at the State House about their proposal.

Selectboard member Leigh Davis has been leading the charge on the so-called home-rule petition that would require a ballot vote by town residents if any entity wants to run a horse racing operation, as was done for decades at the Great Barrington Fairgrounds.

“If people have concerns about animal rights or traffic, this allows them to have a voice,” Davis said in an interview.

Davis attended the hearing before the Joint Committee on Consumer Protection and Professional Licensure on Jan. 27 in the Gardner Auditorium. She read testimony into the record, including a letter from the selectboard supporting the petition. Click here to read it.

Also giving testimony in support of the petition were Janel Munoa, a member of Citizens Concerned About GB Horseracing, an activist group formed last year to share concerns about the possible return of horse racing to the Great Barrington Fairgrounds, and Sheffield resident Nancy Smith. Click here to read Smith’s statement.

Others from South County included Egremont resident Pamela Youngquist, and Sharon Gregory and Nan Wile, who are both residents of Great Barrington. Click here to read the statement from Gregory, who is a former chair of the Great Barrington Finance Committee.

At a special town meeting in the Monument Mountain Regional High School auditorium Dec. 11, almost 300 residents overwhelmingly passed a warrant item on a home-rule petition asking Great Barrington’s representatives in the state legislature to introduce legislation requiring approval of a horse racing license at both an annual town meeting and by a majority ballot vote.

The legislative co-sponsors of the petition were Great Barrington’s representatives on Beacon Hill: Rep. William “Smitty” Pignatelli, D-Lenox; and Sen. Adam Hinds, D-Pittsfield. Click here to read the letter they wrote in support of the petition.

“Decades ago, the Great Barrington Fairground was home to one of the most prominent agricultural fairs and horse races in the region,” Pignatelli and Hinds wrote.

At the time the fairgrounds’ horse racing license was last granted, it was subject to a countywide referendum, the two lawmakers wrote. The 57-acre site, now owned by Bart and Janet Elsbach, has sat largely dormant since the 1990s.

There is no proposal currently before the town but Sterling Suffolk Racecourse has reached a lease agreement with the fairgrounds’ owners to bring thoroughbred racing back to Great Barrington for up to 40 days in the months of September and October with the goal of starting in 2020, though that timeline is unlikely at this point. The company expects to spend between $15 million and $20 million on the project.

The need for a change in state law is one of the reasons for the proposed legislation, which has also been referred to the aforementioned Joint Committee on Consumer Protection and Professional Licensure and is still pending on Beacon Hill even without the sponsorship of Hinds, who withdrew his support last year.

Hinds was not able to attend Monday’s hearing on the home-rule petition, but Pignatelli told The Edge that lawmakers on the joint committee listened but did not ask questions. You can follow the progress of the petition, known as H.4272, by clicking here to see its legislative web page.

“It’s consistent with what we have done on casinos and marijuana — letting the towns weigh in on these topics,” Pignatelli explained.

Davis, who is in her first year as a member of the selectboard, took an interest in the subject when she heard that the legislation was proposed last year. She brought the matter to the attention of the board and wanted to know why more town officials weren’t made aware of the legislation affecting Sterling Suffolk Racecourse and why the town of Great Barrington was not represented at a public hearing on the bills on July 1 in Boston before the Joint Committee on Consumer Protection and Professional Licensure.

“If I hadn’t flagged it in July, who knows?” Davis said. “It could have just sailed through.”

Pignateli said the committee must make a decision (or “report out,” in legislative terms) on the petition by Wednesday, Feb. 5. The members can decide to vote favorably on the petition and send it on, refer it to another committee, or simply kill it.