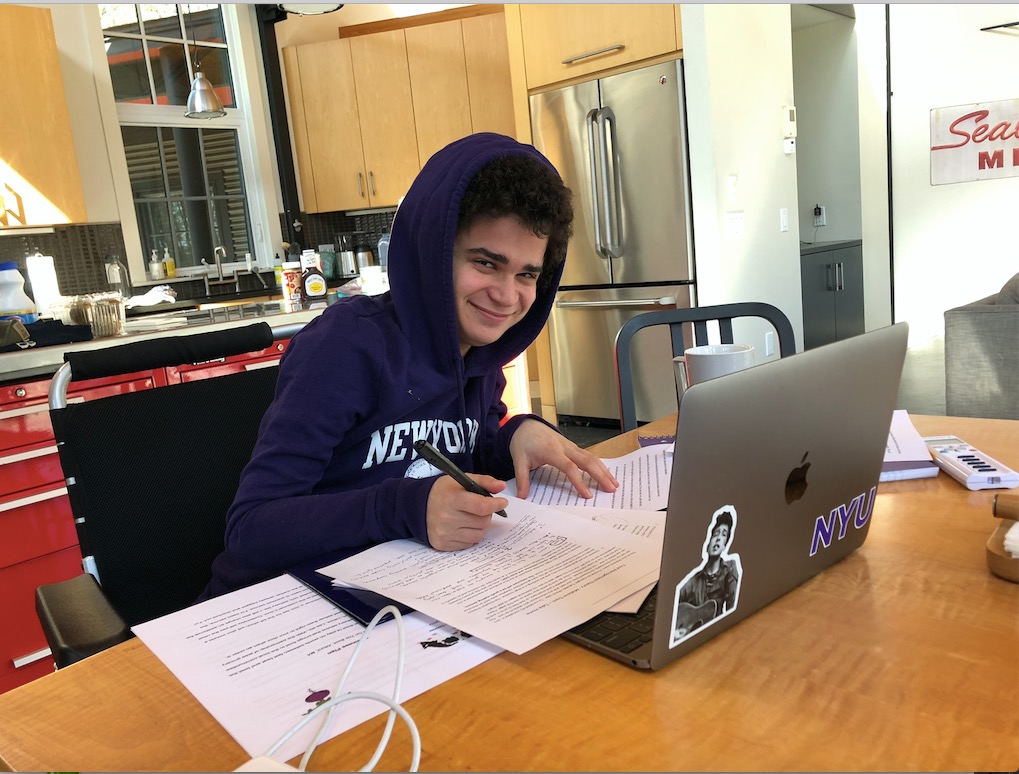 Egremont — The ease and accessibility of city living drew Charley Seckler to New York University when looking at colleges two years ago. In March, when the 19-year-old freshman’s spring break suddenly morphed into more time in the Berkshires than anticipated, he got creative, which, for anyone who knows Seckler, is not surprising. The second-semester food studies major ultimately made a connection with Tim Armstrong — founder of the DTX Company in New York — and secured a remote internship, the formal portion of which recently wrapped up. Working with other interns, Seckler immersed himself in the company’s mission of building a tech-enabled ecosystem that creates direct connections between consumers and brands through its first product, Flowcode — technology that is presently undulating through the Berkshires in the form of QR codes (of Seckler’s design) at restaurants and eateries from Lenox to South Egremont and spanning the 20 miles in between.

“In the city, I had so much independence,” Seckler told me in a recent phone interview. “Being at home is a pain, [and my] wheelchair is a process,” he added. Seckler has Duchenne muscular dystrophy, a genetic disorder characterized by progressive muscle degeneration. There has been a silver lining to navigating rural life with limited mobility: The process has not only forced Seckler’s ingenuity, it has also contributed to his burgeoning entrepreneurship. As the internship took shape, one Seckler initially saw as being separate from his studies at school, he quickly saw a point of convergence: QR codes (short for “quick response”) could facilitate the reopening of some of the local foodie’s favorite restaurants and coffee shops with contactless menus to help prevent the spread of COVID-19.

Seckler called the internship “a perfect time to learn,” explaining, “You have an opportunity to try things and, if you mess up, you are low enough down so as not to affect outcomes.” His intern boss, a junior at Georgetown, started the process off with PowerPoint instruction and group classes. Soon came a crash course in marketing, namely, how QR codes have been used in the past. The codes, which can be read quickly by a cell phone, are used to take a piece of information from a transitory media and bring it to your hands-free device; instead of requiring a chunky scanner, most modern phones can scan them using the camera option. Before long, Seckler was jumping in on phone calls, using Google calendar to organize his schedule, and reaching out to his own contacts in the 413.

“Being able to use personal connections in the Berkshires was huge,” Seckler told me. He reached out to all the restaurant owners, referenced his favorite dish at their respective establishments, and floated his idea: using Flowcode to customize a menu for touchless ordering onsite at local establishments. Seckler worked with the Lenox Chamber of Commerce to create a poster for eateries within walking distance of downtown, including Brava, Alta Restaurant and Wine Bar, the Scoop, Frankie’s, Prime, and the Olde Heritage Tavern. In Great Barrington, he worked with Dave Renner of the Marketplace and Miller’s Pub to do a series of six QR codes for the Barrington Courtyard including Fiesta Bar and Grill, Miller’s Pub, Steam Noodle Cafe, Tangier Cafe, and GB Eats. “Technically, it became a 9-to-5 job,” Seckler said of the time he invested in these two projects as well as stand-alone businesses, including John Andrews Farmhouse Restaurant, Marketplace Kitchen, Bizalion’s, and No. Six Depot, where, last summer, he landed an internship with co-owner Flavio Lichtenthal and learned the finer points of coffee roasting.

“Honestly, I’ve had a fear of seeing myself in the working world,” Seckler admitted (his first was at Rubi’s — yes, he loves coffee! — another job that involved creative thinking). After this spring’s internship, Seckler has a new outlook: “If I do anything in the food world, I want to combine it with business,” he said, noting, “Once you learn how the technology works, it kind of relates to any business model.” Like the idea he and a peer from Cornell brought to the DTX company “Shark Tank”: The pair teamed up to create QR codes to help disabled persons navigate the city starting with the subway system and expanding to include maps that would pin accessibility for restrooms, ramps and elevators. “The NYC subway system is terrible [for someone in a wheelchair],” Seckler explained, adding, “so many buildings are not accessible.” Seckler’s idea was one of three winners, and he is currently pursuing his idea. “If we propose a 60-day plan to the company, [and] they like it, we could be working part-time,” Seckler explained, adding that, for the moment, he has full access to Flowcode. The company’s advice? Start with the subway, and if you get interest, move onto buildings, which, to Seckler’s delight, would allow him and his partner to “completely shift our focus to building accessibility.”

At the moment, Seckler is working to create a poster so that — when the city comes back to life — individuals can scan the code instead of having to get on a computer. “We want to ease the process so those who are handicapped have ease in accessibility,” he said. He’s also provided a QR code for the Duchenne Center at UMass to aid in fundraising; and he’s in conversation with co-owners of the Pass in Sheffield to create codes for their products so someone new to cannabis can access information on how each product would affect them.

In the end, Seckler can look back at the spring of 2020 and smile: “I wasn’t expecting anything [in particular],” he said of the internship — although in retrospect, he learned “practical, applicable life skills.” As to the big-picture takeaway? “Emotionally, it ended up doing a lot of good for me,” good that Seckler plans to pay forward, this time in New York City, as he gets back to college life and the rhythms of city living. “I have always liked to learn new things, but I did not always feel so confident,” Seckler divulged, adding, “everyone has insecurities. The minute you learn that [even] the employees [at any given company] don’t know everything, you can jump in and go for it.”