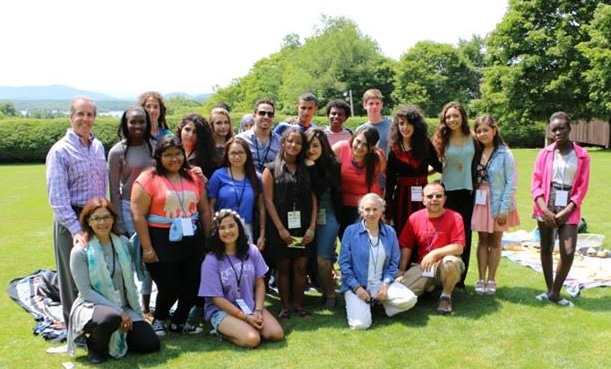 Sheffield — During last summer’s 72-hour ceasefire between Israel and Hamas, 18 Israeli and Palestinian teenagers managed to get visas and haul themselves all the way to Great Barrington. They came to write a song together, and to get to know each other — as fellow humans.

Here is a performance of that song:

The work of MiC took root in 2002, when Americans were still reeling from the September 11 attacks. Those who knew and loved Wall Street Journal reporter Daniel Pearl– a former North Adams Transcript and Berkshire Eagle reporter — awoke one morning to find him on the front-page of almost every newspaper in the country; he was a hostage in Pakistan. By then he was already dead, murdered by Islamic fundamentalists.

Musician and producer Todd Mack — one of Pearl’s friends — was moved to transmute the grief through the medium they both loved so well: music. A classically trained violinist, Pearl was also “a pretty mean bluegrass fiddler,” Mack said, and the two used to jam and perform together. After Pearl’s death, Mack held FODfest (Friends of Danny) concerts in his backyard every year; those expanded to larger venues and world tours. The concerts were not only to honor Pearl, Mack said, “but also about getting into the trenches and doing some work to try to counter the hatreds behind his murder.”

Mack saw an organization growing, one that might make inroads into deserts of conflict–one concert, jam session and youth program at a time. Founder of Sheffield-based off the beat-n-track recording studio, Mack started Music in Common (MiC) to reach people who live amid conflict, through the language everyone understands. Since 2010 the organization has focused its energy in the Middle East by working with Israeli and Palestinian high school students and youth groups of all denominations.

Mack said it was Pearls’ murder that planted the seed to work with Jews and Muslims in in the Middle East. Not everyone realizes, Mack said, that “It bears very direct relevance to why we even started as an organization.”

Mack has led five tours to the region since 2010, and this February he will lead the first tour with six American students in tow. “We are a staunchly non-political organization,” Mack said. The “peer-to-peer” diplomacy method gives “a very balanced view of the region. We have no agenda politically to get people to think a certain way.”

MiC facilitators Lynette Najimy and Justin Hillman are in Israel right now working with Muslim, Jewish and Christian students. Najimy is also making a documentary film about the work. Had it not been for MiC, said Program Coordinator Nancy Rogers, “these kids would never have necessarily met.” MiC, she added, pulls the students together to produce concerts “that engage and involve young people in musical collaborations…in Israel and the West Bank the work helps develop understanding and relationships between Israelis and Palestinians.” Through peer to peer diplomacy, Rogers said, the organization is “teaching people how music can be a vehicle for change.”

Mack also travels around the United States and works collaboratively with other organizations. “It’s in schools, community centers, interfaith youth groups, houses of worship of all denominations — teaching people of all faiths that through this kind of work we can bring young people, parents and families together,” Rogers said.

Since teenagers are a powerful contingent, their energy, vitality, and desire for healing and justice may be just the ticket at yet another moment in history when the world appears to be coming unhinged.

Following the success of the 2014 Summit at Simon’s Rock, a new tour is forming for a trip to Israel this February 13 to 22 during the school winter breaks. MiC will lead a delegation of six American high school students to collaborate with students from Jewish and Arab schools, write and record a song and create a multimedia project. The American students will also spend time touring Israel and the West Bank through Green Olive Tours. Applications are still being accepted.

“What we’re offering here is unique,” Mack said of the “full immersion” tour. “There is no other way to see Israel and the West Bank the way you’re going to see it on this trip. Other tours will not take you to Jewish and Arab high schools to work with those kids.” And, Mack explained, “there are certain things other [tour companies] don’t want you to see.”

Mack said he wants to expand into more tours, and programs for adults. MiC is also exploring work in Jordan and Egypt. “We will grow as we have the capacity to grow,” Mack said.

Another Youth Summit will convene again next summer at Simon’s Rock. In the meantime, teenagers who live amid war — and those who only read about it — will, in February, find peace, music and friends.

For an application and more information contact Program Director Nancy Maurice Rogers at nancy@musicincommon.org, or call 413-229-9939.