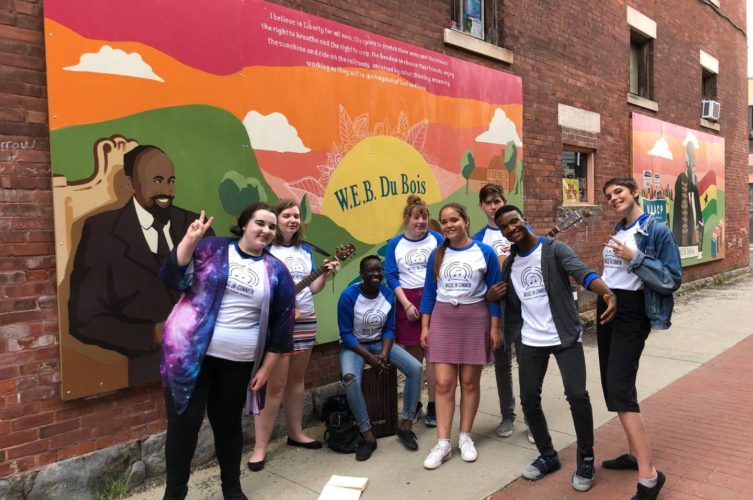 Participants in Music in Common's Amplify Berkshires songwriting and performing workshop in front of the W.E.B. Du Bois mural on Railroad Street in Great Barrington. Photo courtesy Music in Common

Sheffield — It was part workshop, part jam session in the music center at Berkshire School on Tuesday morning. “So who is singing harmony? Do you want to iron that out now?” was the line of questioning that punctuates the convergence of vocals, bass guitar, drums and keyboard. “If we’re thinking of going with the reggae vibe, should we queue up some Bob Marley?” another voice suggested. And within seconds the distinctive indigenous sound of the Caribbean steel drums filled the air, albeit via YouTube. After only a handful of attempts, the drummer, poised to simultaneously listen and replicate the sound she just heard, produced a rhythmic drum beat and the group erupted into song: “Shalom, salaam; shalom, salaam…” These symbolic salutations—in Hebrew and Arabic, respectively—point to the common ground from which we all spring despite our myriad differences. And each loosely translates to peace.

These are the sounds of Amplify Berkshires, a program of Music in Common, and the eight selected performers—ranging in age from 15 to 20 and hailing from California, Iowa, Connecticut and the Berkshires—met for the first time a scant nine days ago. As to the common tie that binds them? Music and the myriad challenges that come with being a young person in today’s society. Deep in the throes of rehearsing their finale—a song written in 2011 among a group of Hebrew Israelites and Bedouin students from different schools throughout the Middle East—there emerged a common thread: the similar ideas of peace and commonality in the midst of differences. As they sang, their message resonated clearly: “If you choose not to hate you hold the key … we’re all equal at the end of the day…to change the world, we have to change ourselves …”

“We are so excited about this year’s group of Amplify musicians,” said Marisa Massery, MIC program director and Amplify facilitator. “Each student is talented in their own way stylistically, but they all possess a deep concern to use music as a unifying and educating force for good.  We can’t wait to see what they create together.” A pair of weekend performances will serve as the culmination of Music in Common’s only audition-based program; participants are learning nine songs culled from more than 50 songs written by hundreds of youth from around the world in MIC programs, while writing a new piece of their own that will premiere on Friday night in Berkshire School’s Allen Theater. Samir Nomani, vice president of the Music In Common board of directors, is co-facilitating with Massery.

“They’ve been dished a lot of info this week,” said Todd Mack, the founder and executive director of Music in Common. He was talking both about music—10 songs in total, one of which they wrote themselves—as well as the rich and important history of MIC collaborations spanning the globe over the past 14 years. As the group switched gears to run through their original song, Mack interjected with observations rather than suggestions: “What do you guys think of the tempo as it is?” And a conversation ensued. “It’s a little slow,” one voice suggested. “It depends on what type of reggae you want,” another pointed out. “Can I stop you?” Mack inquired. “That’s a really awesome start [but] that verse needs to be double time. You are just learning,” he assured them before breaking it down from a cacophony of sounds to each individual voice. In doing so, the process of making music together actually mimicked the message of the song: it all starts with the individual.

“Shine Through,” written in just under 24 hours (including eight hours of sleep, one participant pointed out), reflects the disparate albeit universal life experience each of the eight members brings to the proverbial table. “This song is sort of a reflection of our own identities and struggles as youth to be understood and accepted by other generations. [It reflects a desire to be] validated, [and communicates] that we are human beings capable of sparking change and making a positive difference in the world through our art,” explained Trey. Watching the group rehearse, a few things became evident: They are learning to lead and to follow; to delegate and to take responsibility; to speak and to listen—in short, all the fundamentals for any collaboration that hinges on communication. Listening to them is profound:

“Wanna spark change, rearrange
Can’t box me in, I’ll break these chains
Today’s the day, so why not start
I feel it deep within my heart
The fire of youth, shining through
I’ll find my truth, I won’t follow you”

The music spoke for itself, audibly resounding as a powerful culmination of an equally powerful experience. Haley, a 17-year-old from West Cornwall, Connecticut, explained the early moments: “Our first day, we did lots of in-depth icebreaker conversations [about] who we are and what we struggle with in our own personal lives.” Art, a 20-year-old from Iowa, cut straight to the chase: “It’s about being open and honest with one another, respect[ing] our differences and still getting along,” they added. Maddy, a 17-year-old from Pittsfield, addressed the group’s age range. “This program proves that a 15-year-old and a 20-year-old can have a conversation [with] no talking down [to one another],” she said, proving that age is rather irrelevant. This inevitably led to a discussion of labels, a theme that permeates “Shine Through.”

Haley made an important distinction: “We don’t want to use [labels] in a discriminatory manner. But labels, when they come to [race, gender, ethnicity] are big parts of who we are and what makes us who we are.” Art elaborated on this idea: “It’s all about recognizing that there is a person behind the label—and not stereotyping—but labels are a significant part of who we are and how we maneuver through the world,” they added. Olivia, a 20-year-old from Richmond, recapped an exercise aimed at examining how we see ourselves versus how the world sees us. “To me, being a black woman in America is a very different thing from just being black. It’s kind of a double whammy,” she added. While Mack and Massery are continually striving to expose participants to different communities in the context of how we define community in the first place, powerful experiences emerged. The group was singing a cover of a song written locally at Monument Mountain Regional High School—“Ghost Light” by women, for women—“and in that song we have the guys step out,” someone explained. Another tune, “One Big Tree,” was comprised of a group that included “two refugees—one from Iraq and one from Afghanistan—me, I’m Jewish; a Muslim immigrant from Syria; and a native Californian who was Hispanic,” Wyatt, a 15-year-old from Los Angeles, explained.

In short, the lessons have been plentiful. “I think that this program is a very good way to bring people together and teach about history, present conflicts and how [both] can relate to what has happened in the past and what has happened to us personally,” said Darby, a 17-year-old from North Adams. “To work together and create bonds that, in a normal setting, might not have formed [was sped up by music]. We came together with a common goal.” At the end of the day, much of the work stemmed from coming together, breaking barriers and finding common ground: “Among all the different stories we share, there are commonalities,” said Trey. “The pain of being labeled and not being acknowledged as an individual to the pressure of not being taken seriously. [These challenges] created a shared empathy for one another, and that seeped into [“Shine Through”] as it came together,” he explained. What I loved most? Echoes of several styles permeated the song, from the initial reggae beats to the rap interjected near the end:

“This little light of mine
I wanna let it shine
But all the darkness in the world
Leaves me blind
I try to kindle my spark
But it is hard to see
With people telling me where, how, and who I should be
But at the point when it felt like too much to handle
I remembered those who didn’t curse the dark, but lit a candle
They held onto their light in the darkest of the night
In spite of their scars they rose to shine like the stars
So I am gonna carry the torch and light my fuse
I’m never blowing out my fire of youth!”

Music in Common is a nonprofit organization that empowers youth against hate through collaborative songwriting, multimedia and performance. The programs bring together teens and young adults from diverse backgrounds to discover and celebrate their common ground. Since 2005, Music in Common has directly served thousands of people in more than 300 communities across the globe and across religious, ethnic, cultural and racial sectors.