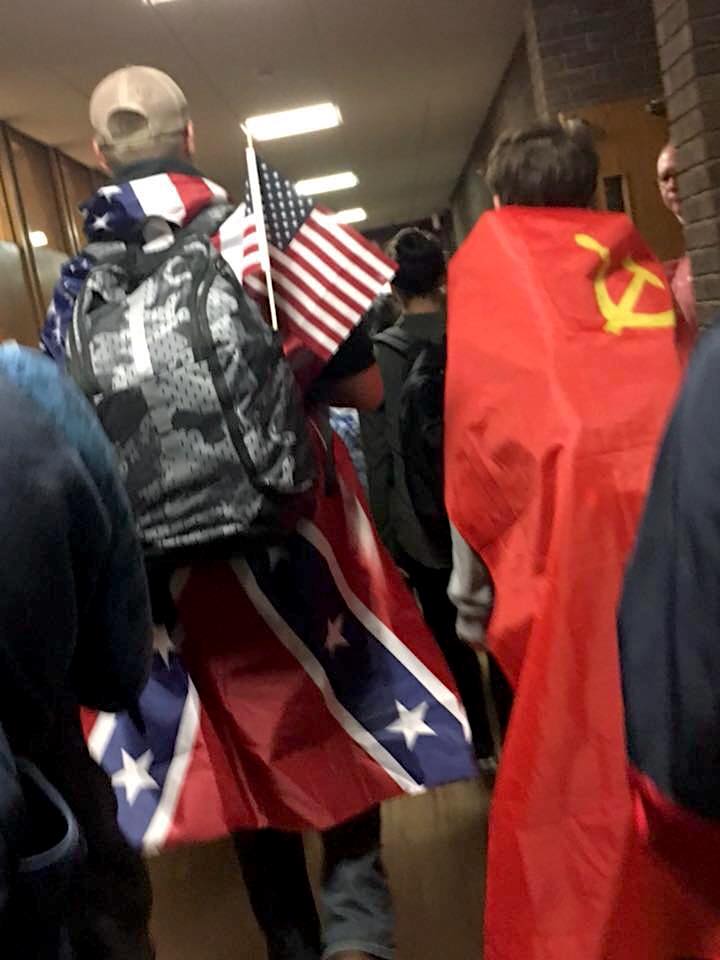 Great Barrington —The actions of a small group of students yesterday at Monument Mountain Regional High School have triggered not only a sense of outrage but a feeling that the school has some soul-searching to do.

As part of homecoming week (sometimes known as spirit week), the school has five “themed” days. Many students dress in costume to celebrate each day.

“Today’s theme was America Day, and, unfortunately, a student wore a Confederate flag to school,” Principal Douglas Wine told parents and members of the Monument community in an email on Tuesday. “We are taking the matter seriously.”

“By the time he spoke with the student, the flag was away in part because our student body had corrected the student for wearing it on campus,” Wine said. “Another student got access to it later in the day and wore it briefly before we confiscated it.”

Wine, who became Monument’s new principal in July, did not respond to a message seeking additional comment. Click here to read his entire email and click here to read an Edge story on his background and hiring. As part of the hiring process, Wine met with parents and other members of the Monument community this spring.

“I was told that we need to become a more inclusive and understanding community, and this incident confirms we have work to do,” Wine added. “I assure you we have already begun and will continue to educate our youth about the horrors of hate and prejudice.”

Berkshire Hills Regional School District Superintendent Peter Dillon said he agreed. He said he was “glad classmates, student leaders, called the behavior out” and that “staff intervened.” He declined to say if the student was disciplined.

“We have a lot of work to do as a school and community,” Dillon told The Edge.  “We are committed to creating a safe school environment.” He declined to comment further.

So what “work” exactly does the school have to do in order become safer and a “more inclusive and understanding community?” The Edge asked some parents of Berkshire Hills students of color. Some politely declined to comment. Others did not want to be quoted by name. And still others were happy to go on the record.

As most people know, the Confederate flag is a symbol of the 19th-century Civil War, which pitted the secessionist Confederacy of the south against the Union troops of the north.

That war was fought, in large measure, over the issue of slavery and whether it should be abolished nationwide. Display of that flag is viewed by many as a racist act since it symbolizes the now-defunct Confederacy. So displaying the Confederate flag is seen as insensitive at the least and racist at the most.

“Or it could be a lack of understanding about what it means,” said Erica Mielke, who has a son at Muddy Brook Elementary School. “Still, it was supposed to be America Day, but it seemed more like Racist Day.”

Indeed, one man who used to live in Ashley Falls, Ray Dumont, once posted an image of the confederate flag on a Facebook page he manages and displayed the flag in front of his house, but insisted he had no racist intent. Rather, he told the Edge in an interview for a story more than three years ago, the Confederate flag represents the “country” lifestyle or the “redneck way of life.”

In some ways, it was an odd juxtaposition at Monument. One photo obtained by The Edge showed a student walking through a doorway in the school. He was wearing an American flag as a cape and a longer Confederate flag underneath. The latter was visible down to the backs of his knees.

Another showed the back of the same student strolling down a hallway, but walking alongside another student who was wearing what appeared to be the flag of the old Soviet Union, complete with the hammer-and-sickle emblem, which is the proletarian symbol that was adopted during the Russian Revolution.

Mielke said she was encouraged that the “first people who asked to intervene were the students themselves.”

“I see this as one more incident showing that there is a real problem with racial discrimination and racially-charged events at Monument,” Mielke said in an interview. “As a parent of a mixed-race child, it makes me really concerned about what his experience there might be.”

Mielke’s son is half Mexican and she said she is “saddened to think of him walking down those halls some day.”

“I know some parents of color who have pulled their kids from Monument,” Mielke said.

The most recent major racial incident at Monument happened about two years ago when an African-American Monument football player “took a knee” to protest racial injustice by law enforcement rather than stand for the national anthem at the beginning of a game. Another Monument student, a white male, subsequently threatened the black player with a “lynching in the woods,” a hanging and a beating.

The incident sparked a probe by both the Great Barrington Police Department and the FBI, which sent agents to the school, presumably to investigate the possibility of federal civil rights violations or hate crimes.

Then-Principal Marianne Young later called an all-school assembly to talk about the issue as a community. Young blamed herself for not doing enough to address the situation and vowed to “recommit” herself to the issue of racial harmony.

One student of color said he did not feel safe in the halls. Others said they had witnessed African American students threatened with violence. Young announced her retirement a few months later.

According to statistics from the state Department of Elementary and Secondary Education, as of the 2017, Monument’s student body was 85.3 percent white, 6.5 percent Hispanic and 2.1 percent African American.

Ari Zorn, an Egremont resident who has two sons at Monument, said in an interview that his son told him about the Confederate flag incident last night.

“He was really angry about it,” Zorn said. “He said there are lots of issues of race at that school.”

Zorn himself is keenly sensitive to the issue. He was a black child who was adopted by a Jewish couple. As a result, he has a unique perspective on race. Still, Zorn said he does not want to criticize unconstructively. He said he is working behind the scenes to help address the issue. He also suggested there could be other factors in the era of a President Donald Trump.

“This is an issue that’s in our country,” Zorn said. “My goal is equality for everybody. I’d like to see a fair playing ground.”

Gwendolyn Hampton VanSant heads Multicultural BRIDGE, a Lee-based organization whose services include diversity training. Van Sant and her family live in Great Barrington. She has a son in sixth grade at Monument Valley Middle School.

After the “lynching” incident, she formed the Berkshires chapter of Not In Our County, a “campaign to unify communities throughout the county to stop hate, address bullying, and build safe, inclusive communities for all.”

NIOC, which is part of the national Not In Our Town movement, invites would-be members to make a pledge to “commit to working together with my neighbors to create safer, more integrated communities for all residents in Berkshire County.” VanSant said 147 Monument students have signed the pledge.

Multicultural Bridge has been working along with the Railroad Street Youth Project to help the school. Even before the lynching incident, Bridge had been providing diversity and leadership training at Monument, along with respect forums and classes on race. A Toward Racial Justice group has been established and meets monthly on Thursdays at the school.

“They already had a tool in their hands to deal with this,” VanSant said of the training and the heightened awareness of racial sensitivity. “So it was fresh in everyone’s minds.”

Nevertheless, VanSant said there is still much work to be done to change the prevailing culture to one of justice and inclusivity. And she knows that personally.

“Talking as a parent, my son has joined football,” VanSant said. “He’s been called the N-word, and his friends have also been called it … I think it’s a combination of what’s going on in the politics of our time and people not having all the tools to embrace intolerance.”

Nevertheless, VanSant added that, “Overall, I don’t think we’re a hateful community but there is bias. We need to be prepared to respond and have these tough conversations.”

Ananda Timpane, who heads the Railroad Street Youth Project, agreed with VanSant, both in terms of the conversations that need to continue to take place and the extent to which the students reacted properly to the flag incident on Tuesday.

“I want to take a moment to lift up the leadership of young folks in the school who intervened early, and apparently with success to get the first student wearing the flag to take it off,” Timpane said on a Facebook post. “There is a lot more work to do, but it’s important we all do what they did and take responsibility for stepping up and stepping in where there is harm and injustice.”

As for whether wearing the Confederate flag is constitutionally protected speech in a public school setting, the courts have been ambiguous. The courts have generally given schools latitude to ban wearing the flag if “school officials can reasonably forecast that the wearing of the Confederate flag will lead to a substantial disruption of the school environment,” according to the First Amendment Center.

Last year in Easthampton, a student who wore a sweatshirt bearing an image of the Confederate flag following a racially charged incident in the high school parking lot. School department officials later contacted the American Civil Liberties Union and the U.S. Department of Justice.

The Easthampton officials were referred to Pyle v. the South Hadley School Committee, a 1996 decision from the state Supreme Judicial Court that held that, “The right of students to freedom of expression in the public schools of the commonwealth shall not be abridged, provided that such right shall not cause any disruption or disorder within the school.”

So in order to withstand a challenge on First Amendment grounds, the school would have to demonstrate that the wearing or display of the Confederate flag would be disruptive. Absent disorder, the right to free expression would prevail.