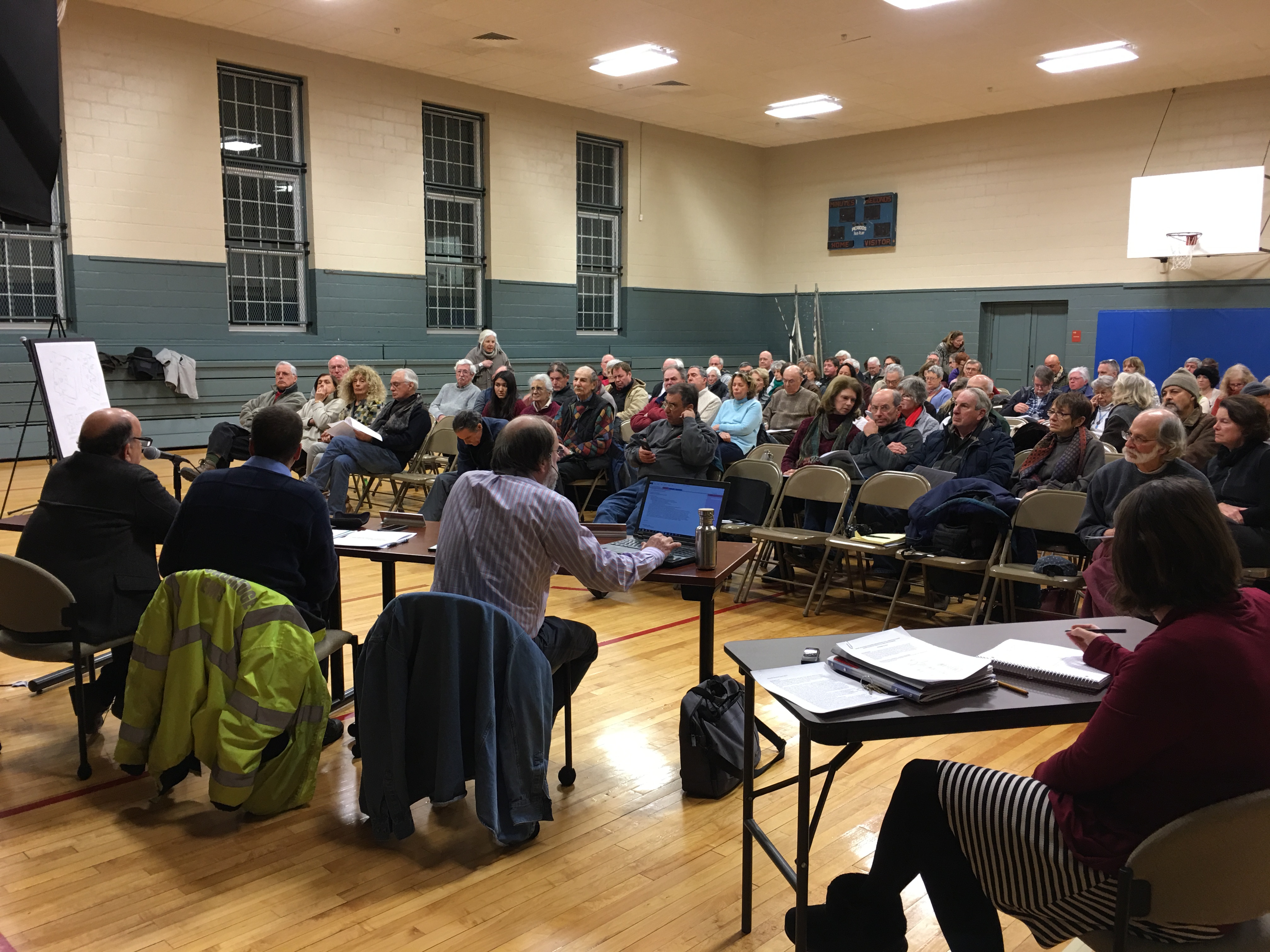 Stockbridge – After listening to three hours of comments from residents on a proposed shared services agreement with the neighboring towns of Lee and Lenox, the Board of Selectmen voted 2-1 Monday night (January 9) to withdraw “permanently and immediately” from the agreement that would have regionalized certain municipal functions and created the post of a chief administrative officer (CAO) to be shared by all three towns.

Offered by Selectman Donald Chabon and supported by Selectman Ernest J. Cardillo, the motion to withdraw read: “I move that we reject the Division of Local Services — Shared CAO Model, as modified by the Administrative Review Committee of Lee, Lenox and Stockbridge on November 29, 2015.

“And I further move that we permanently and immediately withdraw from the October 2015 tri-town agreement entitled, ‘Agreement by and between the Boards of Selectmen in the Towns of Lee, Lenox and Stockbridge’ and from the Administrative Review Committee which was created by that agreement.”

The framework for establishing shared services came from the Massachusetts Department of Revenue’s Division of Local Services, with the help of state Rep. William P. “Smitty” Pignatelli (D-Lenox). It proposed a hierarchy of administration that had a joint advisory board overseeing the work of the chief administrative officer and two assistants.

But the Stockbridge board’s decision effectively scuttles a 15-month effort between the three adjacent towns to establish new cooperative management and shared services, including the post of a shared town administrator. As a result, the adoption of a regional approach will not be considered at the annual town meeting in May, unless it is added to the agenda by citizens’ petition.

And the Stockbridge withdrawal leaves open the possibility that Lee and Lenox, now, could form their own 2-town shared services agreement, with a shared administrator, Pignatelli predicted.

“Personally, I’m disappointed,” he said, when reached by phone on Tuesday morning. “Small towns are struggling and need greater efficiencies. There are real savings to be had in town budgets in salaries and benefits. But I respect the decision by the Stockbridge board. Lee and Lenox are now free to try it for a few years.”

And in answer to the anxiety expressed by some Stockbridge residents over a perceived loss of identity, Pignatelli pointed out that it is the elected selectmen who are the face of the town, not the administrator.

“I don’t see how you can get swallowed up,” he said. “Nothing changes. The charter is the same, the selectmen still have the same authority. What I would ask of Stockbridge is tell me why it can’t work, not what you’re afraid of. But if Stockbridge wants to investigate forming shared service agreement with West Stockbridge, I say go for it.”

In Stockbridge, however, it was the creation of a shared administrator who would replace each of the town’s — that was the principal reason for the board’s rejection of the shared services proposal and skepticism about the concept from Stockbridge residents.

“I’d like to tell a story that goes back many years,” Stockbridge resident Denny Alsop told the board. “I once served on the School Board, but I learned a lesson. The three towns got together, after a lot of negotiation, to finance a new school building. One of the towns, the biggest town, Great Barrington, then located a landfill right across the street from the school. Not only that, the landfill was a dumping ground for transformers loaded with PCBs. We had to close the soccer field because of the fumes. That’s what happens when you cede authority to others with different interests. Let’s have the buck stop here.”

“How can one person, one chief administrative officer, give us the time,” stated Cardillo, explaining his opposition to regionalization. “How can one person handle three towns, three town meetings, two school districts, three sets of weekly meetings. There is too much conflict between the towns, and we would lose out, since the other towns are larger.”

And he reminded his fellow board members and attendees that because of discussions about the joint services and administrator, they had suspended the search for a town administrator.

“Already, we are behind in finding a town administrator to replace Jorja Marsden [who retired in June],” he said. “I can’t see fixing something that isn’t broke.”

“This is not a good fit,” added Selectman Chabon. “We have one-fifth the population of the other towns. We need a full-time administrator, with a 100 percent focus on Stockbridge, not up the hill in Lenox. We have our own big issues, with infrastructure, the master plan, and bridges. We can manage. It’s inconceivable that the shared administrator would look after Stockbridge. We have a conflict of interests, for what is good for Stockbridge may not be good for Lee or Lenox.”

Selectman Shatz, however, pointed out that “the concept of shared services is not new. Our school districts reflect the need to consolidate services. TriTown Health Services founded in 1927 is a prime example of communities combining forces to deliver important services.”

He observed that the three-town pact would be given a 3-year trial – a “break-in period” – during which any of the towns could withdraw if it wasn’t working. And he insisted that the agreement would not replace the town charter, nor the authority of the Board of Selectmen.

In his prepared statement, he explained that the “primary motivator” for considering shared services is “the decline in population and the increase in median age of our population.”

“We will not be able to afford the services we have come to expect, services will need to be enhanced for an older population, we will have difficulty in populating our town boards and in obtaining elected officials and in financing long-term capital projects,” he asserted. “These eventualities require that we have a higher degree of expertise in the management of our town. In short, we need to be smarter in managing our resources and finances.”

“I’m very much in favor of shared services,” he declared. “We could have done a better job with professional help. Other towns have their annual budgets done much earlier than we do. Ours is done by home cooking. We need help with calculating and planning of deferred expenses, like benefits, and help with capital planning, which is on a spreadsheet on my home computer. We have an onslaught of deferred maintenance. And taking advantage of available grants through grant writing? We didn’t do it.”

Former Selectman Gene Talbot, however, disputed the need for a chief administrator. “I’m one of the old people in Stockbridge,” he said, nodding to Shatz, and I’m still working for the town. As a selectman, I always thought of myself as an executive. I moved here 60 years ago, to this idyllic village, and when I was on the board, we were the administrators. What is this ‘chief’ administrator? A shared administrator doesn’t make sense. We have three unique entities, in Lenox, Stockbridge and Lee, and three different, special cultures.”

And Bob Jones insisted that the selectmen make a decision, rather than deferring the adoption of the shared services plan to the annual town meeting.

“Nobody is against shared services, per se,” he said. “I am against the shared administrator, and against increasing bureaucracy. We won’t get a fair shake.”

But former Selectman Chuck Gillett asked the board to take seriously the questions raised by residents but to not act hastily. “I question that we know what our needs really are. I would ask the selectmen to look at the questions raised here, but not to make a precipitous decision tonight. How does this plan really affect Stockbridge? Will it work for us or not?”

In voting to withdraw from the shared services pact Selectman Chabon, nevertheless, observed that “I don’t accept gloom and doom. We have 34 elected positions in Stockbridge, 115 appointed positions. Our citizens are active. This plan has been a major distraction. This is our town, and we should not abdicate responsibility.”