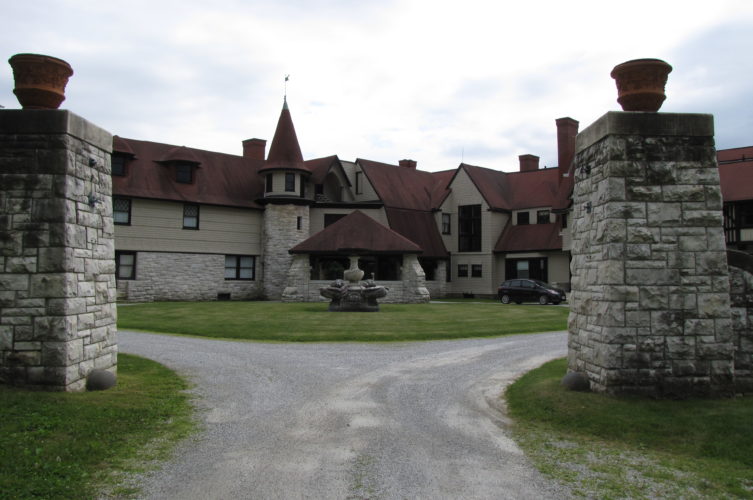 The entrance to Elm Court where Travaasa proposes a $50 million redevelopment and expansion.

Stockbridge – For the moment – until September 8 at least – the little guys have won, however illusory the victory may be.

Willing to give the residents of Old Stockbridge Road yet more time to marshal their legal resources, the Board of Selectmen continued until September 8 the public hearing on a special permit that would allow Denver-based Front Yard LLC to more than double the size of Elm Court, the 114-year-old, 90-acre, 96-room Gilded Age mansion and estate built by the Vanderbilt fortune and inherited by the Berle family.

Front Yard, a subsidiary of the real estate management and investment firm Amstar, purchased Elm Court from Robert and Sonya Berle for $9.8 million in 2012. The Denver developer thought it had a green light to proceed with its plan to build another of their brand-name “Travaasa” resorts, complete with a spa and 60-seat restaurant, when the town passed, in 2013, a Gilded Age-era estates bylaw, allowing alterations to historic structures and specifically allowing Travaasa to append a 50-foot high, 4-story wing to Elm Court.

In their way was the Old Stockbridge Road neighborhood, led by Barney and Julie Edmonds, and David and Jane Bloomgarden, among others, who presented the board with a petition with 130 signatures opposing the proposed expansion of Elm Court.

At the Monday night (August 4) hearing, the three-member board faced a standing-room only crowd in Meeting Room A of Town Hall.

At the end of 31/2 hours of testimony for and against the project, and in spite of the angry plea of Amstar CEO Gabe Finke and the entreaties of Lila Berle, whose family still holds an $8 million mortgage on the property, the Board of Selectmen unanimously postponed a decision, just as they had on June 24.

“I’m not prepared to make a decision tonight,” declared Selectman Deborah McMenamy. “I want to see a discussion between the neighborhood and the developers.”

She had questioned whether the bylaw allowed “amenities” – the spa and the restaurant – to be open to the public, as the developers had suggested, or whether they were intended only for the use of guests.

Board chairman Stephen Shatz warned opponents of Travaasa that the board would grant a continuance only for the purpose of receiving additional information pertinent to whether the proposed development complied with the terms of the bylaw.

“We have an obligation to act on the information you may have, but these people are entitled to an answer,” he stated. “We’re not going to let this go on for months.”

“We have lived for 16 years on Old Stockbridge Road,” Barney Edmonds told the board. “We are not against Elm Court. We encourage smart growth, but this is the commercialization of a rural neighborhood. We want to limit the size of the resort, not stop it. We ask that Travaasa come back with a smaller plan.”

And Julie Edmonds added: “People would never have approved the Gilded Age-era bylaw had they known what Travaasa was actually proposing. That vote was an emotional response to the family who previously owned Elm Court.”

The Edmonds explained that their lawyer, a development expert, and a traffic consultant were not available to testify at the hearing.

Finke made it clear he was frustrated – and more than a little disappointed.

“We don’t typically take on a project like this,” Finke argued. “We will be spending $50 million on a design that respects the Berle family, and this is six times what a hotel of this size would normally cost. Now we’re being vilified as if we were building a Wal-Mart or Marriott on Old Stockbridge Road.

“The facts are these,” he continued. “You won’t be able to see the resort from the road. It won’t impact traffic and safety, and it’s in keeping with the historic nature of the estate. And the Gilded Age estates bylaw was endorsed by a vote of 183-0 by voters, and approved by both the Conservation Commission and the Historical Commission. These are the facts.”

He added that in order to satisfy concerns about pedestrian safety, as traffic increased along Old Stockbridge Road, Travaasa was prepared to install a sidewalk between the entrance to Elm Court and Walker Street in Lenox – providing it could receive necessary permits.

And Lila Berle testified that the redevelopment of Elm Court was “important to the neighborhood, and it will leave open space.”

Her view was affirmed by Norman Rockwell Museum Executive Director Laurie Norton Moffatt who maintained that the project was in keeping with the character of the Berkshires.

“We are staunch preservationists,” she said, “and while we have many competing values here, I have to tell you that my job is to manage a great estate. Great estates are what make the Berkshires what it is. I stayed at a Travaasa property in Austin, Texas, and it was cared for impeccably. It was beautiful. There are few corporations that can take on a project like this. This property has been cared for by five generations of the same family, and it would be a disaster for it to end up on the market again. This is our greatest and best opportunity.”

But Old Stockbridge Road resident Gregory Whitehead of Lenox, president of the adjoining Bishop Estate whose 19 members had voted to oppose the development, interpreted the facts differently.

He insisted, as did other Old Stockbridge Road residents, that the development would forever compromise the character of the neighborhood and create a unsafe increase in traffic.

“We are not NIMBYS,” he proclaimed. “This proposal does not meet the five conditions of your bylaw. It will be a big-box motel, with a public spa and restaurant, and it is truly incredible that Stockbridge, who bravely resisted the installation of a ramp off the Mass Pike, would now be considering such a project.”

Finally, Planning Board member Kate Fletcher added her voice to the opposition.

“Through no fault of the Board of Selectmen,” she said, “the estates bylaw passed with minimal discussion. It seems reasonable to let the neighbors work with their attorney.”