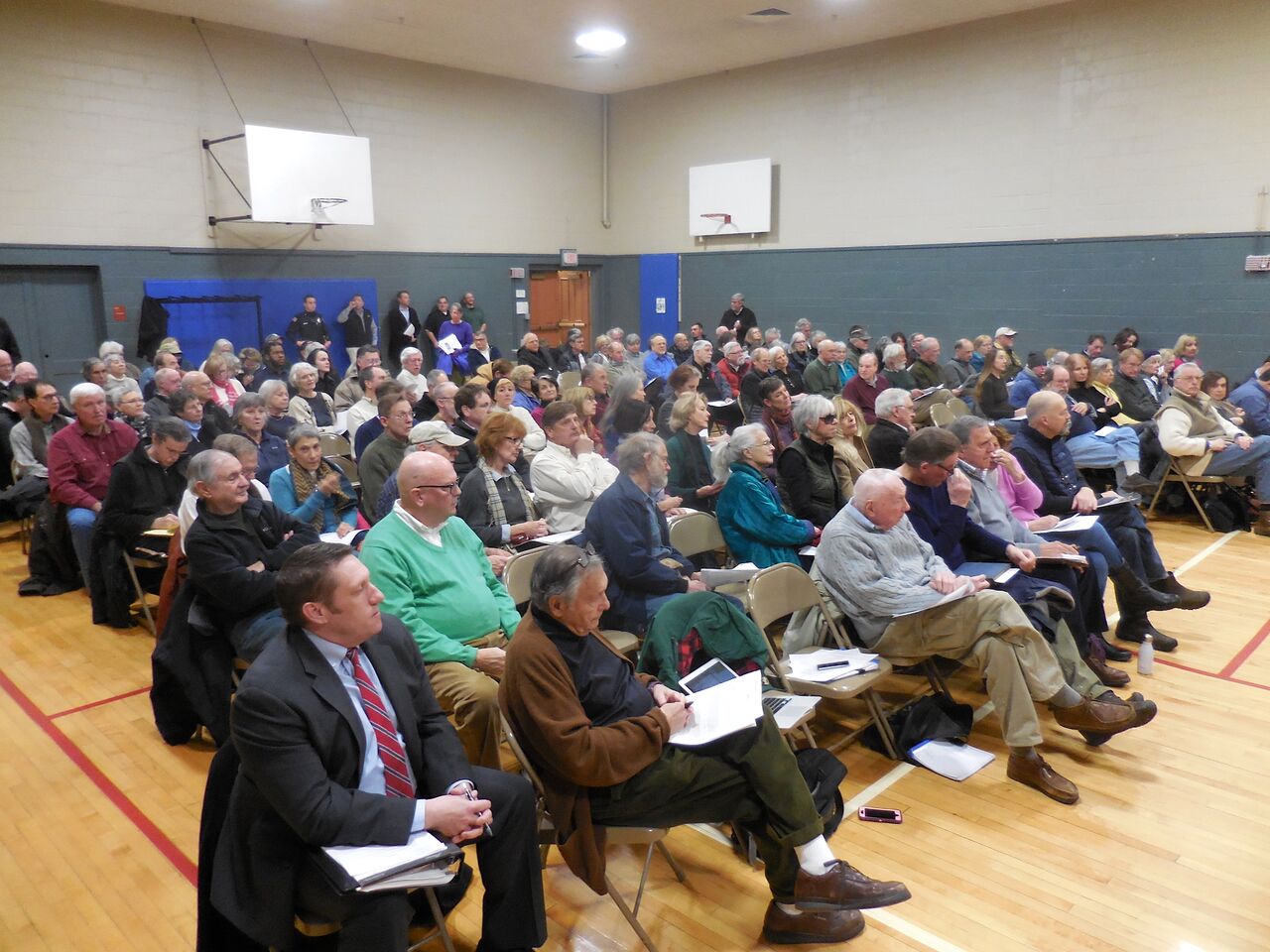 The gym at the Stockbridge Town Offices was packed for the hearing. Photo: Terry Cowgill

Stockbridge — It was as if this town’s most famous resident never left.

The specter of Norman Rockwell was literally hanging over the floor in the town offices on Main Street as about 150 people packed the small gymnasium Tuesday night (January 6) for a Stockbridge Planning Board hearing on a proposed change to the town’s zoning bylaws to allow for a massive redevelopment of the former DeSisto School property on Route 183.

In the end, the board voted unanimously to recommend that residents reject the rezoning at the annual town meeting in May, but not before two dozen people, including four lawyers, weighed in on the controversial project.

One of them, orthopedic surgeon Charles Kenny, strode to the podium carrying a matted copy of Rockwell’s 1943 oil painting “Freedom of Speech,” depicting a man voicing an unpopular view in a town meeting even as his detractors listened to him intently.

See video below of Dr. Kenny making his Rockwell speech:

Kenny said the developers, Patrick Sheehan and Tony Guthrie, have suggested that the board of selectmen has not been “cooperating or establishing a dialogue” and that “by inference the town isn’t,” either.

“The truth is just the opposite,” Kenny said. “Rockwell really had it right. Freedom of speech is not just the right to speak … one aspect is the right to listen.”

Kenny said, unlike the man in Rockwell’s iconic painting, Sheehan did not take advantage of the various opportunities he had to address the town directly about his project.

“If the dialogue was not started there, it was by Mr. Patrick Sheehan not standing up himself,” Kenny told the board. “Yes, we need lawyers to explain details and, yes, we need architects to show us pictures. But in Stockbridge, we stand up and explain to the town what we want.”

Indeed, the developers’ relationship with the selectmen appears to be dysfunctional. For their part, Sheehan and his attorney, Jonathan Silverstein, have accused the selectmen of exhibiting “prejudice” against the project. Furthermore, in a letter posted on their website, titled “Shocked and dismayed by the Board of Selectmen’s actions this week,” Silverstein says the selectmen made false claims about his client’s motives and tactics and have refused offers to meet with them and attend various open houses.

Sheehan has proposed a 40- to 50-room hotel and restaurant in the mansion formerly occupied by the DeSisto School at 37 Interlaken Road until it closed in 2004. There will also be 139 condo units adjacent to the hotel, 34 single-family homes near the rear of the 320-acre property, a restaurant and 15 to 20 acres of “sustainable farmland.” Click here to read Sheehan’s description of what he intends to do with the property, which he bought for $1.3 million at a public auction in 2009.

At issue is that Sheehan’s plan, which was reduced in scale after the selectmen and town residents were shocked when it was first made public a little more than a year ago, runs afoul of the town’s Cottage Era Estate zoning bylaw governing the development of a handful of historic properties in town that fall under that bylaw.

Under existing bylaws, the only way Sheehan could build the project was by special permit from the board of selectmen. The law requires that the vote be unanimous, which Sheehan and his attorney knew would be a near impossibility given some of the statements already made by the selectmen. And the law gives wide latitude to town boards in denying special-permit applications. Indeed, they can deny them virtually without explanation. Click here to read an analysis by Stockbridge town counsel Raymond Miyares, who was present at the meeting to advise the board.

So Sheehan and Silverstein came up with a different strategy: Use the petitioning process to place a revision of the zoning bylaw on the warrant of the annual town meeting in the spring. Click here to read the text of the proposed amendment.

A rezoning requires a two-thirds majority at town meeting rather than a unanimous vote of the three-member board of selectmen for a special permit. Those surely looked like better odds. In addition, site plan approval from the planning board is ostensibly less rigorous and more difficult to enforce than a conditional special permit.

See video below of Silverstein explaining the process and making his client’s case to the planning board:

But several abutters to the DeSisto property, some accompanied by lawyers with meters running, were ready to fight back. Rich Dohoney, who represents several abutters including Stuart and Susie Hirschfield, urged the board not to endorse the zoning amendment.

Dohoney called the proposed amendment “wholly inconsistent with your existing bylaw” and its purpose clause in the town’s zoning laws. Click here and scroll down to page 5 to read the purpose clause.

In his project overview submitted to the town, Sheehan estimates that 37 Interlaken, as he calls it, will provide annual revenues to the town of more than $2.4 million from real estate, personal property, hotel and meals taxes, as well as from water and sewer fees. He also says it will create hundreds of jobs, some seasonal and some year-round.

See video below of attorney Richard Dohoney urging the planning board to reject the proposal:

Great Barrington attorney Alexandra Glover represented abutter Victoria Sujata. She largely agreed with Dohoney and added that, under site-plan review by the planning board, a public hearing is not required and that a site plan has “no teeth for enforcement” of the sort a special permit does. Silverstein later disputed this.

Robert Tublitz, a retired planner who also taught at Columbia University, summarized his thoughts for the board. He also submitted a four-page analysis of the project. Click here to read it. Tublitz urged a complete overhaul of the zoning bylaws, which he said “are not sufficient to manage such a massive complex over a projected build out of some 10 to 15 years.” Click here to see his remarks.

There were a handful of people who spoke in favor of the proposal including Paul Lindenmaier, head of school at Berkshire Country Day School, where Sheehan has been a supporter and where he has sent his children.

He spoke of “increasing jobs so that current families can stay” and “increasing tax revenue … to meet a growing number of infrastructure problems in this town.” He pronounced himself “100 percent in support of a zoning solution” and added that he has known Sheehan for 10 years and that the developer “has deep roots in the Berkshires community” and contributes greatly to charitable causes.

See video below of Paul Lindenmaier:

Others in the audience who hailed originally from such places as New Jersey and Long Island wondered aloud whether Stockbridge – and the Berkshires in general – were at risk of overdevelopment and turning into the Hamptons North.

Others, however, insisted the town needed the revenue and the jobs – and, given the declining enrollments in Berkshire County schools, incentives were needed for young people to remain in the region.

“We need families,” one of them stated emphatically.

When planning board Chairman Gary Pitney finally closed the public hearing after more than two hours, some members of the board, especially Wayne Slosek, were sympathetic to the project.

But most of the others complained about the avoidance of the special-permit process and their reluctance to embrace a zoning change proposed by a developer for the benefit of the developer.

Finally, member Lisa Sauer proposed that the board urge voters at the town meeting to reject the zoning amendment. After half an hour of haggling over some conciliatory language that should accompany it, the motion passed by a vote of 7–0, with the stipulation that the zoning bylaw review committee “review the Cottage Era Estate bylaw as its highest priority.”

The bylaw will be voted on at the annual town meeting Monday, May 21.

The only member of the board of selectmen to speak was Terry Flynn. See video below of his remarks: