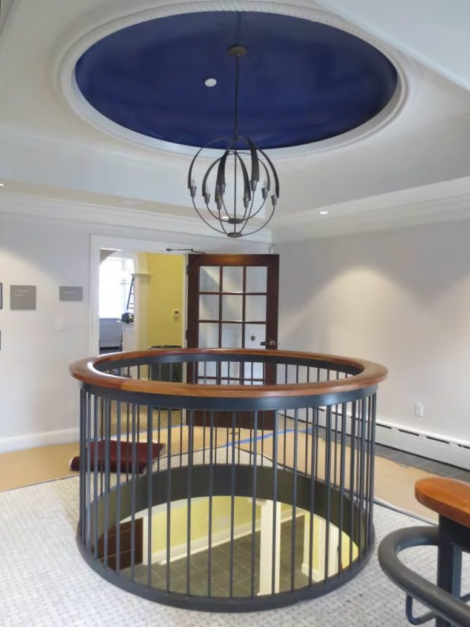 Stockbridge — Readers from all over are invited to attend the reopening of the Stockbridge Library this Saturday, April 30. The Stockbridge Library is a venerable institution that wants to make sure its public celebrates the reopening in style. It has planned a full day, beginning with a ribbon-cutting ceremony at 10 a.m. Festivities will continue throughout the day with music, performances, a scavenger hunt for both grownups and children, story time, face-painting, and, of course – because what is a celebration without them – balloons. Not to mention a cake in the shape of the library that will be as good to eat as it is commemorative.

The real push for the renovation came in 2011 when a building code review made clear to the library’s staff and board that serious renovation was needed. There had been an expansion of the building in 1937 and, in the early 2000s, the museum part of the library was upgraded, But as issues of accessibility and appropriate preservation of a historic building were raised, the staff and board knew that a full upgrade was in order.

To bring the whole building up to full code, compliance included installing an elevator, a sprinkler system, making bathrooms accessible, and adjusting stacks to proper width for wheelchair access. Katherine O’Neil, the library’s director, notes that, while the renovation was not just about wheelchair accessibility, the library staff and board are fully aware that the average age of Stockbridge residents is 54. And imagine how the board and staff felt when longtime library supporter and wheelchair-bound Jane Fitzpatrick was unable to attend the show the library mounted which featured the gowns she wore to inaugurals and other special events.

Moreover there are a number of volunteers in the museum and its archives whose physical limitations forced them into retirement because of lack of access, and that’s not counting the mothers with strollers who couldn’t maneuver the physical layout.

The Stockbridge Library Association began a capital campaign in 2013 and hired a consultant who pursued grants and historic tax credits, as well as a Massachusetts Cultural Facility Fund grant. The first supporter was the Stockbridge Community Preservation Committee. Both O’Neil and Barbara Allen, the library’s Curator of Museums and Archives, say quite frankly that, without the Community Preservation Committee, this renovation would not have transpired. But then there have been the private gifts, the most notable one from the Jane and Jack Fitzpatrick Trust. “Luckily town residents were supportive,” they both said.

Gary Corey, an architect with Centerline in Bennington, Vermont, designed the reconstructed building. The library closed in July 2014 after a used book sale. During the renovation the library’s temporary location was the now-shuttered Stockbridge railroad station. It then spent a bit of time at the Merwin House, operated by Historic New England which has properties through the region.

Unlike most public libraries, the Stockbridge Library is a private, nonprofit association. But like most public libraries, it is free of charge to the public. It offers a wide array of programs, appealing to readers of all ages. There is a preschool story time, a youth librarian outreach, and a speaker series throughout the year that features authors and experts on various topics. A new addition to its programs is an investment club for teenagers. The library has book clubs, museum and archive programming, cemetery walks during the summer, and, in winter, there are programs about houses in Stockbridge.

Periodically there will be programs on a wide range of subjects, from postcard collecting to tea drinking. The library presents “living history” programs with people dressing up and taking on the character of former Stockbridge residents. As Barbara Allen says, “ ‘Anything goes’ is our motto,” so long as the programs maintain a consistent level of excellence. She said they worked very hard to take the good parts of the building and the institution and enhance them, not change them.

The library association was begun in Stockbridge in 1862, in the midst of the Civil War. Impetus for the library came from Nathan Jackson, who said he would give $2,000 for it if the people in town would raise $1,000. Frances Dwight, who lived across the street from the land on which the library was built, donated the land for it. After raising money and erecting a building, the library opened in 1864.

There are two curious facts about the building of the Stockbridge Library. First, it was one of only five libraries in America that opened during the Civil War. And an addition was built during the Depression, when few libraries were expanding. It is also noteworthy for something it is not — a Carnegie Library. Philanthropic industrialist Andrew Carnegie lived in Stockbridge and, although he contributed to the building of 2,500 libraries throughout America, his generosity here was not needed.

The Stockbridge Library has just under 2,000 cardholders. Anyone who owns or rents a home or apartment in town is a resident for purposes of library use. In any given year, there will be about 35,000 visits to the library, many people stopping in more than once.

O’Neil and Allen agree that a 21st century library does not have to negate the library initiated in the mid-19th century. “We worked very hard to take the good parts of the building and the institution to enhance, not change, them,” said Allen. And, as of Saturday, Stockbridge’s many library fans will see for themselves that she’s right.