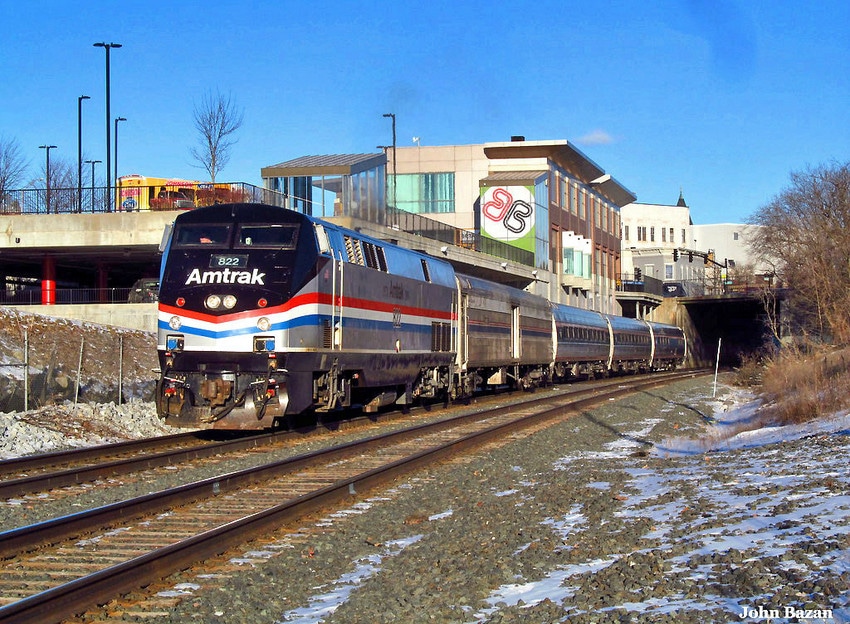 Amtrak's westbound Lake Shore Limited, between Boston and Chicago, departs Pittsfield's Intermodal Transportation Center. The intermodal center could get a lot busier if an east-west link between the Berkshires and Boston comes to fruition.

Boston — The cost of linking metropolitan Boston with western Massachusetts through a Boston-Worcester-Springfield-Pittsfield passenger rail corridor could be as high as $25 billion, according to cost estimates and other data released Thursday by the state Department of Transportation.

“We know how important enhanced rail service connecting Western Massachusetts and Boston is and this data gives us a better foundation to work from as we consider the options,” said state transportation secretary and CEO Stephanie Pollack.

“While the costs are sobering and the projected ridership numbers are lower than some might have thought, we will work with the Advisory Committee to develop cost-effective options to include in the final report this spring and work with our Congressional delegation because federal funding will clearly be needed.”

The sixth option is on the high end: the $25 billion possibility. MassDOT said service between Pittsfield and Boston would offer electrified service at top speeds of 150 miles per hour. It would take two hours and 18 minutes to travel from Pittsfield to Boston.

Option 1 is the least expensive at almost $2 billion, with annual operations and maintenance of $27.4 million. It would establish new passenger train service between Springfield and Worcester on the CSX rail line. In order to get to Worcester, passengers would travel on the MBTA Worcester Line between Worcester and Boston. There would be bus service between Springfield and Pittsfield. Projected daily one-way boardings is 36 individuals and the anticipated annual one-way boardings is 11,150 individuals.

The reaction of public officials who represent the Berkshires was one of frustration. Rep. Richard Neal, D-Springfield, told the Springfield Republican newspaper that the last major east-west transportation project he can recall was the Mass Pike in the 1950s. Neal added that the MBTA, which is the public transportation authority for the Boston area, is undergoing a five-year, $8 billion modernization plan for mass transit.

As Pollack pointed out, the project would require an infusion of federal money in order to be affordable. Neal, the dean of the Massachusetts congressional delegation, chairs the powerful House Ways and Means Committee, the chief tax-writing panel in the lower chamber. And like most Democrats, Neal is no fan of President Trump.

“So, I think it was Donald Trump who promised an infrastructure bill for the American people — and it was President Trump who volunteered a $2 trillion figure,” Neal said.

State Sen. Adam Hinds, D-Pittsfield, has been a rail advocate since his election to the legislature in 2016. Hinds pushed hard, for example, for the Berkshire Flyer, which will offer weekend service between Penn Station and Pittsfield via the Hudson Valley, and received funding from the state to begin a pilot program this summer. Hinds and state Rep. Tricia Farley-Bouvier, D-Pittsfield, were also co-sponsors of the bill that created the aforementioned East-West Passenger Rail Study.

“I’m not daunted by the cost projections in the slightest, compared to what we’re paying for major transportation projects elsewhere in the state,” Hinds said in an Edge interview. “This is a transformational project that only comes once every generation or two.”

Hinds noted that the MBTA has a $2 billion annual budget. In addition, a penny on each dollar collected by the state’s 6.26 percent sales tax (excluding meals) goes to fund the MBTA. That means Berkshire County residents fund the MBTA with every purchase, even though the MBTA’s services do not extend beyond Worcester County. Hinds said the best estimate he has seen is that as much as $30 million is sent from Berkshire County each year to fund the MBTA.

“It seems completely reasonable that we could find that money,”Hinds said. “It also seems increasingly clear which option is best for the future. Electrified, high-speed rail is clearly what we need.”

Some backers of east-west rail have been critical of MassDOT’s most recent data, insisting, for example, that costs are exaggerated and that ridership is underestimated.

Hinds did not challenge the cost estimates for Option 6 from MassDOT but said it would be money well spent. It could even relieve congestion and high housing prices in the Boston area by bringing more distant localities within commuting distance of greater Boston, he said.

Hinds does question the ridership estimates, which he says do not capture what he calls “induced ridership” potential or the rail equivalent of “build-it-and-they-will-come.”

“We think it would change the modes of travel people choose and home-buying patterns as well,” Hinds explained.

Karen Christensen, who runs the rail advocacy group the Train Campaign, declined to comment when reached by The Edge. The Train Campaign has spoken out in favor of various rail initiatives for Berkshire County and Litchfield County, Connecticut, including the East-West Rail Study, the Pownal line, the Berkshire Flyer, and the Housatonic Line.

The latter would connect the Berkshires with Manhattan, mostly by using an upgraded Housatonic Railroad freight line through western Connecticut and into Berkshire County. A bill presented by state Rep. William “Smitty” Pignatelli, D-Lenox, and its Senate equivalent presented by Hinds were “reported out” favorably by the state’s Joint Committee on Transportation.

That means, according to a summary of the Senate bill, MassDOT will convene a working group “to evaluate the economic and environmental benefits of establishing year-round multiple trip per day passenger rail service” from Pittsfield and New York City.”

The Housatonic line project has long been in limbo because of a reluctance of part of the state of Connecticut, which is experiencing significant fiscal problems, to invest in upgrading its portion of rail infrastructure for the project to proceed.

MassDOT officials said that currently only Amtrak runs continuous passenger train service between the state of New York and Boston, and this service is one round trip daily, with the train stopping in Pittsfield, Springfield, Worcester, Framingham, and in Boston at Landsdowne, Back Bay and South Station.

Hinds said the next step is a public meeting of the rail study group set for Wednesday, Feb. 12, at 6 p.m. in Springfield. Click here for more information. The advisory committee will meet Monday, Feb. 24, and will try to reduce the options from six to three and work on a final report.

This alternative is for new train service between Pittsfield and Boston, using CSX rail line between Pittsfield and Worcester and then MassDOT’s rail corridor between Worcester and Boston. This alternative requires double-tracks. It is within a shared rail corridor; utilizes the existing alignment; and includes station stops in Pittsfield, Chester, Springfield, Palmer, Worcester, Lansdowne, Back Bay, and South Station. Additional information:

This alternative is for service between Pittsfield and Boston on trains on a new alignment, meaning the trains would need their own new track. Stations stops: Pittsfield, Chester, Springfield, Palmer, Worcester, Lansdowne, Back Bay and South Station. Additional information:

This alternative is for new train service between Springfield and Boston on a new alignment, (similar to Alternative 4), meaning the trains would use their own new track. For this alternative, customers would travel by bus between Pittsfield and Springfield. Key segments east of Springfield would need realignment to straighten tight curves. Additional information:

Maximum speed: higher than alternatives 1, 2 and 3.