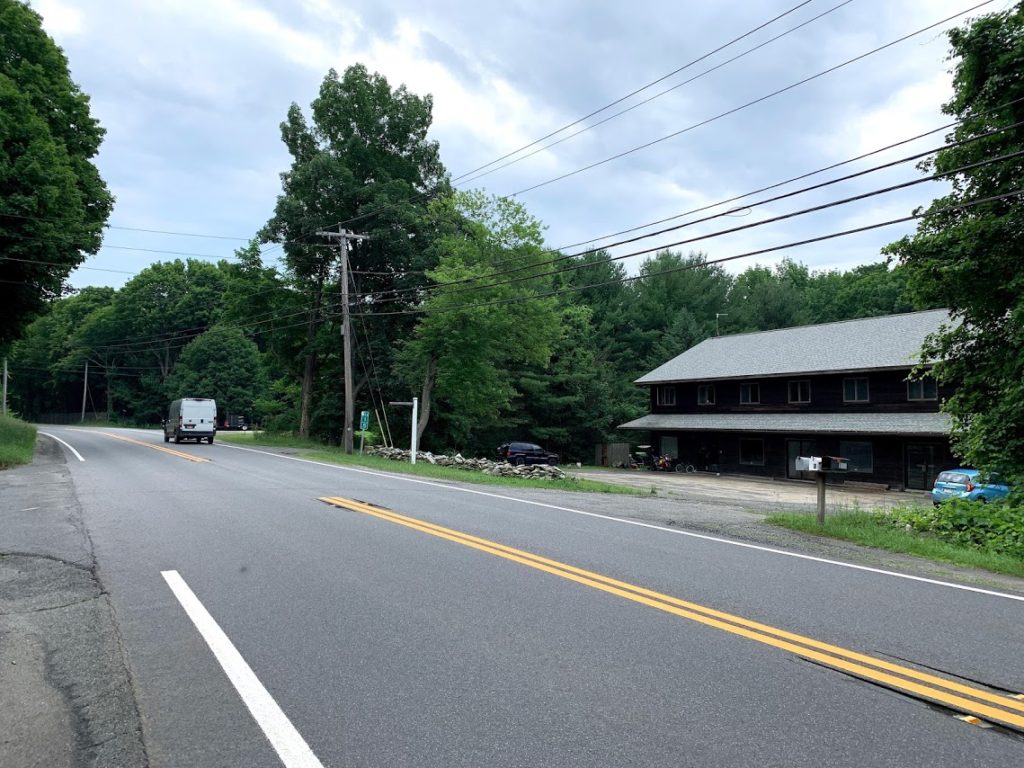 The view east on Route 23 from 195 Hillsdale Road, where Emerald River LLC had planned to locate an adult-use cannabis store. Photo: Terry Cowgill

Egremont — It looks like a proposal to locate a recreational marijuana store on Route 23 near the New York border has run into a serious obstacle.

At a select board meeting Tuesday morning, board member Mary Brazie repeated a motion she had made at a meeting on July 19: namely, to end negotiations with Emerald River LLC for a host community agreement at 195 Hillsdale Road. Brazie emphasized that her motion “does not close the door to negotiations with Emerald River at another location in Egremont.”

The motion passed 2-0, with Brazie and Lucinda Vermeulen voting for it and Chairman George McGurn abstaining because, he later told The Edge, “I was unmoved by the arguments against that location and wanted to hear from the other 80 percent of Egremont’s residents and taxpayers.” In addition, McGurn said he’d “like to see revenue from any community impact fee to go to the newly created Egremont Housing Trust.”

Emerald River LLC wants to open the store at the former Home interior design shop across the road from the western intersection of Route 23 and Taconic Lane, about a mile and a half from the New York state line. The proposal, unveiled at a community outreach meeting July 2, has spawned intense opposition from neighbors in the mostly residential neighborhood who are concerned about adverse impacts from traffic and light pollution, among others.

With the motion on the table, McGurn said he wanted to recognize town moderator Stephen L. Cohen, who is also an attorney and had his “hand up” during Tuesday’s meeting on Zoom, an online conferencing platform.

Cohen, who has practiced for more than 50 years and specializes in complex civil and criminal litigation, said his only concern with Brazie’s motion was that it could invite a lawsuit. Cohen quickly added that he was speaking only for himself and not for the town.

“This motion disturbs me because it’s almost like spot zoning,” Cohen explained. “What you’re doing is selecting a particular applicant for a particular place.”

Spot zoning typically benefits a single parcel of land by creating a zone for use just for that parcel and different from the surrounding properties in the area, often to the detriment of the parcels around the spot-zoned lot, according to the Legal Dictionary.

Almost all of Egremont is zoned residential. Click here to view the town’s zoning map and here to see the town’s zoning bylaws. Egremont is also a so-called “right-to-farm” community, so agriculture is a by-right use in the town’s sprawling general residential district. But a retail cannabis business wishing to locate in that district would need a special permit from the planning board.

Cohen urged Brazie to withdraw her motion and instead refer the matter to the planning board, which is charged with considering Emerald River’s special permit application.

While McGurn thanked Cohen for his comment, the suggestion fell on deaf ears. Before the vote was taken, McGurn said he would call on the president of Emerald River, Morriss Partee, who also had his “hand up” before Brazie made her motion. But Partee declined to speak on the matter.

“Now that this vote has taken place, I actually really don’t have anything further to add at this time,” Partee said.

Victoria Jenssen, who owns the property at 195 Hillsdale Road, noted that typically the board discusses a motion after it is made. But McGurn said that discussion had happened on July 19, when Brazie first proposed her idea.

“I am perfectly aware of parliamentary procedure, thank you,” McGurn told Jenssen.

Taconic Lane resident Helaine Kaplan said she wanted to address the remarks McGurn made at the last meeting.

“You are not recognized to address that topic,” McGurn replied. “The vote has been taken.”

Partee had made it clear that a major attraction of 195 Hillsdale Road was that the property is only a mile and a half from New York, where recreational cannabis use is still prohibited. There is, however, renewed movement in that state to legalize it.

Partee is planning another facility in the Middlesex County town of Maynard. Partee told the economic development committee on June 18 that Emerald River was scheduled to sign a host agreement with the town of Egremont on June 23.

Kaplan, a real estate attorney, had also called attention to the fact that Partee’s proposed store could have a negative impact on a planned cannabis store by longtime town residents Ari and Heidi Zorn in downtown South Egremont. Partee, on the other hand, is a longtime resident of Holyoke.

It is not clear what the next step will be for Emerald — whether the project is dead or whether Partee is eyeing an alternate location in Egremont. Emerald attorney Peter Puciloski had not returned an Edge message seeking comment by publication time. If he does so later, his comment will be added to this story.

There are at least eight recreational marijuana stores open in Berkshire County, including Canna Provisions in Lee and The Pass in Sheffield, which opened earlier this month. Rebelle in Great Barrington plans to open this summer, according to its website and social media feeds. Calyx Berkshire on Main Street in Great Barrington received its provisional license in January. At least three other outlets in South County are in various stages of the licensing regimen.

The cultivation, sale and use of recreational cannabis-related products was legalized in Massachusetts through a 2016 ballot initiative. The measure passed by almost 7.5 percentage points statewide, by roughly 30 points in Great Barrington and by a margin of 537-285 in Egremont. Implementation of the new law was left to the aforementioned Cannabis Control Commission. Preceding that law, medical marijuana was legalized in Massachusetts in 2012 through the same process.