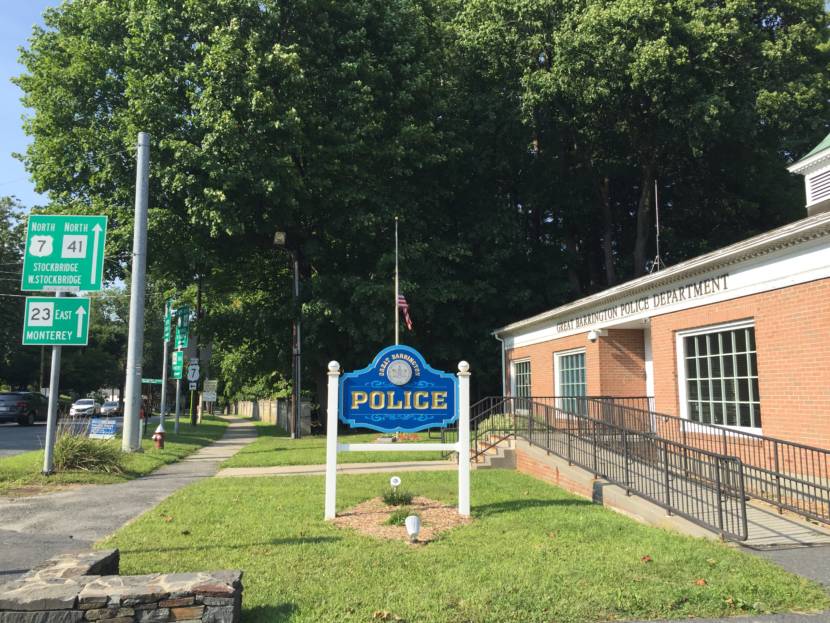 The Great Barrington Police Department is dealing with the aftermath of the arrest of Officer Daniel Bartini for operating under the influence of alcohol.

Officer Daniel Bartini was taken into custody by Massachusetts State Police in Westfield on Saturday after motorists called at approximately 5 p.m. complaining about a vehicle being “operated erratically” on the Massachusetts Turnpike eastbound near mile marker 17 in Becket.

Two parties had told police that Bartini’s silver-blue Chevrolet Silverado pick-up truck “almost struck their vehicles from behind and swerved around their vehicles at a high rate of speed,” according to a report prepared by Trooper Paul E. Savage, the arresting officer.

Savage, who was driving westbound in his cruiser in the left travel lane, noticed a vehicle approaching him from behind that matched the description of Bartini’s truck. The speeding vehicle (Savage estimated it was traveling between 75 and 85 miles per hour) passed Savage on the right, at which point Savage activated his blue lights and executed a stop at approximately 5:40 p.m near mile marker 22 in Otis.

While questioning Bartini, Savage detected a strong odor of alcohol and noted that Bartini appeared disheveled, had bloodshot eyes and speech that was slurred. When asked to do so, Bartini failed to produce his license and registration but did admit to having drunk “a couple of beers,” Savage said.

Asked where he was going, the off-duty Bartini said he was traveling from Great Barrington to Agawam. However, Savage noted that Agawam, near Springfield, was in the opposite direction from which Bartini was traveling.

Savage directed Bartini to exit his vehicle for a field sobriety test, which Bartini failed. He also refused to take a breathalyzer test and was taken transported for booking to state police barracks in Westfield, where, “At one point, Bartini became angry and punched booking room wall,” the report said.

A gun found in his truck, a Glock 43 TLR-6 and 10 rounds of ammunition, were confiscated and eventually turned over the Great Barrington Police Sgt. Adam Carlotto, who had traveled to Westfield.

Bail was set at $40. At around 11 p.m., Bartini was bailed out by Officer Jonathan Finnerty, his friend and colleague in the Great Barrington Police Department. Bartini was released on his own recognizance on the condition that he appear in Southern Berkshire District Court on Monday, April 29, at 8:30 a.m. to be charged with operating under the influence.

Bartini failed to appear. Great Barrington Police Chief William Walsh told the Berkshire Eagle the arraignment has been rescheduled to Monday, May 20, because Bartini is in rehab.

In an email to The Edge, Walsh wrote: “The town is aware of the incident. I’m extremely upset with this news and the department’s Internal Affairs Unit is conducting a full investigation into the off-duty arrest. A detailed report will be forwarded to the town manager very soon. The officer remains out of work. I consider this a very serious matter and it will be addressed accordingly.”

Bartini was involved in another incident involving drinking and driving in 2016. Early the morning of Aug. 20, 2016, Sheffield Police Officer Brennan Polidoro observed a black 2016 Chevy Silverado driving erratically on Route 7 in Sheffield. Polidoro said the vehicle was straddling the center line, drifting between marked lanes, and driving on center- and white-fog lines.

Polidoro pulled the truck over just after it crossed the Great Barrington line. In the driver’s seat he found an intoxicated and off-duty Bartini. Unlike the state police on Saturday, Polidoro did not perform any tests to determine Bartini’s sobriety.

Instead, Polidoro told Bartini to call someone to drive him and his intoxicated passenger home. Great Barrington Officer Timothy Ullrich later arrived to give the two a ride home.

On May 6, 2016, 25-year-old Great Barrington Officer Ryan Storti was killed in a one-vehicle accident on Prospect Hill in Stockbridge. Storti, who was also off-duty, had spent the evening drinking at the Heritage Tavern in Lenox, according to multiple sources.

A few days after that earlier incident involving Bartini, Great Barrington town manager Jennifer Tabakin announced that she and Walsh were beginning an internal investigation into “police issues.” Even after the report was completed, the results of that investigation were not released; nor was it ever disclosed whether disciplinary action was taken against Bartini.

At the time of the 2016 incident, Bartini was a part-time officer. According to a report Walsh submitted to the selectboard, Bartini, who will turn 27 next month, was promoted to full-time the following year after completing the police academy.

Meanwhile, the town of Sheffield began its own investigation into Polidoro’s stop of Bartini. The report concluded that Polidoro probably “violated the department’s impaired driver policy by failing to conduct a field sobriety test and/or arrest Bartini.” Click here to read the full report.