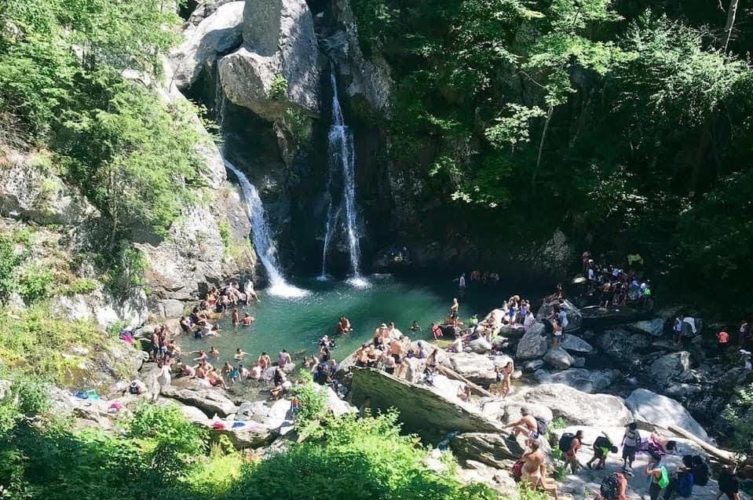 Editor’s note: This article now includes an email later received from Christopher D. Rickard, a manager of the Taconic State Park in Copake Falls, concerning parking on the New York side of Bash Bish Falls.

Mount Washington — Visitors to Bash Bish Falls, a popular state park that has seen large unruly crowds in the last several weeks, will have to find some other place to park if they want to access the falls from the Massachusetts side.

The closure is part of an effort to manage park capacity but the park itself remains open to visitors, added Dorrance, who said she wanted to remind visitors of the park rules, which include:

These rules have been flouted in recent days. Over the weekend, Massachusetts State Police patrolled the park. There were reports of injuries, with one person taken to Fairview Hospital.

One visitor writing on Facebook and describing the scene as “Hordes of people breaking every single rule,” said he saw picnic tables, loud music, alcohol and marijuana.

It has also been a dry summer, so officials have been especially worried about fires. One video, sent anonymously to The Edge, clearly shows a fire in a pit on July 14:

Dorrance also advised parkgoers to consider leaving if the location is crowded, and either visiting a different location or returning at a later date or time. Stay within solitary or small groups, and avoid gatherings of 10 or more people. Practice social distancing of at least 6 feet between individuals and wear a facial mask or covering in public, participate in only noncontact recreational activities, and practice healthy personal hygiene, such as handwashing, for at least 20 seconds. Dorrance also advised those who are ill, over 70 or are part of a vulnerable population to stay home.

Most visitors to Bash Bish Park access the park not from the Mount Washington side but from Copake Falls, New York, where there is a much larger parking lot in the Taconic State Park. A parks official in Copake told The Edge that the lot at the trailhead to Bash Bish remains open.

We are in the process of density reduction of Bash Bish Falls due to the pandemic and overcrowding and abuse of the natural resource. The article seems to suggest we have a lot of parking in NY. We are actually closing overflow parking lots due to the weekend overcrowding and have reduced parking. We expect to reach capacities for all our parking lots by 9 am Saturday and Sunday.