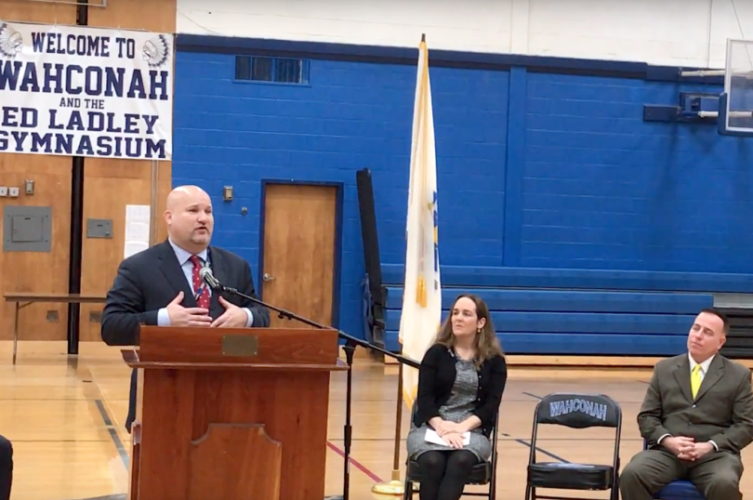 BOSTON — The state commissioner of education this morning called for elementary public school students to return to full in-person learning by April.

Riley said he would ask board members next month to give him the authority to instruct districts statewide to open their elementary classrooms full-time, five days a week, with the additional goal of getting all students back in the classroom full-time by the end of the school year, the Boston Globe reported.

“At some point, as health metrics continue to improve, we will need to take the remote and hybrid learning models off the table and return to a traditional school format,” Riley said, as quoted by State House News.

Riley added that parents would still be able to choose remote learning for their children through the end of the year, and school districts could appeal for a waiver from the requirement if they are unable to comply.

The Globe said Riley indicated he intends to accomplish this goal by ending temporary DESE regulations that have permitted the state’s school districts to operate in remote and hybrid models during the pandemic.

“We agree with President Biden … it’s time to get students back to school more robustly,” Riley said.

“I will be coming before this board in the next week or two ask you to authorize me to determine how best to come out of this pandemic and back to the traditional school model,” he continued.

President Joe Biden, who was inaugurated on Jan. 20, clarified last week that his goal is for most K-8 public schools to be open in person five days a week by the end of his first 100 days in office, which would be by the end of April.

Biden’s statement is aspirational because, unlike Gov. Charlie Baker’s administration, the president has no authority to order Massachusetts schools to return to in-person learning — or schools in any other state, for that matter.

Studies have shown that remote learning has been harmful to both students and teachers, with calls to suicide hotlines up and demand for mental health resources increasing since the pandemic asserted itself almost a year ago.

Lack of consistent schooling has likely led to 1 out of every 3 elementary students losing skills in reading and writing, two academics wrote over the summer in the Washington Post.

“Their worlds have been turned upside down at a time when their brain is growing and changing faster than the speed of sound,” wrote physicians Alice Kuo and Casey Nagel.

Many school districts, especially in urban areas, remain closed for in-person instruction and are operating remotely during the COVID-19 pandemic, while students in rural and suburban classrooms have typically returned to some form of in-person learning.

Since Nov. 3, the City of Pittsfield Public Schools had been in remote-only mode until this week, when all students will be in school at least part of the week, with the remainder of the week learning from home.

At the Berkshire Hills Regional School District, Superintendent Peter Dillon made the decision to postpone a return to full in-person learning on Feb. 1, in part because of infection rates.

At that time, rates seemed to be declining district-wide, until the second half of January, when they spiked in Great Barrington, as The Edge reported, because of a cluster outbreak in the town’s nursing homes.

In the hybrid mode, half the student population is engaged in face-to-face learning on campus with teachers and staff on Mondays and Tuesdays, with the other half reporting for the same on Thursdays and Fridays. No hybrid students are present on Wednesdays, when the custodial staff performs a deep cleaning of the buildings.

The date for a transition to full in-person learning for all the district’s students has not been set. Dillon declined to comment on the commissioner’s goal, but he was upbeat and said he was “buoyed by the recent downward data trends.” According to recent COVID-19 data, of the state’s 14 counties, Berkshire County has the lowest positive test rate and the lowest infection rate.

“We’ve worked hard to create safe spaces for students and staff and to afford families flexibility as we support student learning,” Dillon said. “I very much appreciate all the efforts students, families, and staff have made to be flexible in really challenging times.”

Dillon added that he looks forward to discussing the “range of possibilities” with the School Committee. A COVID-19 update is on the School Committee agenda for Thursday’s budget hearing. Click here to see the agenda, along with Zoom instructions, and here to see the complete packet, which includes the presentation for the proposed $30.3 million budget, an increase of 3.19 percent over last year.