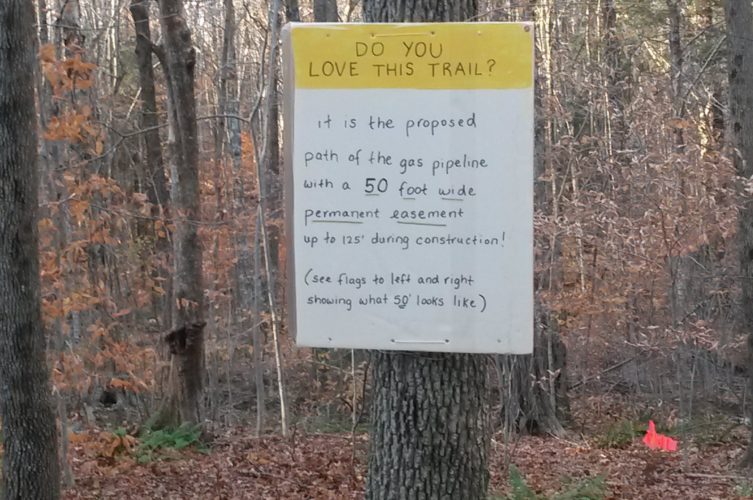 Boston — The release of the highly anticipated, state-commissioned energy study that will serve as a blueprint for determining the need for additional natural gas infrastructure, such as the $5 billion high-pressure Northeast Direct (NED) pipeline proposed by Kinder Morgan, has been unexpectedly postponed.

Slated for release on Dec. 23, 2014, the study was originally requested by citizens concerned with the state’s energy policy direction and opposed to expanding fossil fuel infrastructure. Ironically, preliminary study results, released on December 18, indicated more natural gas is needed to meet peak demand over the next 15 years. But the study also seems to have concluded that the proposed 36-inch Kinder Morgan pipeline would have far more capacity than the Northeast would actually consume, prompting speculation that the pipeline is actually intended to provided natural gas for export rather than serving the demonstrable needs of New England.

Further, the study appears to have marginalized the potential contribution of alternative, sustainable energy sources, such as wind and solar, much to the distress of environmentalists.

“The final models used for the study…have many assumptions that are simply not rooted in the real world,” said Rosemary Wessel of No Fracked Gas in Mass. “Collectively, they render the study useless to anyone looking to this report for energy policy development and useless to the people of Massachusetts.”

The study modeled eight scenarios in total – four under a “base case” demand assumption and the other four under a “low demand” case. The low demand case takes into account some alternative energy resources, to the extent to which they are technically and economically feasible. The four scenarios for each case included assumptions of high natural gas prices, low natural gas prices, and reference natural gas prices, with the reference prices modeled both with and without 2,400 megawatts of incremental Canadian-generated electricity. The Canadian transmission covers imported system power, primarily hydro with some nuclear, fossil fuels and renewables, coming from Quebec.

Synapse presented a long list of caveats to the study during the December 18 meeting. For example, the study assumed natural gas supply would be sufficient to meet demand and not constrained by production, and the study did not consider the impact of gas exports. The study did not consider the impact of pipeline investments on Massachusetts’s long-term reliance on natural gas, nor did it consider these investments’ potential displacement of alternative energy sources. Environmental impacts of pipeline siting and construction and of natural gas extraction were also not considered. Furthermore, alternative energy resources included in the low-demand scenario were not comprehensive in scope, with the growing number of small-scale solar installations left out completely.

According to a statement on the initial results released by Mary-Leah Assad, Communications Director for the Executive Office of Energy and Environmental Affairs, “The initial results of this study clearly demonstrate the need to continue investing in energy efficiency and pursuing clean, base load power, like large hydro and wind, to ensure affordability and reliability for Massachusetts ratepayers.”

The statement continues: “The draft study shows that – in light of power plant retirements – the Commonwealth will need natural gas to meet demand in the coming years. The Commonwealth continues to be engaged in discussions with the other New England states about our regional energy infrastructure needs and this information will help to inform those conversations going forward.”

Stakeholders favoring clean energy solutions and opposed to new gas pipelines expressed dismay that the preliminary study results ignored certain parameters set forth during the stakeholder process, and ultimately strayed from the original purpose of the study and from the Department of Energy Resources’ (DOER) Request for Proposal (RFP).

According to Katy Eiseman of MassPLAN, key requirements of the study’s purpose as outlined by the RFP were not fulfilled. These requirements include considering how existing infrastructure can be maximized to meet short-term peak demand, how market incentives can spur increased use of alternative resources, how fixing leak-prone gas distribution facilities can reduce natural gas demand, how any short-term supply gaps can be filled through extension of ISO-New England’s Winter Reliability Program, and how to meet emissions reduction obligations under the Global Warming Solutions Act Climate Plan.

The Massachusetts Department of Energy Resources received dozens of comments in the days following the December 18 meeting, with a commentary deadline of Dec. 22 at 2 p.m. In their commentary, citizens addressed concerns ranging from the modeling results’ failure to comply with the a state statute known the Global Warming Solutions Act (2008) to a computation error that grossly skewed the pricing of renewable energy in the base case scenario.

Energy analyst Dr. W. Dennis Eklof of Groton, Mass., pointed out the miscalculation in his stakeholder comment to DOER, indicating that the cost-savings calculation for wind power, for example, was off by a factor of 70, presumably the result of a spreadsheet formula that multiplies when it should divide.

Another key flaw with the study’s preliminary results, as expressed by concerned stakeholders, is that none of the scenarios modeled were in line with emission reduction targets as mandated by the Global Warming Solutions Act (GWSA).

“Massachusetts is already at risk of not meeting its 2020 committed GWSA target of a 25 percent reduction in emissions, but as this study concludes, more gas consumption just makes that goal more unachievable,” said Cathy Kristofferson of StopNED.

“Our goal was to understand how Massachusetts can meet both its energy needs and its GWSA targets, and reduce other environmental impacts,” added Eiseman.

One of the study’s caveats that Synapse acknowledged is the omission of comprehensive, life-cycle emissions estimates such as upstream gas pipeline leaks.

This deficiency was noted in the 350MA Berkshire Node press release. “The Synapse analysis also does not recognize the much higher global warming power of methane in comparison to carbon dioxide, methane leaks being a by-product of fracking and the transportation and distribution of fracked gas. Because of these omissions, 350MA-Berkshires concludes that results of the study are biased from the outset to overstate the degree of compliance with the GWSA.”

350MA Berkshire Node referenced a number of additional flaws with the study, such as failure to consider the impact of gas export, underestimating the amount of energy supplied by alternatives, not counting how additional liquefied natural gas (LNG) storage could help meet peak demand, ignoring environmental and health costs of transmitting fracked gas and ignoring environmental costs of pipeline construction, assuming construction of the Spectra AIM pipeline that has yet to be permitted by FERC, ignoring legislation to fix gas leaks, and ultimately ignoring the reality of global climate change, among other shortcomings.

In commentary emailed to the Low Demand Study team, Christopher Kilfoyle of Berkshire Photovoltaic Services referred to the study as “already flawed” and called out the gas and electric utility companies for creating a “false emergency” of natural gas shortages.

The Node’s Arnold Piancentini of Richmond called the study “a betrayal to all stakeholders with the exception of the electric and gas utility companies, the gas pipeline companies, and the gas industry lobbyists.” In a letter to the study team signed by Node members, Piancentini writes, “The undersigned conclude that the referenced report is not a study, but that it is a political statement,” concluding the so-called study “is riddled with flaws, false assumptions, errors and omissions, and that was designed to give an outcome consistent with the supply-push scenario for fracked gas, i.e. to justify additional pipeline infrastructure.”

According to Assad, the DOER spokeswoman, her department in conjunction with Synapse is currently reviewing stakeholder comments and aims to have a finalized report out sometime in the coming weeks.