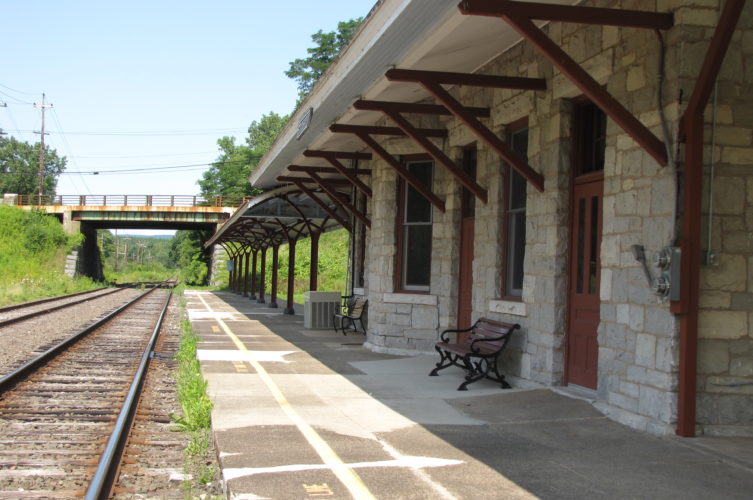 The restoration of passenger rail service from the Berkshires to New York City – a public transportation connection that ceased operation in 1971 – may be a bit closer to reality when the state Department of Transportation Board of Directors approved the purchase of the 37-mile rail line from Pittsfield to the Connecticut border for $12.13 million.

At its meeting Wednesday July 16, the board authorized MassDOT Secretary and CEO Richard A. Davey to execute an agreement to purchase the Berkshire Line from the Housatonic Railroad Company, a major step toward delivering passenger rail service between New York City and the Berkshires, according to a DOT press statement.

When finalized, the sales agreement would grant a permanent easement to the line’s current owner, the Housatonic Railroad based in Canaan, Conn., to continue its current freight service.

“This represents an awareness of all of us of where we want to go,” commented Colin Pease, vice president for special projects with the railroad. “Commuter service to New York is a critical component for the future of the Berkshires, for its long-term economic growth and success of the region.”

With the acquisition of the track and roadbed, the state plans to invest $35 million in initial track improvements, in the first phase of a two-phase program to upgrade the former New York, New Haven and Hartford line to passenger rail standards. It is estimated that it will take $113 million for track rehabilitation, installation of a signal system, improvements to grade crossings, and construction or reconstruction of four stations along the corridor.

A comparable expenditure of about $100 million will be required of the state of Connecticut to upgrade the railroad from the Massachusetts line to New Milford – just north of Danbury – where it accesses the MetroNorth shoreline route – and from Danbury west to a connection with the MetroNorth Harlem Valley line at Southeast, N.Y. So far, Connecticut has not committed to an investment in this rail corridor, although negotiations have been ongoing.

“This is absolutely a good idea,” declared State Sen. Benjamin Downing (D-Berkshire). “This is the first concrete step. This is a massive investment in infrastructure, and I think that when broadband arrives for most Berkshire communities and with regular and reliable rail service, it will be significant for the Berkshire economy. And I think this shows officials in Connecticut our commitment to this project. Governor [Deval] Patrick has put an enormous amount of his administration’s time into this project, as well as committing the state to assist Connecticut in upgrading the Pioneer Valley rail line.”

State Rep.William F. “Smitty” Pignatelli (D-Lenox), however, is skeptical that rail passenger service is feasible, and worth the money.

“I was surprised by this announcement,” he said from his district office in Lenox. “The governor had said that nothing would happen before we have a commitment from Connecticut, and we don’t. And I don’t think people are going to hop on a train to spend four hours going to New York when they can drive in two and a half. I want to see the purchase and sale agreement, because I want to know who is going to do the maintenance on the track, and where this $35 million will go. Further, I want to know who will operate the service. These are tough questions, but we need answers and sadly, we don’t have them.”

Still, he added that “if passenger rail is a possibility then control of the line is a good thing.

In Connecticut, the state owns the track and roadbed; the Housatonic Railroad leases it. A similar arrangement is likely once Massachusetts owns the Berkshire line.

According to DOT spokesperson Amanda Richard, it will take several months to finalize the purchase.

“The acquisition will also require approval from the Surface Transportation Board, to ensure the line will remain active for freight as well,” she said. “Track upgrades would begin at some point after that. The big news here is MassDOT is now one major step closer to acquiring the line, which would precede future track work to accommodate passenger rail service.”

Pease said that it was probable that reconstruction of the railroad infrastructure would not begin until next year.

“To get the ties and rails we have to get into the order cycle,” he said. He estimated that it would take two work seasons to complete the work.

“This is a two-stage process,” he said. “The first stage is replacing the oldest light rail — there are 30 miles of 107 pound rail — with modern, heavy welded rail. That would be the first target. The second phase would bring the entire line up to passenger line standards as soon as Connecticut joins us.”

The decision by the state comes on the eve of a Berkshire Regional Planning Commission public hearing in Great Barrington on where to site the railroad stations to serve individual communities and the neighboring towns. The meeting will take place Wednesday, July 23, 6 to 8 p.m., at the State Road Firehouse.

For the past year, the BRPC has been conducting the federally-funded, $240,000 study of potential passenger station locations.

Four years ago, the Housatonic Railroad commissioned a survey of likely travelers along the route from Pittsfield to Grand Central Station. The study found that if the service were reliable, with conveniences such as wifi, affordable, and frequent, it would generate 2 million fares annually.

Subsequently, Williams College economics professor Stephen Sheppard analyzed the economic impact of reintroducing rail service to the region. He found that economic benefit to the Berkshires would be $300 million in the first ten years of the service’s operation.