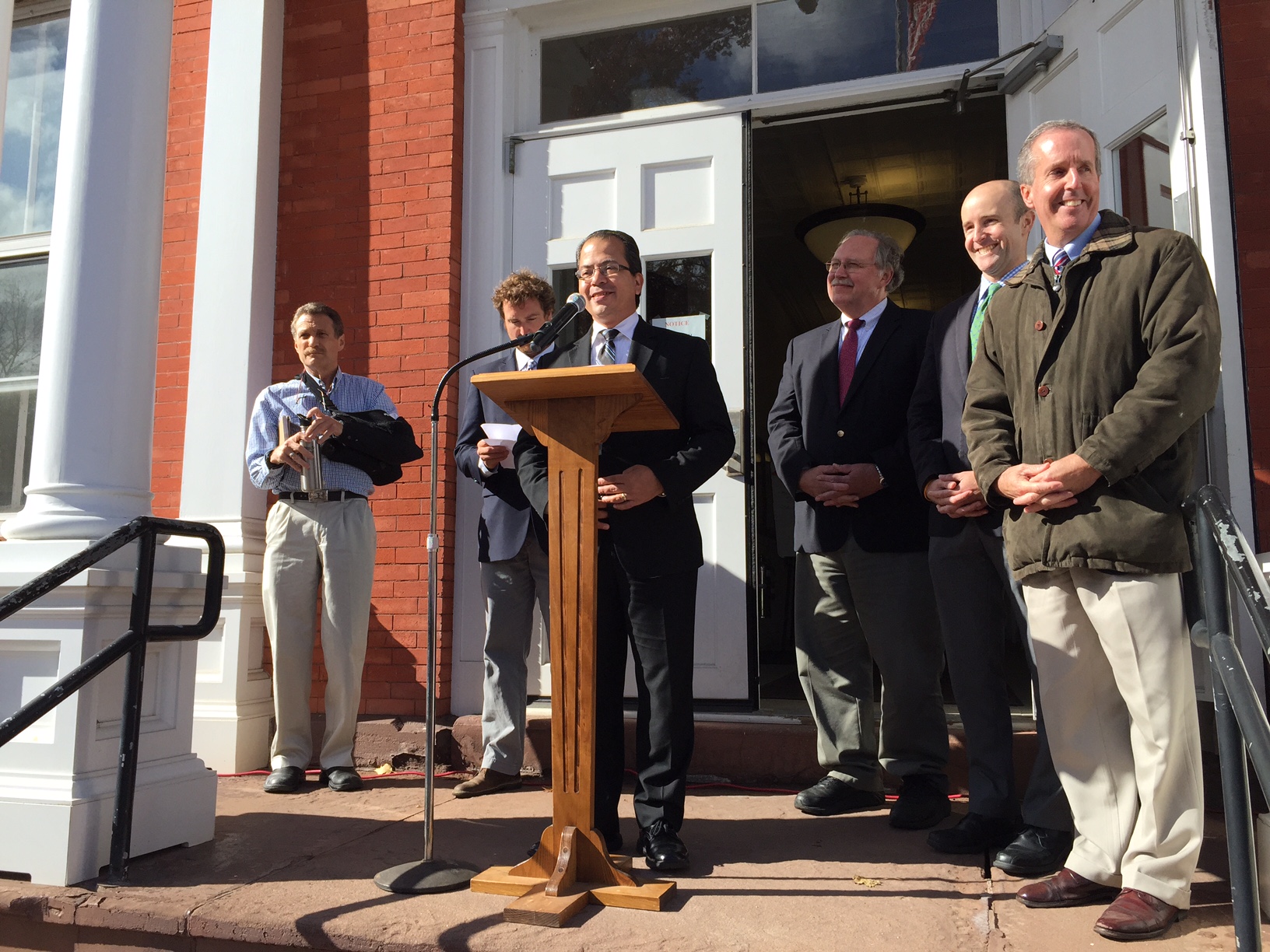 Great Barrington — Bridge Street and its surrounding area, and the development projects proposed or underway there, got a boost from the state today (October 30) when Assistant Secretary of Housing and Community Development, Juan Vega, stood on the sunny Town Hall steps and told the town that the $2.1 million it had asked for through the MassWorks Infrastucture Program was granted.

Vega made the announcement as the sun cut through some bitter gusts, and a crowd of local and state officials, thrilled with the total $8.6 million windfall distributed to 10 western Massachusetts communities, thanked and congratulated each other for making it happen in these rural hills, where small towns can’t keep up with the high costs of infrastructure upgrades.

The MassWorks grant comes through the Executive Office of Housing and Economic Development, for work to downtown areas that will support new jobs and housing. On Bridge Street the town will see newly paved roads, new sidewalks, improved drainage and lighting, and underground utilities. This will complement the Bridge Street bridge upgrade the state is paying for as well, as part of separate funding plan.

But Sen. Downing said it was the towns doing the “hard day-to-day work” necessary to put these applications in and convince the state they were worthy.

Apparently, it isn’t so easy. Town Manager Jennifer Tabakin, glowing with delight, said they got the money only after a second application round in which Rep. Pignatelli “came over and pushed us to reapply.” Both he and Tim Geller, Executive Director of Community Development Corporation of Southern Berkshire, who is developing 100 Bridge, a $40 million project on Bridge Street, helped Tabakin and Town Planner Chris Rembold improve the application, she said.

Indeed, this $8.6 million will help fix bridges, a shameful state of rural roadways, and an area of Holly, the third smallest town in the state, still reeling from hurricane Irene.

“I feel like I won the lottery,” Pignatelli added.

Rep. Kulick, a legislator for 22 years, said his hometown of Worthington needed this $790,000 to fix a crucial bridge that had been out of commission for several years. “The administration sees what small towns are up against,” he said, praising Baker and Polito for being “sensitive to the needs of Western Massachusetts…they are responding to what real needs are…in rural communities.”

In Great Barrington, Bridge Street is on the cusp of a development explosion. Geller said the CDC project, 100 Bridge, with its affordable and market rate housing, retail, restored riverbanks and possibly a large anchor tenant like the Berkshire Co-op Market, will stand to benefit the most. Despite a challenging cleanup of the polluted former New England Log Homes site, that project is set to move forward, Geller says.

Geller gave the state a backhanded compliment: “Western Mass is no longer Worcester,” he said, though he said he is genuinely thrilled by the Baker administration’s attention to the area.

There is the old Dolby Florist compound on the east side of the river, where redevelopers Bobby Houston and Eric Shamie are creating a small community of homes and an edible landscape. And there is the now controversial proposal on the table to raze the former Searles Middle and High School and replace it with a 95-room upscale hotel, The Berkshire, next to the newly renovated former Bryant Elementary School, now Iredale Mineral Cosmetics’ new world headquarters.

“The grant directly supports Jane’s [Iredale] reuse of Bryant, the CDC’s effort at 100 Bridge, and the Searles School redevelopment, whatever that may be,” said Town Planner Chris Rembold. “Those are three sites where everybody in town can agree that redevelopment or reuse is absolutely critical to the future.”

Rembold said the work would start sometime in the spring, and wouldn’t be a particularly disruptive undertaking.

As the October winds died down, politicians made their cracks about the glorious weather that greeted Assistant Secretary Vega as he ventured west for the second time since he was appointed. He smiled, appearing moved by the glorious view of East Mountain, and Rep. Pignatelli did his job some more.