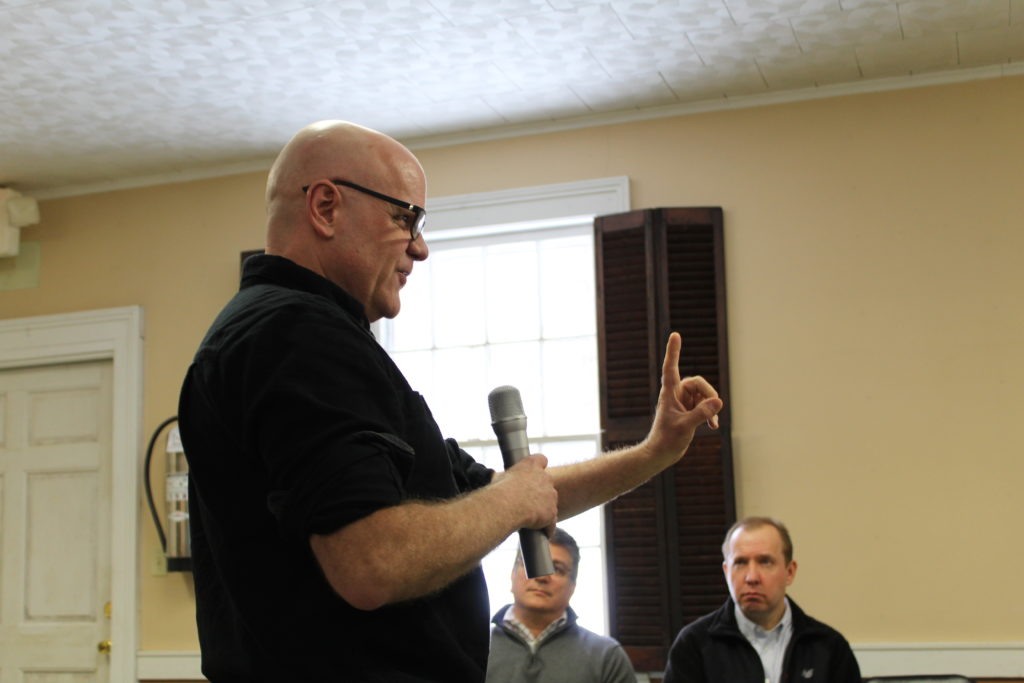 During a information session in April on providing Egremont residents with broadband, tech entrepreneur and musician Mark Tuomenoksa told the Egremont Technology Committee and board of selectmen how he has to spend exorbitant amounts because the town lacks high-speed communications infrastructure. Photo: Terry Cowgill

Westborough — The Massachusetts Broadband Institute has reached an agreement with Charter Communications allowing the telecommunications giant to provide broadband Internet service to five unserved towns in Massachusetts, including four in Berkshire County. However, the issue of underserved communities such as Great Barrington remains.

As part of its Last Mile initiative, MBI will provide Charter with a grant of more than $4.4 million to defray the costs of wiring the rural towns of Egremont, Tyringham, Hancock and Peru. Also included in the grant is Princeton in Worcester County.

After acquiring most of the Time Warner Cable’s franchises last year, Charter rebranded its cable TV and Internet services as Spectrum.

Once completed, Charter’s networks will deliver not only broadband Internet, but cable television and landline telephone services to residential and commercial customers in each town. Internet download speeds start at 60 megabits per second, but Charter officials say higher speeds will also be available.

The contract calls for Charter to provide a minimum coverage level of at least 96 percent of homes and businesses in the five currently unserved towns, and is contingent on each town negotiating and signing a cable television franchise agreement with Charter.

Charter is the dominant cable provider in Berkshire County, but Time Warner had not wired the smaller towns, maintaining that they are so sparsely populated that it would have been economically prohibitive to build out a network.

That’s why Charter, a Fortune 500 corporation that is now the second largest cable provider in the nation, is receiving money from the state. It is the only way most of those towns can get broadband Internet without borrowing.

“Today’s announcement delivers another point of progress in the Last Mile program and a path to broadband connectivity for the residents and small businesses in these communities,” Gov. Charlie Baker said in an MBI news release.

Not everyone was thrilled. Some, including Egremont Selectman George McGurn, prefer fiber over cable and are convinced that MBI favors large corporations over smaller start-ups that could actually do a better job. It is a charge that MBI denies.

MBI says the award was made under its Private Sector Request for Proposals, part of the Baker-Polito administration’s commitment to work with towns to address Last Mile broadband gaps. The RFP, MBI says, sought proposals “from qualified private-sector providers with an established track record of financial and technical expertise in the management and operation of residential broadband networks in the United States.”

“There’s no question this is an improvement over what we’ve got,” said McGurn, who recently became the selectmen’s representative on the town’s technology committee replacing former Selectman Charlie Flynn, whom McGurn defeated this spring. “It does move us closer to the borderline of the 21st century.”

However, unlike Flynn, McGurn remains an advocate of a fiber-to-home connection of the sort offered by Fiber Connect, a Monterey-based start-up that will soon wire both Egremont and Monterey for broadband Internet with speeds up to 1 gigabit per second, or about 16 times what Charter is offering. Charter’s Egremont system will include fiber optic lines into individual neighborhoods but will still use an old-fashioned coaxial cable into the home, which limits the speeds the company can offer.

“The technology will change and it’s clearly going in the direction of fiber,” McGurn said, adding that surveys showed a “vast majority of Egremonters want fiber.”

Helen Krancer is vice chair of the Egremont Planning Board and a former member of the technology committee. She has already signed up with Fiber Connect and wants nothing to do with Charter.

“It’s an old system,” Krancer said. “You’ll be using a very old technology and the town will be stuck with it.”

Krancer noted frequent complaints about Charter in Lenox and Great Barrington and wondered why Egremont would embrace the company.

Flynn, who chaired the both the Egremont technology committee and the Board of Selectmen that endorsed Charter, told The Edge, “I think it’s a step in the right direction. It’s going to make Internet and cable TV available to those people who cannot afford Fiber Connect.”

“I’ve been working on this for 20 years,” Flynn said. “When I first started out, we were just begging for a provider, any provider. Now we have two.”

MBI says it will cover 100 percent of the public costs of the grant to Charter, relieving the towns of the need for municipal borrowing. Charter has committed to completing the project within one year following the issuance of all necessary permits and authorizations, including receipt of pole attachment rights from local utilities.

McGurn said the Egremont Board of Selectmen got the ball rolling for Fiber Connect Monday by voting to give the company a “grant of location” that gives Fiber Connect permission to string wires on utility poles, though the company will still have to get the go-ahead from National Grid, the electrical utility that owns the poles.

Fiber Connect, which was disqualified from receiving MBI funding in March, has told the town it will wire between 70 and 80 percent of the town. McGurn said Charter representatives will attend the Monday, July 24, selectmen’s meeting to brief the town on the project.

This is the second award made to Charter under the Last Mile program, following MBI’s award in August 2016 to support construction of broadband networks in the unserved towns of Hinsdale, Lanesborough and West Stockbridge. That project, which is scheduled for completion in early 2018, was highlighted by Gov. Baker and Lt. Gov. Karyn Polito during a tour of small businesses in West Stockbridge this past May.

“I do give a lot of credit to Charter,” Pignatelli said in an interview. “They’re doing what we had hoped for years that Verizon and Time Warner would do.”

Pignatelli says he understands the disagreement in towns such as Egremont over which plan to pursue, but he is delighted to see some broadband relief in the unserved communities.

The next frontier, Pignatelli says, will not be the unserved towns but the underserved towns — growing towns such as Great Barrington and Lenox whose growth is limited by broadband that is simply too slow to support many types of modern businesses.

“Ten years from now, they could have slower speeds than some of the smaller towns,” Pignatelli said.

He noted that not only will Egremont and perhaps Monterey have a 1 Gbps connection through Fiber Connect, but the town of Mount Washington will have the same speeds with its own town-owned network. The speeds offered by Charter in Great Barrington max out at around 60 Mbps, 12 times slower than Fiber Connect.

“That’s not sufficient to run a business anymore,” Pignatelli surmised. “Technology is changing so quickly. Charter will have to keep up to stay competitive … They can make it faster.”

Pignatelli encouraged the town of Great Barrington to develop a plan and “put some cost numbers to it.” He said he has spoken to MBI officials and they have offered to look at it, but Pignatelli added that it was unfortunate that plans were not made during the recent Main Street reconstruction to bury fiber optic lines.

“They’d be more than happy to review what is proposed and validate it and talk strategies,” he said.