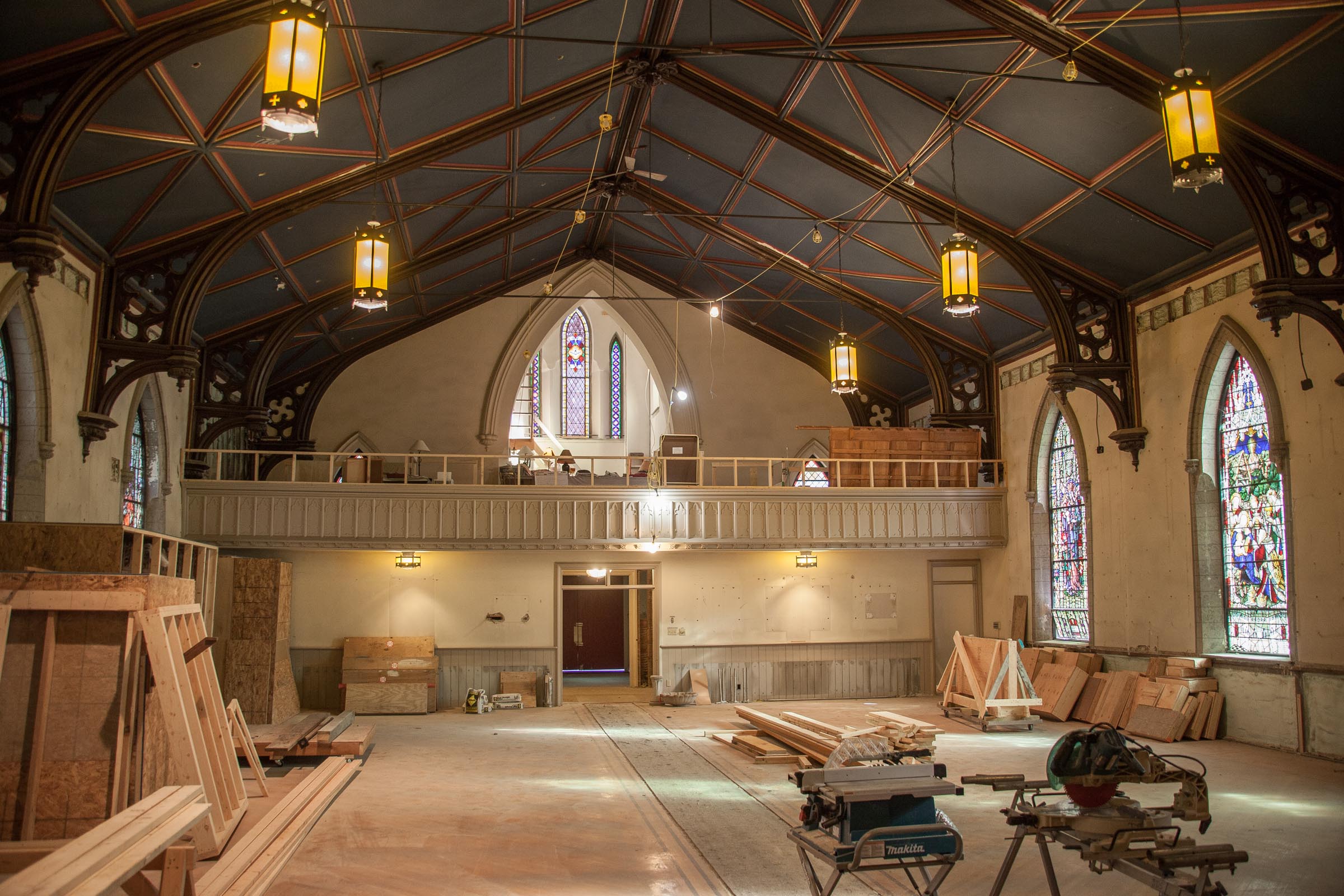 Driving by the corner of Main Street and Taconic Avenue in Great Barrington, you see a half dozen or more pieces of heavy construction equipment outside of St. James Church, giving you a strong hint that something major is occurring inside. And in a few months, you’ll be able to see a lovingly and elegantly restored historic building repurposed for the community’s benefit.

Sally and Fred Harris have been working for six years on the restoration of what they are calling St. James Place. What started as a heartfelt attempt to save the structure from possible destruction has morphed into a major cultural and civic center that will have activities seven days a week, all year long. Sally is president of St. James Place and chair of its board. “We are free labor,” she notes, referring to her very hands-on supervisory role in the renovation. “But my ultimate goal is to disengage. I’m not interested in running it.”

“When we started, we just wanted to save this wonderful building, but when we realized that it was wonderfully intact, we decided to save it and use it in the best and most useful way,” says Sally. The Harrises realized that the building’s central location and superb acoustics presented the opportunity to provide performances, musicals, lectures, weddings, gatherings, meetings, book clubs, and, well…you get the picture.

The Harrises lived in New York City but, for decades, spent weekends in the Berkshires. When the congregation left the building, Sally was concerned that it would be torn down to make way for a parking lot or a chain store. A member of the congregation for 34 years, she had developed a close personal feeling about both the congregation and the building itself: “I grew up in Dallas where they don’t have structures like this” she says.

When Sally realized that it was very questionable whether the church leadership wanted to commit the resources to restore the building, she decided they would do it themselves. She went to a foundation center in New York to learn to write a grant proposal. “The class teacher put me in touch with Bob Jaeger, president of Partners for Sacred Places, an organization devoted to the historic preservation of sacred places. With

their innovative programs, their message is ‘You are not alone.’” She found the staff to be conversant with many approaches to deal with the crises of historic buildings.

The Harrises moved to the Berkshires as the renovation of the church got underway. “We wanted to make sure it was happening as we envisioned it,” she says. Now their challenge is to create a business model that will make the endeavor sustainable. They believe that, once the renovation is complete, the overhead will be relatively low. Moreover, the multiple users can pay for its continuation.

Turning a church built in 1857 and a parish house erected in 1922 into a community center for the 21st century is, well, complicated. Indeed, historic preservation in general can be tricky. The Harrises want the building to look like a church but not in an overwhelming way. The building’s future lies in performance and office space, but there is a desire to maintain the integrity of its history.

Probably the most important quality for a performance space is its acoustics, which, in the case of St. James Place, are excellent. “We’ve been careful not to mess up the acoustics, which are vital to the activities we’ll have here,” she says. Given that the acoustics are first-rate, music groups are already signing up. Aston Magna, the oldest music organization that performs with period instruments, will be returning to St. James for its summer season in 2017. Crescendo, a Connecticut-based choral group, will perform there, too.

A number of arts organizations will be using St. James Place for office and performance space. There will be traditional theatrical backstage amenities such as professional lighting and sound grids, video projection, dressing rooms, audience amenities, and a green room. Berkshire Playwrights Lab will have its office at St. James Place and will rehearse there. And now that the end is almost in sight for the renovation, a lot of other organizations are interested.

There are three performance venues. The Harrises consulted with directors, actors, and singers to find out what their activities required. The sanctuary can have an audience of up to 300, and the configuration of its seats can vary considerably. There are two smaller spaces in the parish hall which are ideal for lectures, book groups, and the like.

In addition to the performance spaces, there will be six offices for rent to nonprofit organizations. Berkshire Playwrights Lab and Flying Cloud Institute have already signed up.

Sally Harris is quite explicit about her goals for St. James Place, which include both social and cultural activities. There will be a commercial kitchen on the premises. “We’re working on policies and procedures for that,” says Harris. The People’s Pantry will have a dedicated entrance on the Taconic Avenue side, which is only a half-block from a bus stop. For both Aston Magna and the People’s Pantry, their presence at St. James Place is a return “home,” since both began life at the church.

The Harrises intend to make the most of the green spaces in the front and back of the building. A 180-year old maple stands majestically on the corner of Main and Taconic and will make an impressive centerpiece to that garden.

This has been an enormous undertaking for the Harrises, but the end is in sight: they hope that the work will be completed by early fall. Fred Harris sums up their efforts with St. James saying “the building has been here for 150 years; we are restoring it so it can go on for another 150.”