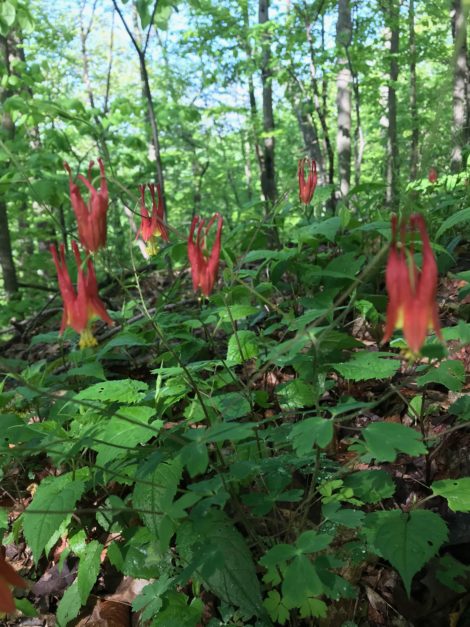 Carolyn Newberger
Columbines, like fiery hands reaching for the sky, in the forests of Lenox, Massachusetts.

Spring has rolled in like the tide. Slowly at first, with bits of green lapping at the shore, then accelerating with ramps, catkins, leaves like squirrels’ ears high in towering branches, ferns unfolding stiffly, reaching for the shards of light that still penetrate the forest floor, day-glow green tufts of grasses, spreading day by day from sun to shade.

Each day brings new delights. We stumble on a cluster of columbines, almost hidden between rocks on top of the steep hill to Balance Rock in Kennedy Park, miniature orange bells with spiny jester caps on lanky stems. Spatulate leaf clusters throw up pale yellow flowers that seem as ephemeral as the breeze. Yesterday I photographed six different flowers, all blooming within days. 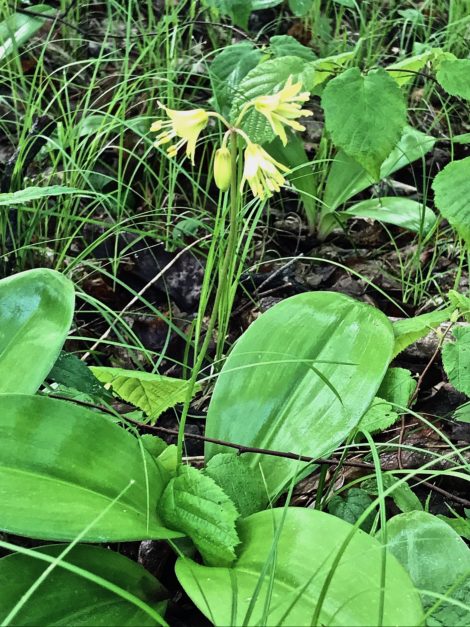 The view of a distant swamp from Balance Rock closes in as the trees leaf out, encircling us within ever more intimate landscapes. So now, freed from the distance, we are more tuned in to the proximal events of this burgeoning awakening, such as the freshening mosses brightening on stones and the daily enlarging of leaves on the basswood trees.

This is the season for morels. The ramps are gangly now, laying down their yellowing leaves on the ground. Their leaf season is just about over and their flowering has not yet begun. But morels!! These are the prizes of spring.

Last Sunday, I joined the Berkshire Mycological Society for their second weekly hunt of the season. This is a loosely constructed group, with no membership, but with one good soul, John Wheeler, putting up a schedule of walks on a website.

At 10 a.m., an assortment of people carrying bags and baskets showed up at Gould Meadows in Stockbridge. The subject was, of course, morels, those elusive, delectable, most sought after of mushrooms. With instructions to look under ash trees, and a brief primer on how to identify them, we fanned out into the field and into the woods beyond. No luck, so we headed back to our cars and took off for Kennedy Park. 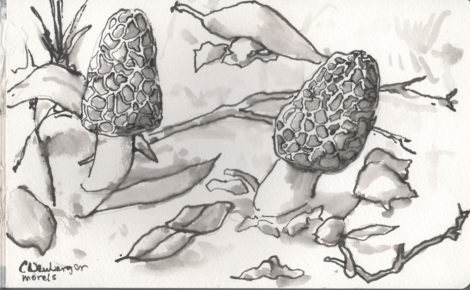 A sketch of morels abiding by an ash tree. Illustration: Carolyn Newberger

With legs of iron, John hurried us up a trail that I dare not name (people are very secretive about morels) to another trail where morels have been found. Alas, most of the people fanning out through THOSE woods, eyes on the ground, found no morels, though John and another person with a rather professional looking basket found several.

Needless to say, since that foray, for the entire week, eyes on the ground, senses tuned to ash trees, I have been in hot pursuit of morels. I have found two. The ratio of search to find is about a million to one. My poor husband’s daily hike has been proceeding in fits and starts as I dash off the trail toward yet another stand of ash trees that I am certain are nurturing the mother lode of morels that will make all this worthwhile.

I don’t think that I have mentioned why morels favor ash trees, a piece of information I learned at John’s of the Berkshire Mycological Society’s knee. In the teeming underground world of the forest, through their roots, many trees form symbiotic relationships with fungi called mycorrhizae. The fruits of the fungi are the mushrooms. Trees in relationship with different fungi will be associated with different mushrooms.

The problem is, mycorrhizae fruit at their own pleasure, not ours. So on the day that I found two morels, hardly enough for dinner, I went into our local market, where for $39.95 a pound, some expert and enterprising mycologist had supplied them with morels to sell to people like me. I carefully and parsimoniously selected just a few more, about $8 worth. Although I am just a little bit sheepish, I do believe that the deliciousness was enhanced by their value in labor for two, and dollars for about four more.

The coda to this story is that now, in late May (don’t forget that last year I found my first morels in June), I am still in hot pursuit, but with an agreement with Eli that he continue at his own pace and the responsibility is mine not to get lost and to catch up.