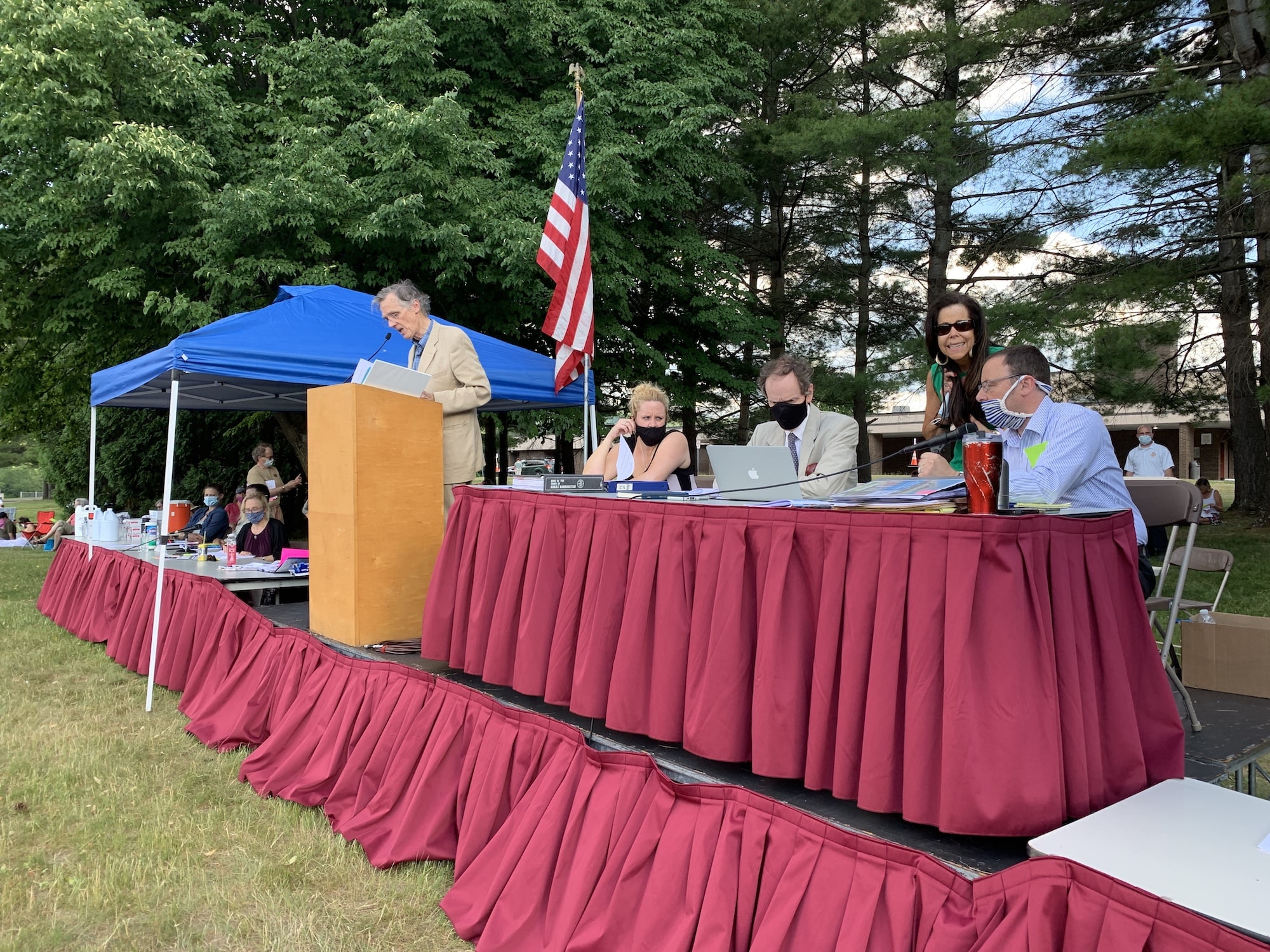 Editor’s note: After the Edge’s inquiries, the Coalition for Sensible Cannabis Regulation in Great Barrington publicly identified its charter members on its website. The list has been published at the end of the this article.

Great Barrington — The Great Barrington annual town meeting, typically an unwieldy multi-hour affair, was mercifully shortened this year because of the COVID-19 pandemic. Officials said it was important for reasons of public safety to have a relatively brief meeting to get the budget passed before July 1 when the new fiscal year began.

That meant voters had to agree that certain articles on the warrant must be passed over until a special meeting could be held. That special meeting will be held Tuesday, Sept. 15, at 6 p.m. in the parking lot of Monument Mountain Regional High School. Click here to view or download the warrant.

Most of the articles in the warrant concern proposed amendments to the town’s zoning bylaws. Presentations by town staff and ensuing discussions can be lengthy, so back in June, they were shunted off onto the special town meeting. Click here for a “A Brief and Unbiased Explanation of the Articles in the Town Meeting Warrant” prepared by town staff.

Perhaps the most controversial material includes articles 25, 27 and 28, all of which concern cannabis. Article 25 would, among other things, limit the number of retail cannabis stores in the town to seven, which is the same as the number of full-service liquor store licenses available in the town.

Article 25, recommended by the planning board, would not appear to pose a hardship on existing organizations. There is currently only one store, Theory Wellness, that has been operating in the town, though five others have signed host community agreements with the town. Rebelle, on South Main Street, announced on its website that it officially opened for the first time Sept. 10.

The other two articles found their way onto the warrant through citizen petitions. Article 27 would allow by special permit cannabis retailing and manufacturing — but not cultivation — in the I-2 zone, which incorporates portions of downtown Great Barrington. That proposal is also recommended by the planning board.

But Article 28 is another matter. Its proposals include expanding the required distance between marijuana establishments and areas where children commonly congregate from 200 feet to 500 feet. Those areas include not only schools and child care facilities but public libraries, playgrounds, athletic fields and churches. The planning board opposes Article 28.

The Edge recently received a press release opposing Article 28 from a group calling itself the “Coalition for Sensible Cannabis Regulation in Great Barrington.” The coalition urges a yes vote on articles 25 and 27. The release was sent by Kimberly Rawson Communications in Pittsfield. It did not identify any members of the coalition, which the release said “includes Great Barrington residents, voters and business owners.”

The release also included a link to the coalition’s website. Like the release, the site lists no names, but at the bottom of the home page is a line that copyrights the site to 82 Railroad Street LLC, which is the name of the limited liability corporation proposing to open a cannabis retail store at a former Great Barrington bakery at that address.

The manager/proprietor of 82 Railroad Street is Paul Aronofsky of 35 Park Ave. in Manhattan. In an Edge interview, Aronofsky acknowledged being the driving force behind the coalition, though he declined to name other members, referring that question to Rawson, who said she had not yet received permission from other coalition members to release their names but would do so as soon as she could.

Aronofsky said he has successfully negotiated a host community agreement with the town and has obtained a successful site plan review from the planning board. His building permit, however, was rescinded earlier this year after Article 28 was placed on the town meeting warrant.

82 Railroad St. is approximately 450 feet from the Great Barrington Congregational Church on Main Street, Aronofsky said. If Article 28 passes on Tuesday, Aronofsky’s business would be prohibited under the new zoning amendment.

“Basically this 500 [feet] takes in all of downtown Great Barrington, so that’s why we believe it would be detrimental for Great Barrington and for business,” Aronofsky explained.

Further attempts to identify other members of the coalition were unsuccessful. Alexander Farnsworth, who told The Edge he is close to opening Farnsworth Fine Cannabis Company on Main Street, said he is not a member of the coalition.

“We are not part of the coalition,” Farnsworth said in an email. “In fact, no one from the coalition has ever reached out to us.” Farnsworth, whose business was formerly known as Highminded, received a provisional license from the state Cannabis Control Commission in April, though he was not yet ready to disclose a grand opening date.

Thomas Winstanley, marketing director at Theory Wellness, also told The Edge that Theory is not a part of the coalition and has not been approached on it. Representatives from Rebelle and Calyx Berkshire, which plans to open on Main Street, did not respond to requests for comment.

If Article 28 passes, it would exclude new cannabis stores from much of the downtown core because of its churches, parks and athletic fields. Though it has not opened yet, Calyx Berkshire is located on Main Street next to Tom’s Toys, which has troubled some town residents.

The lead petitioner for Article 28 was Housatonic resident Michelle Loubert, a longtime Town Hall watchdog and member of the town finance committee. Loubert explained her reasoning to The Edge.

Loubert and several residents in Housatonic and the nearby Van Deusenville Road were opposed to a proposal by Fulcrum Enterprises, since withdrawn without prejudice, to grow cannabis and manufacture related products in the former Nolan gravel pit across from the Formel junkyard at 22 Van Deusenville Road. Opponents of the project thought the town’s cannabis bylaws were weak compared to other towns.

“The Great Barrington bylaw, we found, left our neighborhood areas vulnerable to large projects such as the Fulcrum project,” Loubert told The Edge, adding that other towns in Berkshire County are reassessing their cannabis bylaws as well, including Cheshire, Hinsdale and Williamstown.

Some members of that group drafted and presented the bylaw before the planning board at its official public hearing on the board’s zoning proposals in March. Loubert added that the proposed amendment was reviewed by an attorney.

Loubert’s name is on the petition because she was the person who submitted it to the town clerk’s office. She plans to present the amendment on Tuesday night, though others from the group also plan to speak in favor of it.

Other items to be voted on include the sale or transfer of a home at 40 Grove St. to the town’s affordable housing trust; an additional $50,000 for the wastewater treatment plant because of increased sludge disposal prices; and a proposed tax increment financing agreement for 430 Park St., the former Housatonic Curtains property.

The special town meeting will again be conducted in a drive-in style in the parking lot of the high school. Town officials say voters planning to participate must enter the driveway on Route 7 and proceed to the main high school entrance area. There, they will be checked in and given the warrant, supporting documentation and colored voting cards.

Check-ins will begin at 5 p.m., an hour before the town meeting begins. Participants will be able to follow along, as all audio will be broadcast locally on 90.5 FM. There will also be additional lighting set up in the parking lot. Click here to see a map outlining the flow of traffic and layout of the meeting.