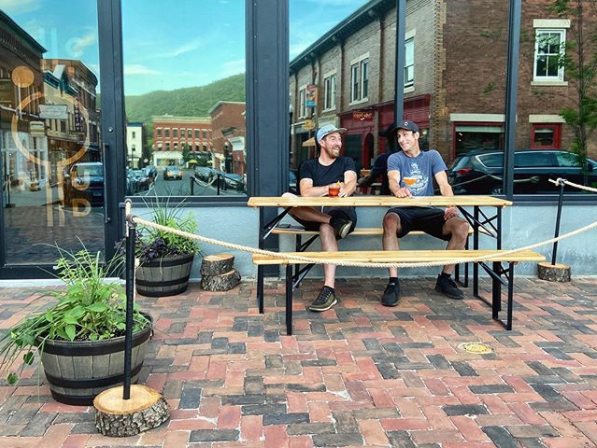 Great Barrington — The intense heat and pressure of summer plus the continued challenges of COVID-19 are shaping up to equal some proverbial diamonds in the South County dining season by summer’s end — or, if you are a fan of slurping oysters on the half shell, as quickly as this weekend. In the continued spirit of collaboration, Josh Irwin, chef/owner of Cantina 229 and MoonCloud, has taken to thinking outside of the box. “I’m feeling more blessed and flexible than ever before,” said Irwin in a nod to his newest venture: a nonprofit — the Community Revival Initiative — intended to create a safe, comfortable downtown space for people to enjoy nights out again while showcasing other businesses.

Hivecloud, located across the railroad tracks in the grassy lot at the top of Railroad Street, is Irwin’s attempt to provide a platform for struggling restaurateurs to “do some business and create some buzz” downtown. The goal is simple: if not immediately to pump money into businesses, then to toe the line and stand united with other like-minded individuals to navigate this summer safely and “still be there on the other side.” Irwin and Billy Jack Paul of MoonCloud have partnered with Hive, an events-coordinating business based in Boston, to bring a converted Airstream trailer to town. There, on Saturdays and Sundays from noon to 4 p.m., they are serving beer, wine and cocktails; Irwin is slinging lobster rolls; and Austin Banach and Hedley Stone of Inland Oyster Company are shucking mollusks to order. They have created what Irwin calls “a beautiful and conscientious social-distance outdoor space” free from tables and the fear that comes from wondering, “Who sat here last?” and “Was everything properly sanitized?” The space, outfitted with giant circles painted on the lawn, invites guests to drop a picnic blanket and enjoy a shared yet separate space intended to bring more buzz to Great Barrington. Ordering is done by QR codes, creating a touchless system for ordering food and drinks.

Inspired by the vibe of Portland, Maine; Burlington, Vermont; and Nantucket, Irwin is striving toward what he calls a “non-compete moment” with other businesses, aimed at infusing Great Barrington with new life. “I think in the future this could be some sort of secondary option for businesses to band together,” he said in a nod to the sheer volume of people living here and the concentration of creative minds. “Owning a local business is a risk that takes a lot of sweat equity, but for the betterment of our community,” said Irwin, who sees living in the Berkshires as coming with the responsibility of supporting what we love about this area: from nonprofits and arts organizations to farmers and restaurants. Over the past four months, restaurant owners have been forced to get creative — really creative. Last month’s reconfiguration of Railroad Street to create additional space for al fresco dining on Friday and Saturday evenings was met with enthusiasm.

“This [pandemic] has affected every business, even grocery stores, who are busy but short-staffed,” said Betsy Andrus, executive director of the Southern Berkshire Chamber of Commerce. “A good majority have been affected monetarily, [and] many fear surviving.” Restaurants, she pointed out, have had longer to deal with the changing landscape than, say, retailers. The Railroad Street road closure, which will happen at 5 p.m. throughout the summer regardless of weather, has created a designated space for a handful of eateries — including Baba Louie’s, 20 Railroad Public House, Siam Square, SoCo Creamery and Bizen — each of which boasts tables 6ix feet apart and 36-inch walkways. “They have gotten creative, and this is good for us,” Andrus said, citing too many business owners who want to operate as they did 30 years ago without changing. Retailers are now having to think outside the box to stay safe, generating new ideas, many of which will be executed. That said, “what works for one is not going to work for everyone.”

Irwin is not alone with novel ideas that are gaining traction. Mark Firth has created a pizza garden at the Prairie Whale, thanks to the addition of an outdoor wood-fired pizza oven, and capped his expansive lawn with a large, white tent; the Old Inn on the Green has created a newly expanded and fully tented outdoor patio — boasting a whopping 1,200 square feet — and a $55 prix fixe tasting menu throughout the summer; at Blantyre, a seasonal pop-up brings the flavors of the original award-winning Café Boulud on New York’s Upper East Side to the Berkshires; and in Egremont, The Barn continues to do a swift dinner and brunch service–for take-out or eat-in at outdoor tables on their sprawling grounds–and live music is scheduled to return during Phase 3 of the State’s reopening plan. “It’s a beautiful country vibe outside, all properly distanced, and people are going crazy for our new frozen cocktails,” said Jenny Rubin who notes the addition of a fire pit and a small herd of goats and pigs as attracting families with young kids. Still, the weather presents a huge constraint, and it’s simply difficult to operate on unpredictability. “By default, [owning a restaurant] is a seasonal business in the Berkshires,” said Irwin adding, “the rain days, and the slow days, really add up.” Citing a recent New York Times article by Prune chef/owner Gabrielle Hamilton, Irwin pointed to slim profit margins in the first place, regardless of what type of joint one is running. The short story? “Everyone needs to make summer numbers … to have enough in the bank to get through next winter,” Irwin said. And that’s just to survive.

“Everybody’s saying that restaurants won’t make it back, that we won’t survive. I imagine this is at least partly true: Not all of us will make it, and not all of us will perish,” Hamilton said in her April column adding, “few of us will come back as we were.” In the Berkshires, this change is already in process. The Prairie Whale, determined to “turn this time of upheaval into a catalyst for positive change,” has added a 3% kitchen service fee intended to offset the pay disparity between front-of-house (tipped) and back-of-house (untipped) workers. At Race Brook Lodge, the economic repercussions of this global crisis have prompted the team to adopt a “hospitality-included model” championed by New York City restaurateur Danny Meyer, which means Stagecoach Tavern staff will no longer be dependent on arbitrary tips from customers. “We feel that this is a great time to … create a more sustainable and equitable environment for our staff and customers alike,” said general manager Casey Rothstein-Fitzpatrick in a recent press release.

Despite there being a very short window in which to make changes between now and the end of summer, restaurant owners are eager. Irwin ultimately lands on a rhetorical question: “I’m curious to know: What [else] can be done to help all these businesses?” Of course, the busier they are, the better. But one good night means nothing in the greater scale of an entire week. Are customers tipping for takeout? Are workers better off collecting unemployment than risking the volatility of going back to work? At the end of the day, all one can do is pay it forward: to the farmer, to the server, to your neighbor. Or, as Irwin put it, “Now more than ever I’m feeling that I have to be generous” and open to feedback; which is, perhaps, the only way to proceed.