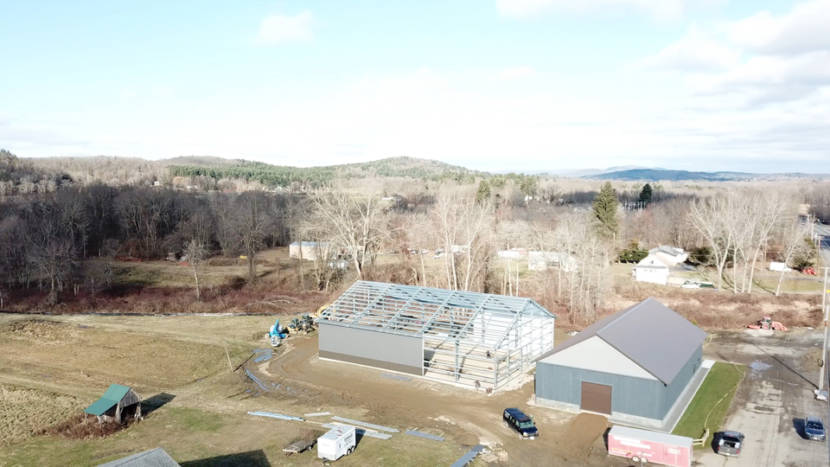 An aerial view of the property that will house The Pass, a recreational marijuana retailer and manufacturer at 1375 Main St. in Sheffield. Photo courtesy Berkshire Welco

Two of those companies are located in South County. Theory Wellness, which opened its doors last year as Berkshire County’s first medical pot dispensary, received its final license to sell so-called adult-use (recreational) cannabis. Click here to read the CCC’s executive summary of the licensing and inspection process that led to the license.

“This is a very exciting day for us,” Theory CEO Brandon Pollock said in an interview. Theory would be the first in southern Berkshire County with a final license.

Pollock said “it would be wonderful” if Theory’s adult-use unit could open before Christmas, but that’s probably not realistic since there are additional steps in the process before the adult-use portion of the dispensary can open its doors.

“At this point, it’s a matter of weeks rather than months,” Pollock explained. “Our team still has a lot of work to do to get this right.”

Among his top priorities is to ensure that Theory’s current medical cannabis patients continue to receive the same high level of service during the transition into recreational sales.

But in a written statement issued later, Pollock said he and his partner Nick Friedman are “excited to begin contributing to this local economy and to bring on more staff to join the Theory team.”

The state will need to do a couple more inspections as Theory moves some of its excess inventory from the medical program to adult-use. In addition, a mechanism will have to be set up to collect sales taxes because medical cannabis is not subject the state sales tax.

Adult-use cannabis is subject to a total of 17 percent in sales and excise taxes and up to a 3 percent local option sales tax, which Great Barrington has embraced. That’s 20 percent total in taxes. So the retail adult-use price will be noticeably higher than Theory’s posted prices for medical. That does not include a so-called community impact fee of an additional 3 percent of quarterly gross sales.

Pollock and Friedman had estimated their recreational operation would bring in between $200,000 and $300,000 in annual revenue to the town, but the pace of sales in the two recreational establishments that opened last month in Leicester and Northampton have caused them to reassess the revenue potential. Sales at those two outlets totaled $2.2 million in the first five days of operation.

“Based on what we’ve seen, [revenue to Great Barrington] could well exceed our estimates,” Pollock said.

Asked if he was concerned about traffic when recreational sales begin, Pollock said Theory has a plan to deal with it. The company has acquired additional parking spaces at its Stockbridge Road store and “perhaps hundreds of others within walking distance.”

Theory also plans to hire multiple police officers to work traffic details in its first week of operation. When Cultivate, the shop in Leicester, opened last month, there were reports of snarled traffic nearby and unruly customers waiting outside in long lines.

Theory markets itself as a “vertically integrated cannabis grow, retail, and product manufacturing company.” It’s headquartered in Stoneham, and also has a medical dispensary retail location in Bridgewater. Theory says all of its products are manufactured in its own state-of-the-art facility and “produced in small batches, which undergo thorough independent lab testing.”

Theory’s Great Barrington adult-use establishment would be the first in southern Berkshire County with its final license. But down Route 7 in Sheffield, Berkshire Welco received its provisional license yesterday by unanimous vote from the CCC, and without conditions, said Michael Cohen, one of the partners.

“It’s a nice validation,” Cohen said in an interview. “We have a long way to go, but this is our first formal recognition from the state.”

That facility is still under construction. Click here to read the executive summary from the CCC on Berkshire Welco’s provisional license. The establishment will be doing business as The Pass and the “applicant states that it can begin operations in May 2019,” the CCC says. Cohen said that sounded like a realistic date.

The building at the front of the 1375 Main St. property is mostly finished and will contain the retail and manufacturing operations. The structure currently under construction at the rear is a “grow building,” Cohen said. There will also be a greenhouse and an outdoor cultivation facility in that portion of the property.

Offices for The Pass will be housed in a building next door that used to be the headquarters for Rock Solid, a tile and stone business that has relocated elsewhere.

Another company, Highminded, has proposed a retail outlet in the so-called flying church. And two brothers from Connecticut have received site plan approval for a retail adult-use store at 82 Railroad St. On Wednesday, crews could be seen hauling equipment out of the building, which used to be a commercial kitchen. There are rumors, as yet unconfirmed, about other cannabis establishments looking to open in town.