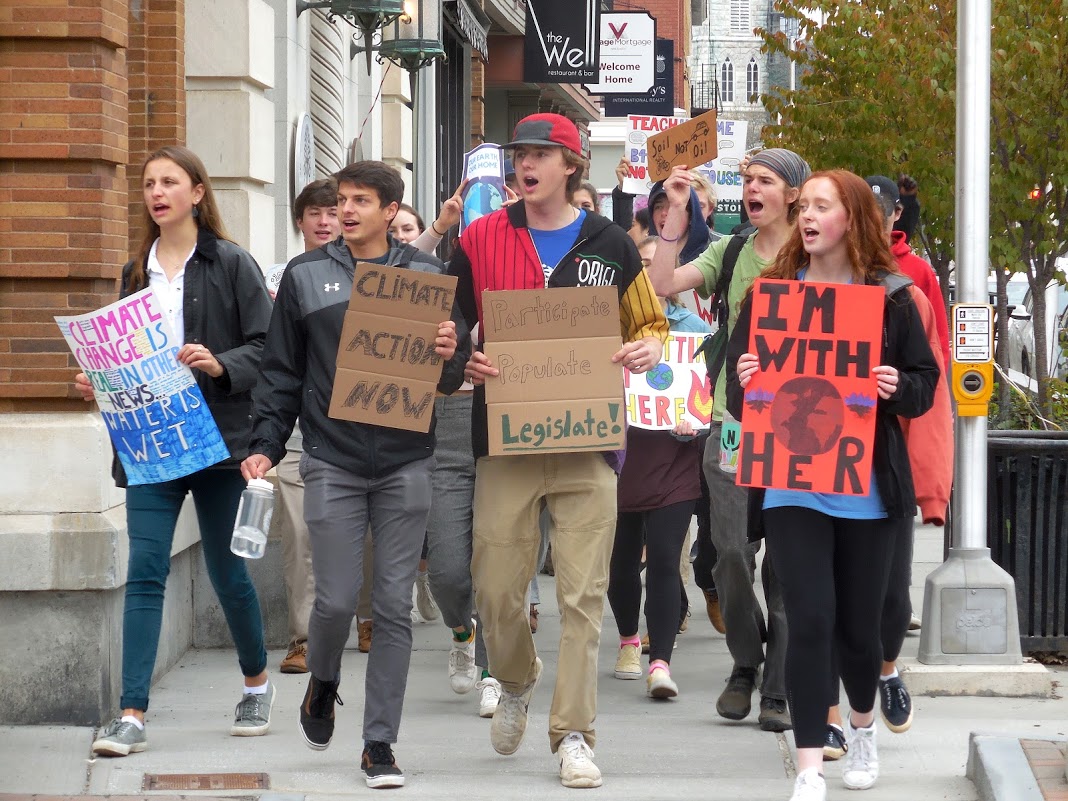 Students from Berkshire School and other area schools marched, as part of the national Youth Climate Strike, to Great Barrington Town Hall Friday to protest the lack of action against climate change. Photo: Terry Cowgill

Great Barrington — The chants could be heard up and down Main Street. And the enthusiasm was infectious.

A crowd of high school students turned out in downtown Great Barrington Friday morning to participate in the nationwide Youth Climate Strike. Most were from Berkshire School in Sheffield, with a smattering from Monument Mountain Regional High School and Bard College at Simon’s Rock.

They met at Railroad Street Youth Project down on Bridge Street and marched from River Street to Church Street to Main Street, finally landing at Town Hall, where they registered their disapproval of the current state of climate change policy.

One of the organizers was Devon Thompson, a Berkshire School senior from Wilton, Connecticut, and a prefect, or student leader, at the school. Another was Peter Dunbar, a senior from Newport, Rhode Island, and head prefect at Berkshire.

“Peter and I are leaders of the environmental action club and my whole family has been passionate about climate change as long as I can possibly remember,” Thompson said in a brief interview.

Thompson added that she’s frustrated by the lack of action on climate change by leaders in Washington. For the last couple of summers, she and her family have visited glaciers and watched them recede. She described the experience as “devastating” and is convinced that her generation will inherit a disaster made worse by a lack of action and will.

“It is so unfair that it’s going to be us who will have to pick up the pieces,” Thompson said. “We will have nothing. I potentially won’t be able to have kids who can live in a clean and healthy Earth, which is crazy.”

Thompson said she will continue her interest in fighting climate change by studying environmental science this fall at Cornell University in Ithaca, New York.

For his part, Dunbar echoed Thompson’s frustration at the lack of action against climate change by elected leaders, especially in Washington.

See video of an Edge interview with Peter Dunbar by Terry Cowgill. Dunbar is a senior at Berkshire School participating in the Youth Climate Strike:

“I just don’t think that enough legislation is being passed,” Dunbar said as he took a break from leading environmental chants. “I think that is an issue that we can clearly see has repercussions that are becoming permanent.”

Dunbar also invoked the theme of environmental justice, a social movement that is centered around the fair distribution of both environmental benefits and burdens.

“I don’t think that is fair that the people who are most affected by this issue are also the people that are … contributing to it the least .. and it is us in the privileged western world that are contributing all this waste.”

Dunbar estimated the number of demonstrators in Great Barrington at between 25 and 30 and called his group “a small partner in a nationwide strike.”

Dunbar will take his interest in the environment this fall to Bates College in Lewiston, Maine, though, at this point, he is unsure whether he will study environmental science specifically:

“I don’t really know what I want to do with my life, but I know I would like to do something involving climate, climate action, maybe environmental policy. But I definitely see myself as continuing to do this.”

The South County strike was but one that included thousands of students in Massachusetts and hundreds of thousands across the country who skipped school in order to participate, according to a news release from the Massachusetts Youth Climate Strike.

The release quoted a recent statement from United Nations General Assembly President María Fernanda Espinosa Garcés of Ecuador that there were “only 11 years left to prevent irreversible damage from climate change.”

Dunbar concurred with Thompson about the generational burden and added that, “If we don’t act now, my generation and many more generations to come are going to be left with some serious problems.”