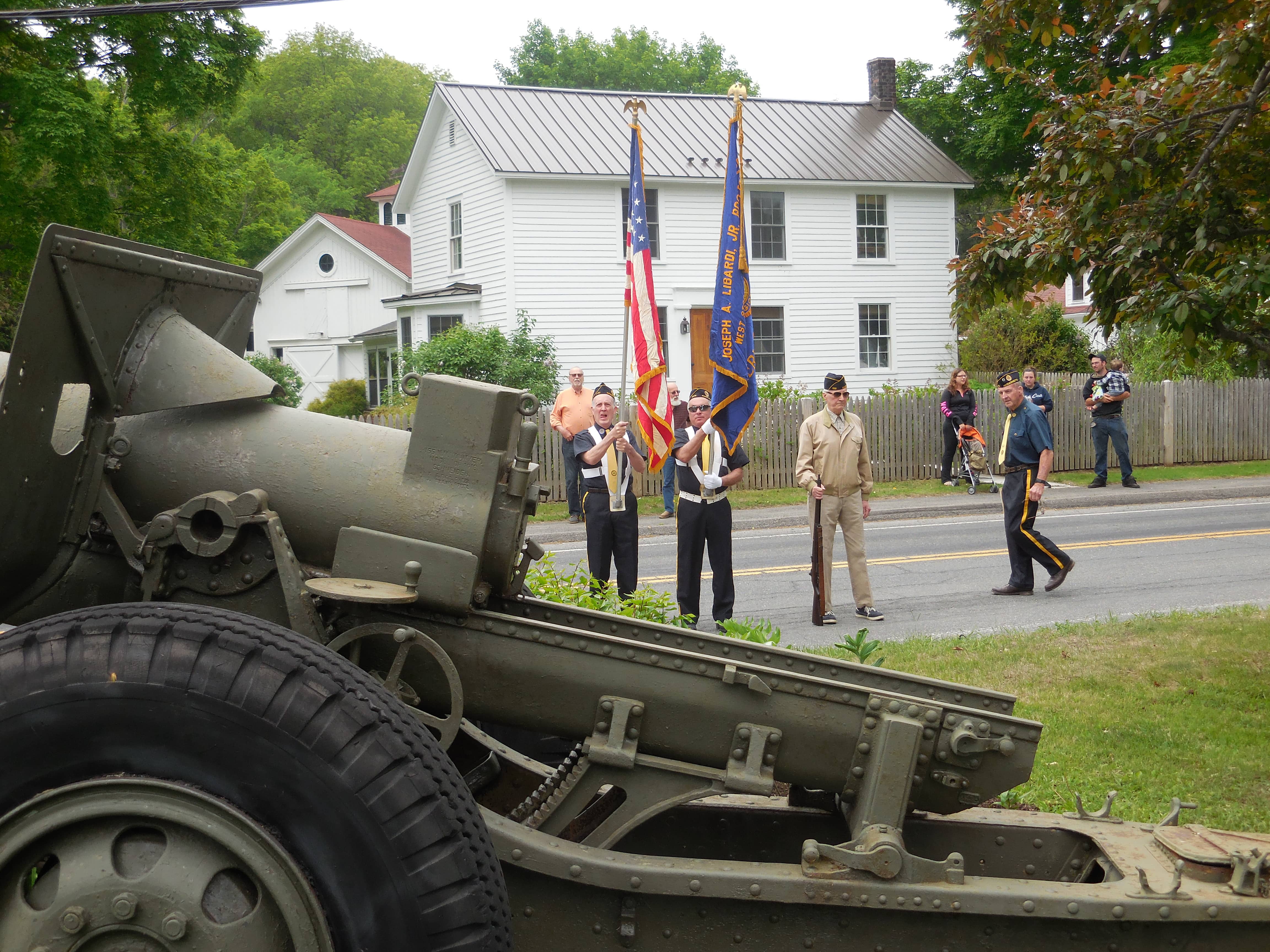 With vintage artillery in the foreground, a veterans' color guard leads the 2015 Memorial Day services at the village green at the intersection of Albany Road and State Line Road in West Stockbridge. Photo: Terry Cowgill

Parade participants will assemble at the South Egremont firehouse for a 12:30 p.m. march. The parade will proceed to the memorial monument in the town square, where there will be concluding services. Snacks and drinks will be served in the firehouse following the ceremony.

Parade participants in Housatonic should assemble at the firehouse for a 9 a.m. start. The parade will march to Saint Bridget’s Cemetery, where there will be a service.

The parade in downtown Great Barrington begins at 11 a.m. Because the Cottage Street bridge is closed, the parade begins this year at the corner of Main Street and Dresser Avenue, and proceeds to Town Hall, where concluding services will be held. Participants are urged to arrive early.

The parade will begin at 10 a.m. at the intersection of High and East Center streets, and proceed down East Center to Fairmount Cemetery for concluding services.

In Lenox Dale, the parade starts at 8 a.m., going from the veterans memorial on Walker Street to St. Vincent de Paul Parish for mass. After mass, the parade will work its way through the village, ending at Veterans Park with a concluding service.

The Monterey Parade is at 1 p.m. Observers gather at the  United Church of Christ or the General Store in the Post Office area. Participants who are marching or on a float gather at the intersection of Sandisfield Road and Main Road., Route 23, at 12:40. for a 1 p.m. march down Sandisfield Road to Main Road and to the firehouse for concluding services and a cookout.

The parade will begin at 9 a.m., starting at New Marlborough Central School in Mill River and traveling down Mill River-Great Barrington Road and ending at the library, where there will be a memorial service. State Rep. William “Smitty” Pignatelli, D-Lenox, is the featured speaker. After the service, the annual five-village kickball tournament will take place at New Marlborough Central School.

The Ashley Falls parade will begin at the village green at 8 a.m. and will end at the cemetery on Clayton Road, where there will be concluding services. Refreshments follow in front of Trinity United Methodist Church social hall.

The Sheffield parade will start at 11 a.m. at Dewey Hall on Main Street and continue on to Barnard Park, where there will be concluding services.

At 11 a.m. cemetery ceremonies will be conducted with a benediction and taps for veterans at both town cemeteries, including a riverside ceremony for those who died at sea. Participants should meet at Proctor Hall, next to the First Congregational Church of Stockbridge, at 10:45 a.m. Transportation to the cemeteries will be available.

At 12:15 p.m. the parade will begin. Participants are asked to meet at the town offices at noon. All veterans, with or without uniforms, are encouraged to march or ride. Veterans needing transportation may call (413) 298-3261.

At 12:45 p.m., the memorial program will commence at the old town hall at the conclusion of the parade. The program will include a guest speaker, student speakers and music by the Berkshire Hillsmen.

There will be a community potluck picnic on the town green following the ceremony. Hot dogs and soda will be provided. Food donations will be gratefully accepted.

Parade marchers will assemble at 9:45 a.m. across from the West Stockbridge Congregational Church on Main Street. Step off will be at 10 a.m. The American Legion will hold services on the bridge at Mill Pond, at the cannon on the corner of Albany Road and State Line Road, and on the lawn in front of town offices at the former Village School on State Line Road. The ceremonies at the town offices will include singing, readings, an invocation and remembrances of veterans lost in the past year.