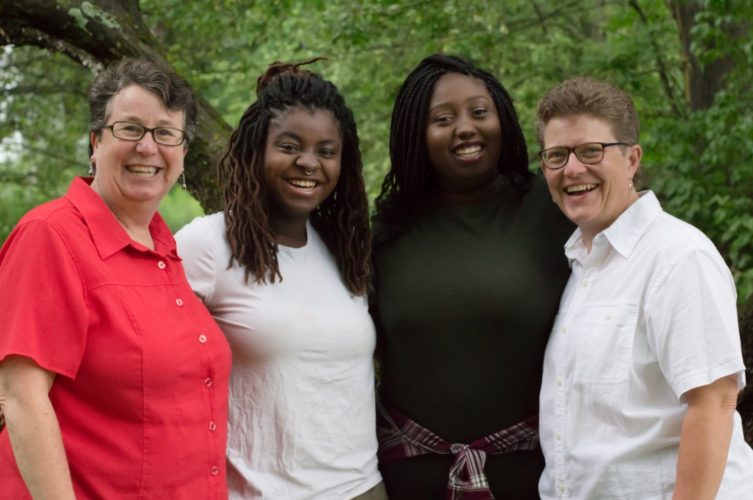 Lisanne Finston, left, and Patty Fox with their children, Maya and Lou Finston-Fox. Sheela Clary would like to like Amy Coney Barrett, but there are some obstacles. Photo courtesy Patty Fox

What a beautiful, lovely family she has. As a mom of three who had once also hoped to adopt, I admire pro-life parents who live their convictions and adopt babies who need loving homes, as two of her children needed when they came into the world. And as the aunt of a delightful 8-year-old boy with Down Syndrome, I already love her son without having met him.

To step my foot into more controversial territory, not only her family appeals. I believe if ACB were speaking in 1987 or 1995 or 2004 or even 2015, she would generally have come across in her opening statement as compelling, sound and thoughtful — also, refreshingly female and young. She looked the picture of dignity, fortitude and forthrightness.

If it had been presented in some past year, Amy Coney Barrett’s relaxed, earnest enumeration of all the important people in her life who helped get her to where she is today would have sounded appropriate to the occasion, and reasonable time taken at the pinnacle of a brilliant woman’s career to express gratitude. I might have looked at her and thought, “Good for you. You’ve come a long way and worked really hard.” I might have even thought, “I’d like to be friends with this woman.”

After all, while I don’t share her Catholic belief system, I am Christian and I do, I imagine, share with her a dependence on faith to navigate this heartbreaking world. Attacking her for her belief system is a nonstarter, and the presence of red-cloaked “The Handmaid’s Tale” characters protesting outside the hearing only strengthens the hand of Republicans and enhances sympathy for her.

All in all, if I’d been introduced to Amy Coney Barrett as recently as the spring of 2016, I believe that, despite the fact that, in my liberal childhood home, the name Scalia was spat with venom by my law-professor father, I would not be able to find much to object to in her.

But as it is, this is October 2020, otherwise known as Hell-in-America. Around 210,000 of us have died. Small businesses are dying off all over the country and will leave emptiness in their wake. Millions of children are, as I write this, sitting in front of devices, alone in their houses or apartments, since that’s what “going to school” looks like for them this fall. Teachers can’t get COVID-19 tests, but athletes and entertainment industry workers and the president — the ones who count — can.

How sweet and quaint and unrecognizable is the world of Amy Coney Barrett! It’s a green, healthy, functional place, inhabited by happy warriors for justice, otherwise known as our elected officials, who enact something called laws! In her rosy view, we still have a government whose purpose is to create these things and not, for instance, to meet the ego-stoking needs of self-interested men!

Get a load of this snippet of fairy tale, from her opening remarks: “The policy decisions and value judgments of government must be made by the political branches, elected by, and accountable to, the people.”

She thinks they are accountable to us! Isn’t that hilarious? The legislative branch, Congress, you are referring to? They can’t even figure out how to intervene to stem the damage wrought by a global pandemic. The only “work” they accomplish is fundraising for themselves and complaining about each other on TV.

Was it the executive branch she was referring to, perhaps?

That part actually is hilarious, especially if you enjoy Donald Trump hair memes, as I do. You’re welcome.

But seriously, I mean. Do I really need to go there? Our presidents? Elected by us? Accountable to us?

Please. Twenty years ago, we elected Al Gore, but the Supreme Court gave George W. Bush the presidency. Four years ago, we voted for Hillary Clinton, but Donald Trump had the Electoral College so he didn’t need to worry about us. And the rest, as they say, is the nightmare we all live with. The Electoral College served us up a serial liar, sex offender, tax-evader, bully and insulter of military heroes who shows zero regard for any human life other than his own.

Yet the man I just described was the very first person Amy Coney Barrett chose to thank in her opening remarks. How can I listen with a straight face to anything further she has to say? She has to be aware, from even the most cursory glance at a TV or newspaper now and again, that no one walks away from an association with DT unscathed. He is like human tar. For God’s sake, her own coming-out party in the Rose Garden was a super-spreader event for COVID-19. Eleven people who attended have contracted the virus. Doesn’t that give her a moment of pause, perhaps a fleeting thought along the lines of, “Wow, that was not an auspicious start”?

But, OK, so she thanked the president. She has to. I get it.

Those words, and the fine antiquated words about value judgements and policy decisions, were far from the most troubling in her speech. This following paragraph is the one that sent chills up my back:

“When I write an opinion resolving a case, I read every word from the perspective of the losing party. I ask myself how would I view the decision if one of my children was the party I was ruling against: Even though I would not like the result, would I understand that the decision was fairly-reasoned and grounded in law.”

Fairly reasoned and grounded in law, but, not to be inhumane about it, sparing a moment to think about the poor schmucks whose lives will be ruined by her decisions. By that measure, circa 1864, couldn’t slave-owners have reasoned fairly and legally for the continuation of their industry?

Addressing a civil rights issue closer to the present day was Mayor Pete Buttigieg, who had a brilliant, spontaneous reaction to that comment, first reminding us that two justices, Thomas and Alito, recently hinted that marriage equality for homosexual couples just might be back on the table soon.

“If she really wants to understand the parties she might rule against … I would invite her to put herself in the shoes somebody who was married, and then was forcibly divorced by judicial fiat.”

If she, sometime down the road, were to cast the deciding vote to strike down marriage equality, I wonder how long she’ll take before her vote to think about the thousands of beautiful, loving families, so many of which contain adopted children who needed loving homes when they came into the world, she’ll be tearing apart.

A family like the one created by Lisanne Finston and Patty Fox of Monterey, who have two adopted African American children. Lisanne is the executive director of Gould Farm and Patty is the pastor of the Congregational Church of West Stockbridge.

“Our family was created not through the legislature and laws of the land, but through the power of the court to interpret what was just and fair. We were one of the first families in New Jersey to adopt jointly through a private agency after the court ruling a year and half earlier regarding kids in the state foster system. So the impact and importance of the court in upholding justice and furthering dignity and welfare for all cannot be understated!”

If only because I’m so very tired of rancor and bitterness, I’d like to find common cause with Amy Coney Barrett. But when I think about the losers in the cases she’s likely to decide, some of whom are among the most authentically Christian people I know, I can’t.