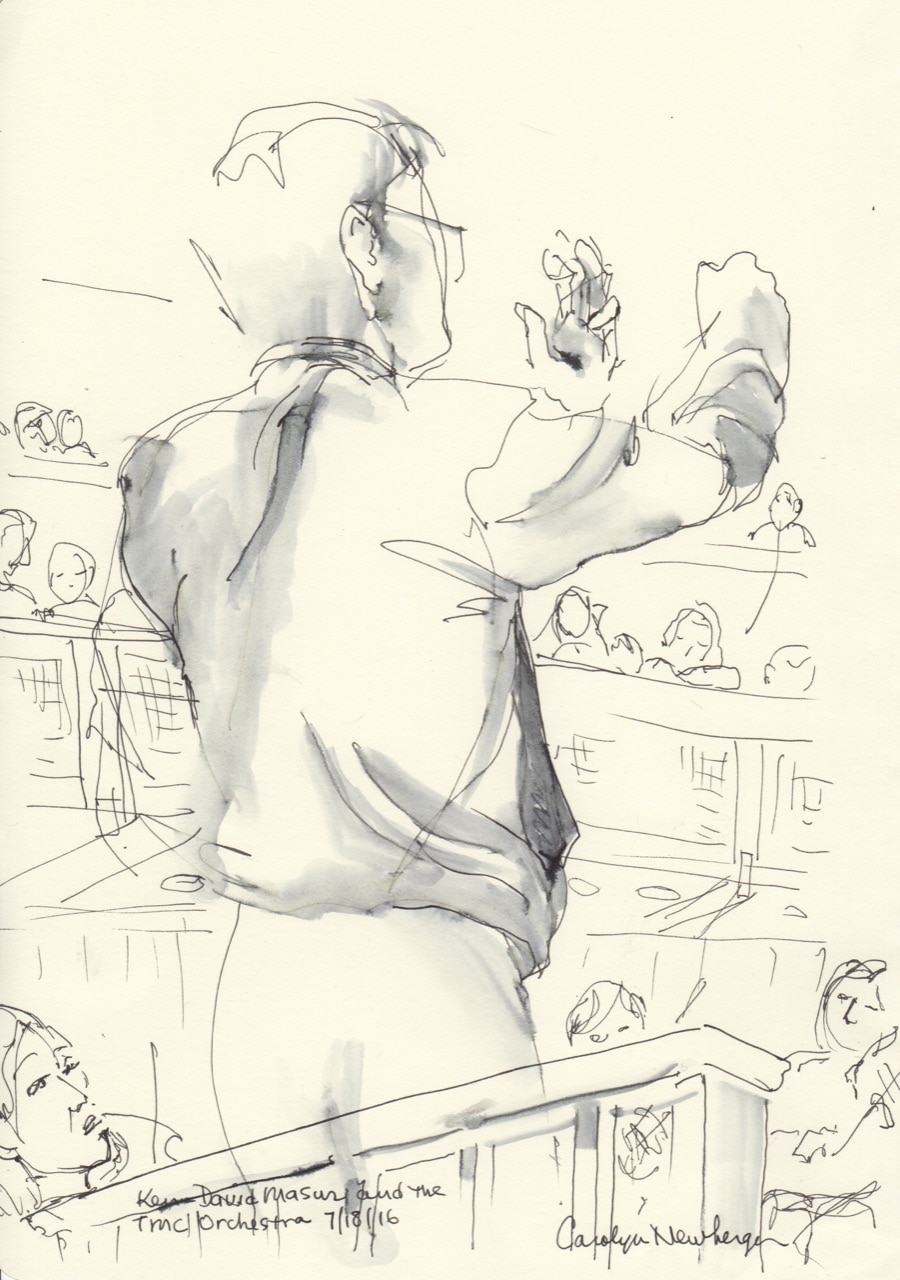 “Now is the time to make real the promises. Now is the time to open the doors.” –From Rev. Martin Luther King Jr.’s 1963 “I have a dream” speech at the Lincoln Memorial, paraphrased by Michael Gandolfi for his Tanglewood commission, “In America: TLI”

Entering this hall for its opening concert on June 28, we were struck by its unusual staging and reminded of another. Immediately it was clear that we were walking through the flat performance area at ground level, looking out on the woods, and toward our right, a striking, raked seating area extending far upward, sitting in the middle of a large rectangular box with a sloped ceiling. It bore an uncanny resemblance to one of the most unusual and renowned English concert halls, refashioned after a large, repurposed barn for storing hops.

The centerpiece of Benjamin Britten’s home and the Aldeburgh Festival, Snape Maltings is located in a village on the Suffolk coast, surrounded by stunning marshlands, accessible to concertgoers on plain wooden walkways. There as well, the focus is on classical music, although one of us (Eli) performed there with his jazz sextet on one of its “Prom” nights and experienced its remarkable setting and resonance first-hand.

There was another, immediate and tragic connection to the Aldeburgh Festival at the very beginning of this celebration: Had composer and conductor Oliver Knussen not died in Suffolk last year at the age of 66, he would have presided over this year’s Tanglewood Festival of Contemporary Music. At Aldeburgh, he conducted the premieres of many of Britten’s works and others.

Here, after studying with Gunther Schuller, Oliver Knussen served as head of contemporary music at the Tanglewood Music Center from 1986 to 1993. His aesthetic vision and astute pedagogy could not but have affected the two composers whose commissioned pieces were offered in this inspiring concert.

It seemed fitting as well that the first sounds to put the new hall to test were Knussen’s stunning “Prequel to Opening Signal,” presented by a distinguished trio of Tanglewood trumpeters: Hakan Hardenberger; David Krauss; and Boston Symphony’s principal, Thomas Rolfs.

This ornamental fanfare began with a piercing, high, forte triad that jumped out at the audience, propelled by the glass wall behind the players. Its stunning, jazzy, intertwining lines, simultaneous trills and dramatic dynamics displayed the new hall as a magic box of sounds, with a totally different feeling from the genteel quiet of the Shed and the echo-y warmth of Ozawa Hall.

This magic box opened further to reveal a deeply affecting sequence of virtuoso performances, short speeches, a televised cameo videotaped for the occasion by BSO conductor Andris Nelsons, a set of Shakespeare readings by the inimitable John Douglas Thompson, and a subtly riotous half-improvised flamenco sequence that brought down the house.

Among the solemn contributions, the most vivid were Augusta Read Thomas’s composition and remarks. Her “Magic Box” saw its brilliant world premiere this evening.

“Magic Box” was conducted with deep attention to its exquisite detail by Ken-David Masur. The piece sizzled, rattled and swung to the sounds of an uncountable number of percussion instruments performed with aplomb and delight by percussionists Daniel Bauch, Kyle Brightwell, Matthew McKay and George Nickson, who speed-walked from one set-up to another, joined by the New Fromm Players: Xiofan Liu and Chi Li, violins; Sam Pederson, viola; and Sonia Mantell, cello.

A panoply of bashes, scrapes, shakes and clatters from tom toms, tire rims, triangles, and tambourines gave way to softer, nuanced explorations of the textures of marimbas, vibraphone and strings. In a slow, reflective passage that brewed high violin harmonics with silences, the piece displayed the resonance of the surrounding wooden walls. This was magic of another sort! The final cadence framed a series of vivid, stark, polytonal arpeggios with two sustained electronic reverberations that recapitulated the opening sizzles. We received this “Magic Box” within a magic box within a magic box.

A welcome and equally satisfying sonic contrast followed. BSO principal clarinet William Hudgins played the leading role in the second movement “Adagio” of Brahms’ String Quintet in B Minor for clarinet and strings, Opus 115, performed with glowing sensitivity to phrase and structure by violin masters Sheila Fiekowsky and Si-Jing Huang, viola Daniel Getz, and cello Alexandre Lecarme. Hudgins led the band using his clarinet as a baton, nodding his head to cue phrasing and sustaining eye contact to cohere the ensemble.

A long, winsome ensemble decrescendo preceded a muted violin solo with a descending, repeated three-note phrase that formed a muted Brahms lullaby with a tender repetition of the row.

In the end, we were given a marvel of both composition and acoustics. Fiekowsky’s low register resonated like a viola through the hall—and Getz’s low register like a cello’s—as Hudgins ascended a melodic line over a magnificent C major, G major, E major cadence. Spell it out at the piano, if you will, and you’ll get the flavor. This was romantic perfection, summoning in texture and harmony the evening’s optimism for the future, grounded in the passions of the past.

Past and future was also summoned eloquently in remarks by composer and conductor John Williams. In a philosophical, searching reflection on where he stands in his aging life in relation to his beloved Tanglewood, the composer of “Star Wars” addressed the triviality of the movie industry’s compressing the future into innovations in warfare, all the while ignoring the vast cosmos in which our brief lives go forth. “We stand in a narrow space between the past and the unknowable future, before leaving our present and falling into the trash heap,” he said. With regard to that present, Williams offered an aspiration within a conundrum: “Tanglewood Learning Institute is not Tanglewood Music Center or Tanglewood Music Institute. It’s broader than that. It’s here to make the world a better and more equitable place.”

Much of this daring adventure was unfortunately obscured by the limited projection of the solo voices. As in the Shed and in Ozawa Hall, judicious use of microphones is needed. Nonetheless, Gandolfi’s judicious choice of quotations and imaginative tonal settings were marvelously apposite to the lofty values and aspiration of the TLI.

Then came an initially confusing, astounding confection. At a high, small, circular bar table, a sleek young gentleman opened and sniffed a cigar and poured himself a glass of red wine. As he sipped, a portly man of a certain age joined him and poured himself a glass. They winked at one another as a slight, elegantly dressed woman walked into the room and joined them at the table. To recorded music in waltz time, the portly gentleman arose, fastened castanets to his hands and began circling the sinewy young dancer with steamy, sexy, flamenco moves. Go Mark Morris! What ensued was the essence of Spanish sultriness, interrupted by tipples of wine at the bar table, while the audience cheered and laughed and the nubile and mustachioed young man looked on with a sly smile.

The renowned Shakespearean, John Douglas Thompson, presented a deep, emotional and provocative suite of short quotations from the Persian poet Rumi (“Music is the meat of all who love, music uplifts the soul to realms above”), from the most musical of Shakespeare plays, “The Tempest,” and the American poets Elizabeth Bishop and Billy Collins.

He read Collins’ poem “The Music of The Spheres”:

reminded me of the music of the spheres,
that chord of seven notes,
one for each of the visible planets,

which has been sounding
since the beginning of the universe,
and which we can never hear,

according to Pythagoras
because we hear it all the time
so it sounds the same as silence.

then people would stop
on the street and look up,
and others would stop in the fields

for the first time,
and that husband would lower
the newspaper from his face

look at his wife
who has been standing in the doorway
and ask Did you just say something, dear?

He closed with the ethereal Elizabeth Bishop sonnet:

I am in need of music that would flow
Over my fretful, feeling finger-tips,
Over my bitter-tainted, trembling lips,
With melody, deep, clear, and liquid-slow.
Oh, for the healing swaying, old and low,
Of some song sung to rest the tired dead,
A song to fall like water on my head,
And over quivering limbs, dream flushed to glow!

There is a magic made by melody:
A spell of rest, and quiet breath, and cool
Heart, that sinks through fading colors deep
To the subaqueous stillness of the sea,
And floats forever in a moon-green pool,
Held in the arms of rhythm and of sleep.

Aaron Copland’s “Danzon Cubano,” performed on two concert grands by Mathilde Handelsman and Nicolas Namoradze, rocked the house with toe-tapping syncopations and metrical tricks that fooled the feet, with unexpected time changes and cross-measure accents. Copland would have hoped, one might dare to suggest, that jazz will also continue to live on at Tanglewood.

To close the concert, James Burton conducted a crowd of Tanglewood Festival Chorus members singing the traditional Tanglewood anthem “Alleluia” by Randall Thompson, which appeared in its instrumental setting in these days of celebration and, as always, at the annual convocation of the Tanglewood Music Center.

It was commissioned in 1940 by Serge Koussevitzky, who sought a vocal fanfare for the opening of the predecessor organization to Tanglewood, the Berkshire Music Center. Thompson, however, was reluctant to compose a celebratory work because he was preoccupied by the tragedies of the war in Europe. So he delivered this piece, about which he wrote subsequently:

“The word ‘Alleluia’ has so many possible interpretations. The music in my particular ‘Alleluia’ cannot be made to sound joyous. It is a slow, sad piece, and…here it is comparable to the Book of Job, where it is written, ‘The Lord gave and the Lord has taken away. Blessed be the name of the Lord.’

Assuredly, this Learning Institute will contribute to the realization of our highest principles and yearnings. This concert gave voice to many sources of artistic inspiration and the urgent need to inform and sustain a humane artistic presence in the Berkshires, Massachusetts, America and the world.