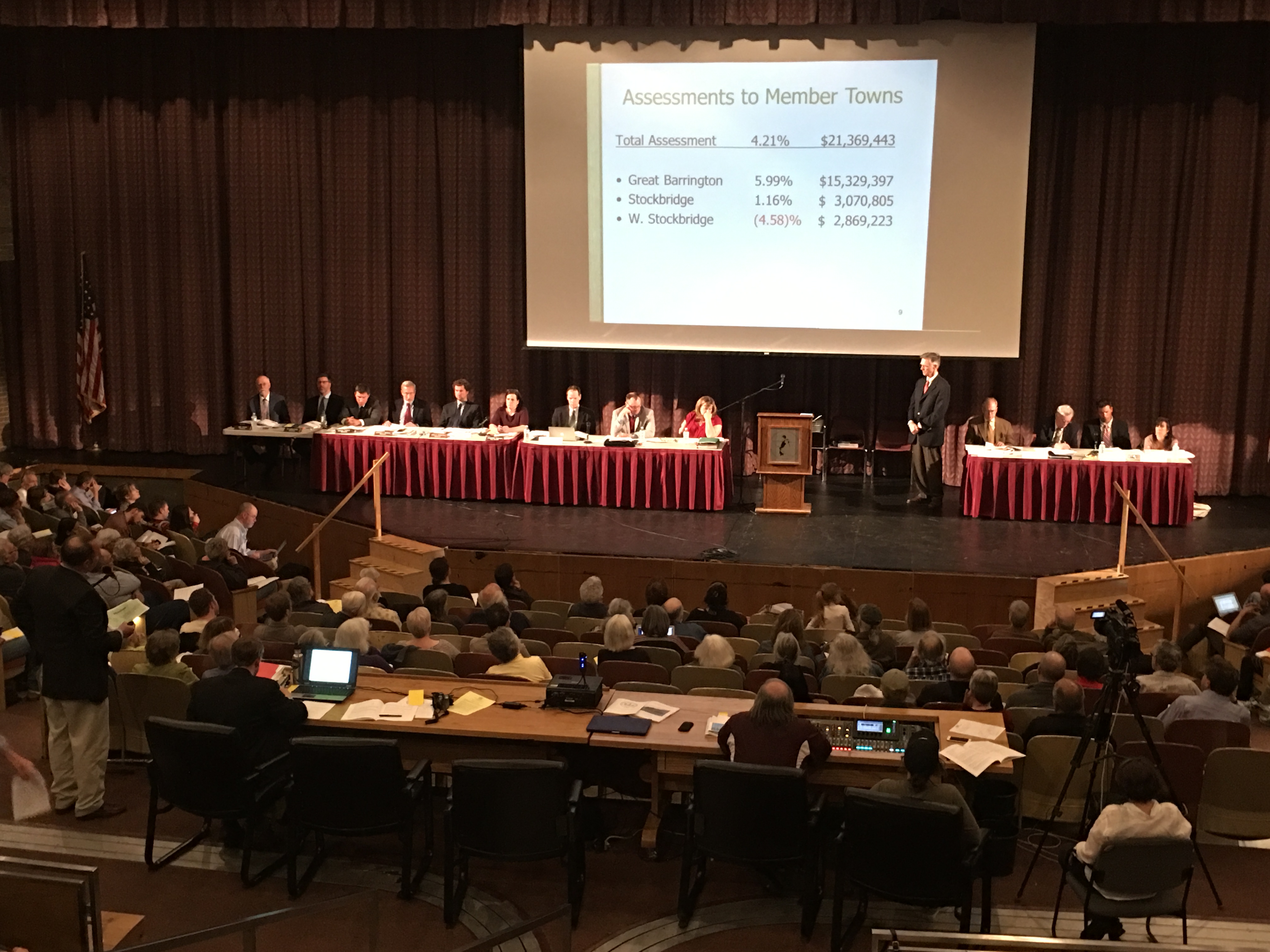 Great Barrington — Not without considerable debate, the town finally has a comprehensive set of regulations to deal with the burgeoning business of solar energy and its associated installations, panels, arrays and pole mounts.

That was one major outcome of Monday’s annual town meeting in the Monument Mountain Regional High School auditorium. In the last few years, Great Barrington has seen several major solar installations — some constructed by commercial energy producers and others by local businesses, such as Guido’s Fresh Marketplace and the Barrington Brewery, to supply their own power.

Three amendments were offered to the proposed bylaw. Two of them passed but not before two members of the Planning Board, which had prepared and approved the bylaw, accused some supporters of one of the proposed amendments of trying to unduly frighten voters.

“This is a scare tactic,” said Planning Board member Jonathan Hankin, referring to a proposed amendment from Planning Board candidate Holly Hamer that he said, if passed, would be “effectively be taking away people’s property rights.”

Hamer’s amendment would have restricted solar developments on agricultural lands to five acres, down from the 15 allowed in the bylaw endorsed by the Planning Board. Her amendment would have further prohibited commercial arrays of any size in non-farmland residential zones R-2 and R-4, whereas the bylaw required only a special permit.

Hamer emphasized that she is not “anti-solar” and praised the other bylaws and their “regulations, guidelines and recommendations which will benefit our citizens.” However, Hamer is convinced that 15 acres, which she characterized as the equivalent of a “large commercial business,” is simply too large.

“Nobody signed up for a mortgage thinking they wouldn’t be able to prohibit a developer from building a large commercial business next door,” Hamer said in a statement sent out before the meeting. “Or across the street … To me, this is a no-brainer.”

“Our new zoning proposal strikes a balance between allowing green energy in our community and protecting the scenic beauty of the community,” countered Brandee Nelson, who chairs the Planning Board. “This amendment by Ms. Hamer has not had an opportunity to be appropriately evaluated on its merits and I cannot support it.”

Planning Board member Malcolm Fick noted that the town’s own stated goals specifically encourage “our farmers to keep in business by allowing accessory businesses, including alternative energy.”

“This is actually in accordance with the master plan,” Fick said. “I also object to the use of scare tactics.”

But Hamer did have a couple of supporters in the audience. Michael Cohen said the Berkshires derive much of their attractiveness “from farmland,” but that large-scale solar installations effectively convert “farmland to industrial power plants.”

“Have you seen Route 183?” landscape architect Craig Okerstrom-Lang asked rhetorically, referring to sites in Housatonic with at least three large solar developments on properties that had been industrial landfills.

After further discussion, Hamer’s amendment failed, but the two others did pass. Barbara Syer proposed that ground-mounted solar installations be allowed in the Taconic/West Avenue Historic District by special permit only, while Sharon Gregory wanted to increase setbacks for solar installations in certain zones.

The proposed regulations would clarify much of what has become common practice, allowing ground mounted installations by-right in some zones and by special permit in others. Roof-mounted systems would be allowed by-right virtually everywhere in the town.

The town’s operating budget, at a little more than $11.1 million, a 1.99-percent increase over last year, passed with only a few questions from the audience. Same for the capital budget, which anticipates spending almost $4.2 million on capital projects, of which $1,176,400 is expected in grants, state funds and CPA. The remaining $3,010,000 will be funded in bonds.

Perhaps the surprise of the night was how easily the town’s share of the Berkshire Hills Regional School District passed. Last year, the budget was defeated in Great Barrington but passed in the other two member towns, Stockbridge and West Stockbridge. Great Barrington eventually passed it on a second try.

The town’s share of the Berkshire Hills budget is more than $15.3 million, for an increase of 6 percent in the assessment over last year. District officials say the increase is largely attributable to an increase in enrollment from Great Barrington this year.

Superintendent Peter Dillon sang the district’s praises, noting that this year three seniors were accepted to the Massachusetts Institute of Technology.

“One was an exchange student, so we can’t totally take credit for him but we’re still psyched,” Dillon said.

About 75 students are doing internships at local organizations. And the district has nominated three teachers for a countywide teacher-of-the-year award. The district has made great strides in sharing services with other districts, he said.

Dillon has also been hired to be the part-time superintendent for the Shaker Mountain School Union and the Regional Agreement Amendment Committee successfully completed  a proposal to change the way towns are taxed to pay for capital spending in the district. That proposal has been approved by voters in Great Barrington and West Stockbridge. Stockbridge voters will weigh in on the proposal at their annual town meeting on May 15.

That could be one reason why another proposal from Sharon Gregory failed. Her article called for the creation of “a formal delegation of school committee members, town officials and citizens to open discussion with other school districts and towns to create an expanded regional high school.”

While there were some who may have agreed with the proposal, the item was brought up at almost 10 p.m. at the end of an exhausting four-hour meeting and it failed to gain traction.

But that was the only article that went down in flames. Among the others that became law were: