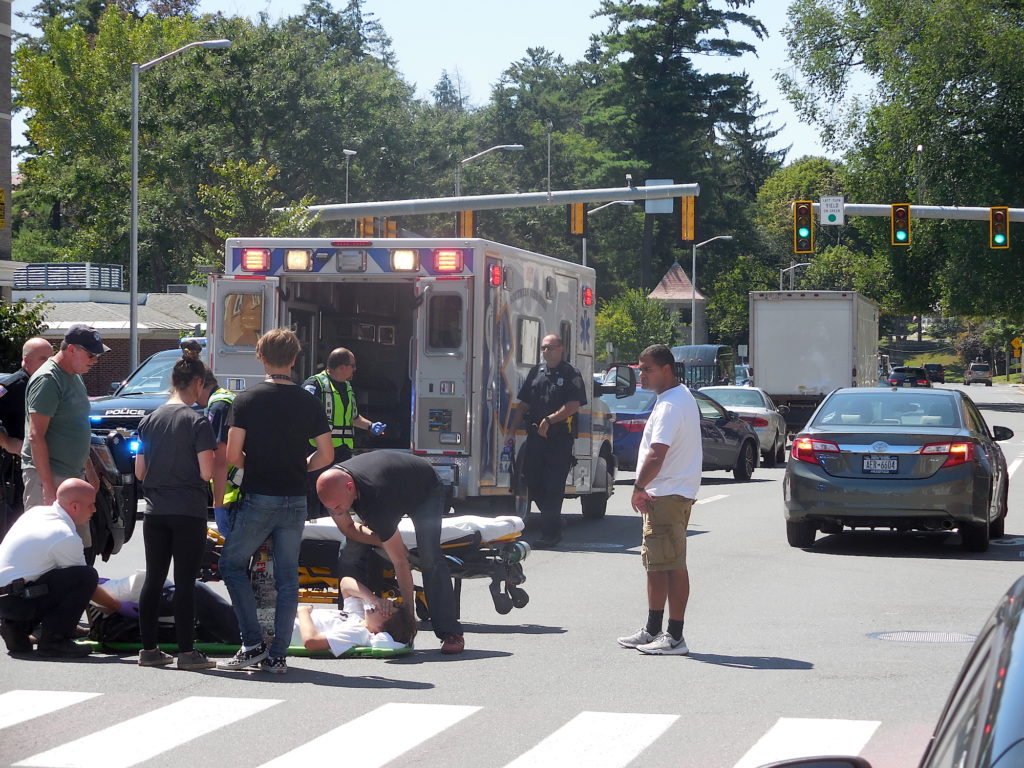 Terry Cowgill
Police, firefighters and EMTs administer first aid to a teen skateboarder who was struck by a motorist around noon on Tuesday, August 20.

Great Barrington — A teenage skateboarder was struck in a downtown Great Barrington crosswalk at about noon today. The victim appeared to suffer non-life-threatening injuries and was transported to Fairview Hospital by EMTs from the Southern Berkshire Volunteer Ambulance Squad.

Witnesses told The Edge the teen was with a friend and hopped on his skateboard at the east end of the downtown crosswalk in front of the Fuel coffee shop. Ben Correia, who works at Wheeler & Taylor, witnessed the incident.

Correia said some cars had stopped on the east side of the street to allow the boy to cross but when as he proceeded to the west side a woman driving a Toyota sedan did not see him and struck him. Correia said he had he had been told the teen has dislocated his ankle. 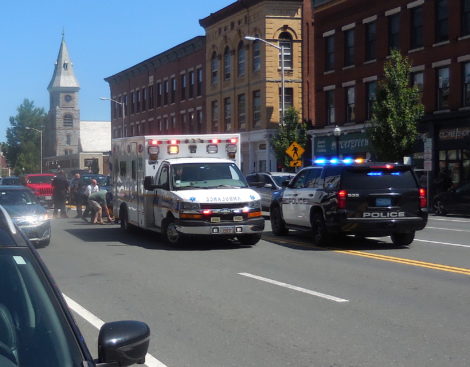 Emergency responders place the victim in an ambulance.

Fire Chief Charles Burger was at the scene and referred questions to the Great Barrington Police Department. A spokesperson at the department could not be reached in time for publication.

West Stockbridge select board member and firefighter Eric Shimelonis was in his Jeep just as the incident was unfolding. The motorist who struck the teen was in a Toyota sedan with New York plates.

Shimelonis was driving southbound in the left lane. He said the teenager was travelling at a high rate of speed, by skateboarding standards.

“I saw out of the corner of my eye something moving very quickly,” Shimelonis said in an interview. “I locked my brakes. The woman on the right was blocked by my Jeep. She clipped him.”

Shimelonis estimated only a split second elapsed between when he stopped and the skateboarder was struck.

“This fellow was really flying,” Shimelonis added. “I feel bad for the lady in the car next to me.”

It is not entirely clear whether skateboarders are required to dismount and traverse crosswalks on foot. Bicyclers are not considered pedestrians and must obey the rules of the road, which means they cannot be ridden across crosswalks, law enforcement sources say.

In some jurisdictions, such as Springfield, skateboarding is “prohibited upon any roadway, street or sidewalk in any portion of the City specifically designated as a central business district.” 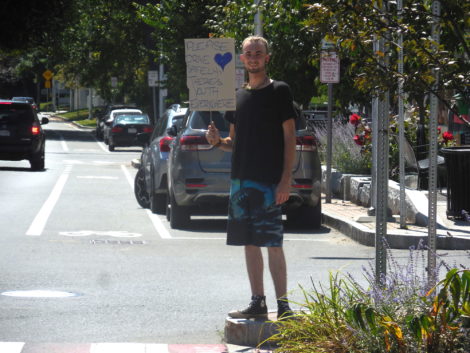 Devon VanDeusen of Great Barrington knew the victim and shared his thoughts with motorists after the incident. Photo: Terry Cowgill

About an hour after the incident, one of the skateboarder’s friends appeared at the corner of Main and Railroad streets where the incident occurred. Devon VanDeusen, 20, works at the at the skatepark at the Railroad Street Youth Project and knew the victim. He was holding a hastily constructed sign that said, “Please drive safely, there’s youth everywhere.“

“I don’t know him too well but he’s a really good kid,” VanDeusen said, referring to the victim, whom he said was 15 and whose name was Gabe. “I don’t like what’s going on around here. People don’t give a shit.”

VanDeusen said he viewed his little demonstration as a form of activism, adding that, “I love doing social experiments like this.” He is concerned about speeding in town and sees vehicles traveling past the RSYP all the time at 40 miles per hour even though the speed limit is 25 on that portion of Bridge Street.

He made the sign from cardboard and taped it to an old arrow that was lying around the RSYP building.

“I’m trying to help out my town, man,” he said, waving to passersby, some of whom were honking in approval. “All the kids around here, they’re all my friends.”

Update: The victim was later identified on social media by his mother, Regina Santamarina, as Gabe Santamarina, 15, a sophomore at Monument Mountain Regional High School.

This story will be updated. A statement from the police is expected soon.