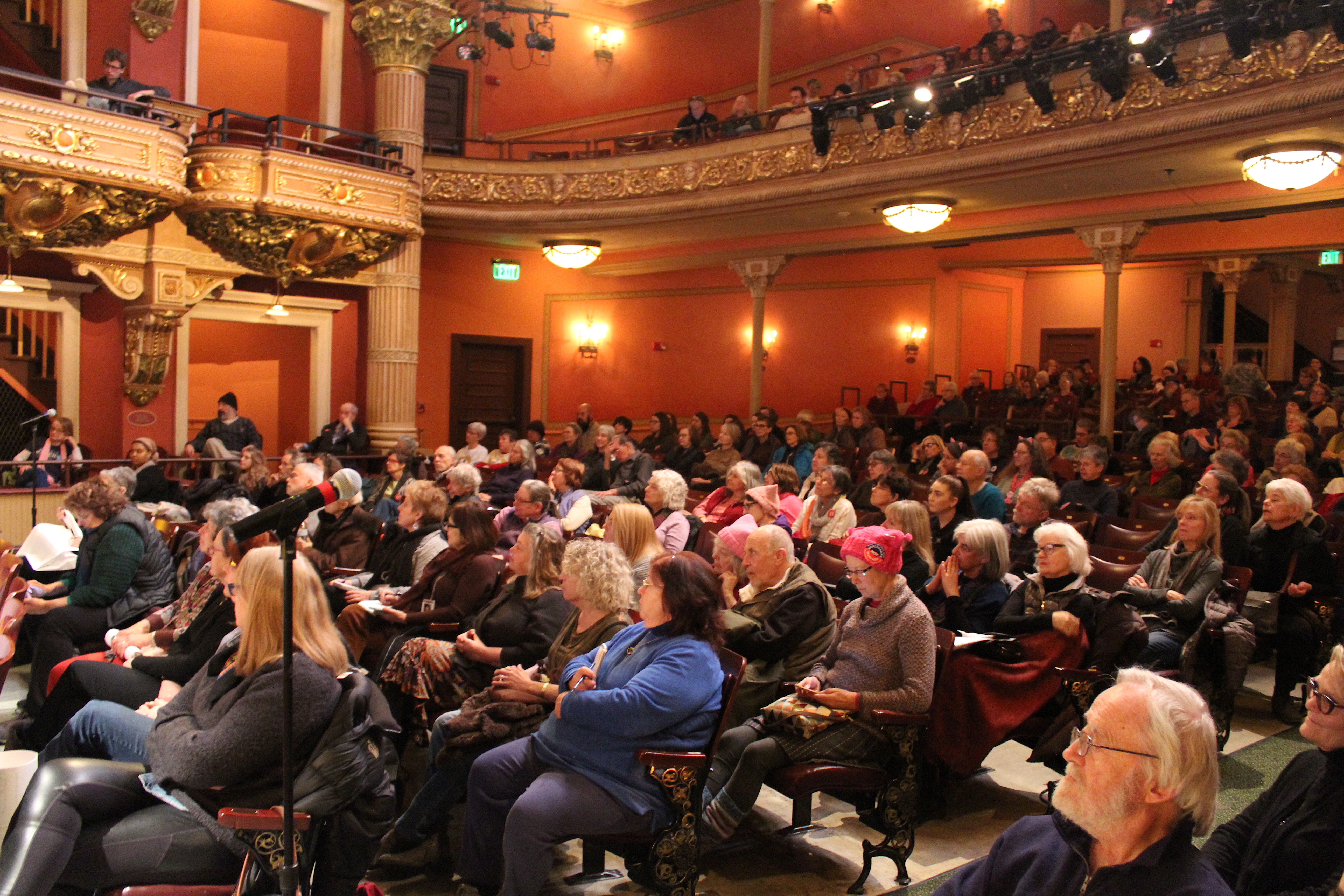 Pittsfield — It may not have been an actual march, but a sister event in the Berkshires to this year’s Women’s March on Washington was as spirited as any parade could hope to be. If anything, the event at the Colonial Theatre yesterday (January 20) was more ideas-driven than most large outdoor demonstrations.

On the one-year anniversary of the iconic Women’s March movement, Indivisible Pittsfield, a Trump resistance group advocating for social justice, organized what it billed as a “March into Action Resource Fair and Community Forum,” with more than 20 groups participating. The Indivisible Pittsfield event joined hundreds of others across the country.

Before the panel discussion in the theater, dozens of progressive and Trump resistance groups set up displays in the theatre’s lobby. There were representatives from the Berkshire Democratic Brigades, Berkshire Interfaith Organizing, Berkshire Immigrant Stories, the Four Freedoms Coalition, Lift Every Vote, Pittsfield Area Council of Congregations, and the United American Muslim Association of the Berkshires. Even in the lobby, the energy was palpable.

It was, after all, one year to the day since Donald Trump was inaugurated in front of what his spokesman said “was the largest audience to witness an inauguration, period.” But like many utterances of Trump and his administration, it turned out to be false. And that — along with the Republicans’ actual policies, which Indivisible organizer Drew Herzig called a “tidal wave of regression” — seemed be a theme of the panel discussion.

Drew Herzig from Indivisible Pittsfield, who hosted the event, asked panelists to comment on two questions: “What are the two most important issues our community is facing in 2018?”; and “How can we build better partnerships to address these issues?”

Jim Mahon, from Berkshire Democratic Brigades, made his priorities clear. “We need to organize and get people mobilized to vote.” And, he continued, “We can’t operate with different versions of the truth…the press needs to let people know that lies are being told.”

Russell Freedman from Progressive Democrats of America introduced the need to focus on income inequality. “500 families in Pittsfield don’t have enough to eat, while the 50 richest people in Massachusetts have a combined wealth of $133 billion. How did America get so off-balance?”

Voicing two main issues that resonated throughout the panel, Shirley Edgerton, a cultural proficiency coach in the Pittsfield Public Schools, spoke of “equity and inclusion,” adding that “often we separate groups. We talk about immigrants but we forget about so many other marginalized groups that exist who continue to have all kinds of gaps in terms of achievement.” She listed those in the criminal justice system, those who are the victims of poverty and the LGBT community as examples.

Toni Buckley from Berkshire Immigrant Stories noted that refugees need to be included.  “I hate the words “refugee crisis,” she said, “because refugees did not cause the crisis.  Refugees are not to blame.  Governments who caused the problems are to blame.”

Michael Wise, who chairs the Great Barrington Democratic Town Committee, noted that his group has been on the forefront of the Trump resistance movement in Berkshire County, as when last March the DTC invited various South County groups involved in the resistance to the Berkshire South Regional Community Center on a Saturday morning.

“We compared our notes and saw how we could work together,” Wise said. “And we had 85 people in the room with different agendas and I think they are working together.”

Wise’s group is working to elect Democrats on all levels and is focusing on economic development, income inequality — “or something as simple as broadband access to the hill towns.” That comment generated scattered applause.

See video below by Terry Cowgill of a portion of the panel discussion:

Ralph Howe, president and pastor at First United Methodist Church in Pittsfield, spoke of “the punishment culture” that dominates the reaction to drug addicts and people with mental health issues. “The punishment culture makes people feel hopeless. We need to focus on what gives people pride, hope and joy. We should stop spending money on punishing people and start investing in their lives.”

Rabeh Elleithy, a member of the United American Muslim Association of the Berkshires, spoke of the value of engagement, “irrespective of our backgrounds or ethnicity or religion.”

Dennis Powell pointed out that important people were missing for the day’s audience. “Where are the lawmakers and the law enforcement people who have created our current situation. We need action, not talk. Action means results.”

“We need to have different leadership,” added Moon, a Fairview Hospital nurse who won election to city council in November. “In local elections, up to the state level and the national level, we need to fill that pipeline with people who want to see change — real change — happen.”

Paul Mark, the state representative, said the issue that drives him the most is fighting poverty and destroying the inequality that creates barriers that keep people in poverty.” He cited as an example of income inequality the fact that Massachusetts has a flat income tax rate of 5.1 percent.

Mark said he favors the Fair Share Amendment, or the so-called millionaire’s tax. The state constitution states specifically that the income tax cannot be graduated — or, in other words, tax higher incomes at higher levels.

Mark noted that lawmakers on Beacon Hill approved the fair Share Amendment last year and that the amendment, which would impose a 4-percent surtax on income in excess of $1 million annually, will be on the ballot in November.

Taxpayer groups have argued that the millionaire’s tax will spark a court challenge and chase high earning individuals‘ and their families out of Massachusetts but Mark is not buying it.

“This will free up resources for the potential of up to $2 billion in money that could come back for our roads for our education, for higher education, for every level,” Mark said to much applause.

Responses to the second question, “How can we build better partnerships to address these issue?”, focused on a few points of agreement. Kristen Van Ginhoven of WAM Theater introduced the idea, which Dennis Powell of the Berkshire NAACP seconded, that “we need to overcome personalities. Personalities are the thing that make it not work.” To which, Powell added, “ We have to get past the personalities. We have to understand that we’re working for something bigger than we are. We need to give up ownership and think about the mission. We all are doing good work. We just need to do it together. “

The need to build meaningful relationships among groups was another major point of agreement, although panelists all acknowledged that the process can be difficult. Jeff Lowenstein from Berkshire Interfaith Organizing talked about the time it takes to get people to trust you. Ralph Howe talked about the need to listen. “In ecumenical dialogue,” he said, “ we don’t just seek common ground. We seek to listen to the depths of one another. When we move past ‘bumper sticker conversations’ we’ll find what we have in common.”

Michael Wise, practically, suggested that you need to figure out who’s the best person at social media in each partner group, and get them on board to help communications.

Geraldine Shen of Greylock Together urged everyone to figure out what you specifically can do, and her associate Ali Benjamin said that the best way to get people to work with you is to know exactly what you want them to do, and ask them directly to do it.

In the last half hour of the event, members of the audience were invited to comment on a third question: “How can community members help with these efforts?” Several people called for a joint online calendar all groups can post their events. Marcie Setlow, publisher of The Berkshire Edge, pointed out the The Edge already offers this service. Everyone is welcome to post events in the We The People category on the Edge calendar. https://theberkshireedge.com/event-categories/?cat_id=MTc%3D

One audience member talked about how much she had been inspired by the “I’m With Her” slogan from the Clinton campaign, as it said to her that women and other minorities were important. Others suggested that, to build a viable coalition, we needed consistent messaging and regular meetings, to which host Drew Herzig replied that he would try to organize more meetings over the course of the coming year. A suggestion was made that Indivisible Pittsfield and the Four Freedoms Coalition should merge. And finally, an audience member suggested that we all make sure there is an adequate transportation network to drive people to the polls in November.

As attendees filed out of the theater, lively conversations continued in the lobby, signs of things to come.