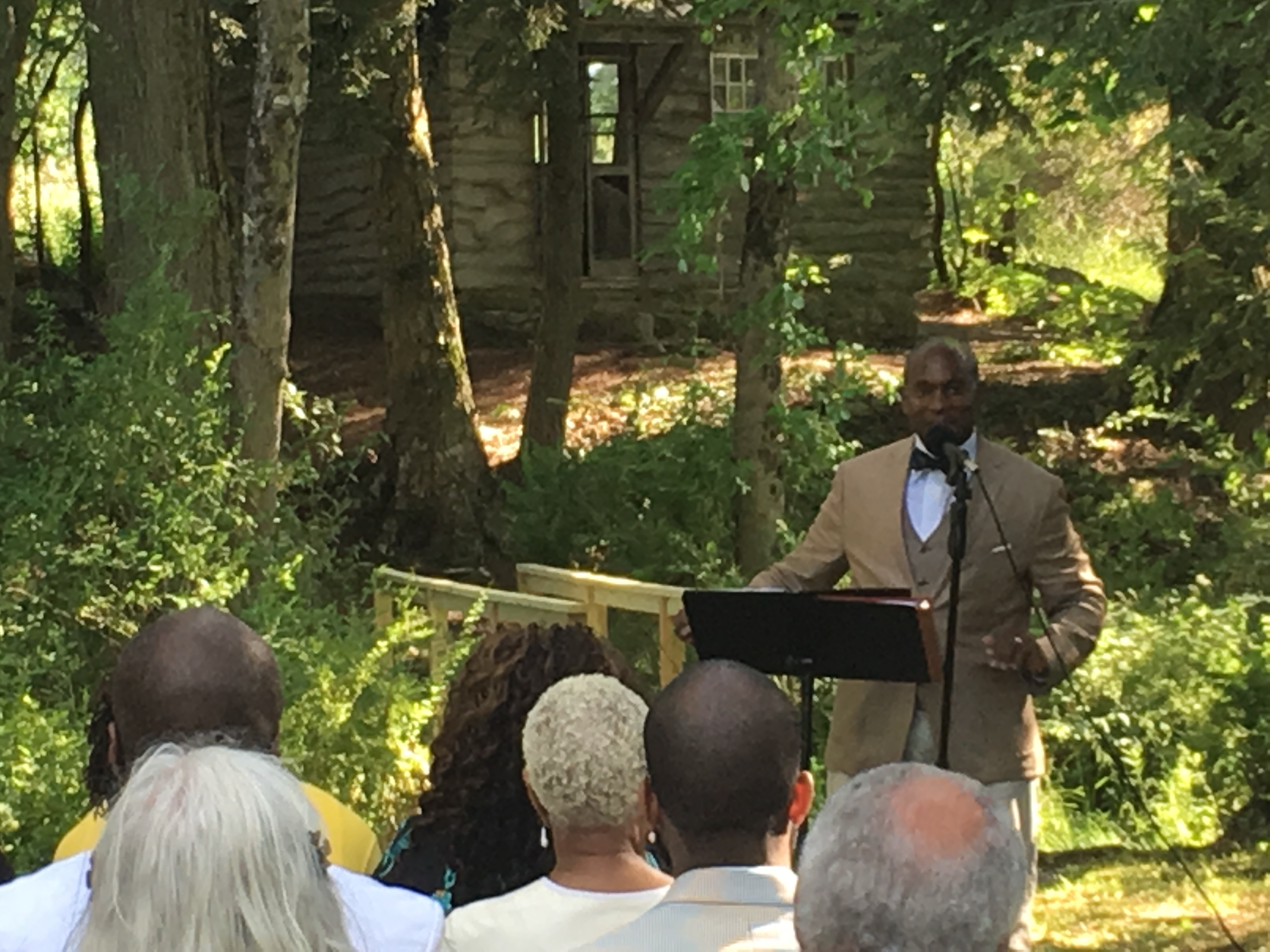 Great Barrington — James Weldon Johnson, a founder and senior member of the Harlem Renaissance and the lyricist for the NAACP anthem Lift Every Voice and Sing, wrote his most popular and famous works, God’s Trombones and his autobiography, Along This Way, from his secluded writing cabin in Great Barrington on a hill overlooking Alford Brook.

On Saturday, June 24, the restoration of Johnson’s cabin and nearby home, and the envisioned reestablishment of his historic place in the cultural life of Great Barrington took some major steps closer to realization. At a gathering held on the Johnson home site on Alford Road, James Weldon Johnson Foundation President Rufus Jones, Johnson’s Literary Executor Jill Rosenberg Jones and Bard College at Simon’s Rock provost Ian Bickford announced to 125 assembled guests their partnership to promote Johnson’s legacy through innovative programming, including artists’ residencies. Silent and live auctions raised more than $27,000 for the restoration of the property.

Next month, the five visual artists who have been awarded the inaugural James Weldon Johnson Artist Residency will visit Great Barrington and draw inspiration from Johnson’s former summer home — Five Acres — as well as the bucolic Berkshire Hills where the noted author, lyricist, poet, diplomat, attorney and leader of the NAACP found his own muse nearly a century ago.

The James Weldon Johnson Foundation is proud to partner with Bard College at Simon’s Rock to launch an artist residency. Johnson once said, “A people may become great through many means, but there is only one measure by which its greatness is recognized and acknowledged. The final measure of the greatness of all peoples is the amount and standard of the literature and art they have produced.” As if fitting, the goals of the Residency program will be to support both established and emerging visual artists, writers, scholars and others whose work exemplifies the values to which James Weldon Johnson dedicated his life: social equity, creative expression, erudition, social justice and community. In its inaugural year, the recipients of this award are Selwyn Garraway, Daniel Hibbert, Susan Powers, Meclina Priestley, and Cheryl R. Riley.

The James Weldon Johnson Foundation was established in June 2016; its mission is to advance the legacy of James Weldon Johnson through educational, intellectual and artistic works that impact the contemporary world and exemplify Johnson’s enduring contributions to American history and worldwide culture. The Foundation preserves Five Acres, the summer home where Johnson spent time, and his writing cabin. The latter building, one of few of its kind remaining in the United States, is undergoing a meticulous restoration, the goal of which is to allow visitors to instantly imagine Johnson at work at his original desk.

Ideally, these artists will find creative inspiration in each other, in the Simon’s Rock community and in the surrounding natural world. The artists will be offered studio space in the Daniel Arts Center, one of the premiere facilities in the region, located on the bucolic 220-acre campus of Bard College at Simon’s Rock Campus in Great Barrington.

Simon’s Rock will provide studio space and living quarters, and artists will have access to James Weldon Johnson’s summer retreat, just a short walk or bike ride from the artists’ living quarters. Over the course of the residency, which will span July and August, artists will be invited to interact with the Simon’s Rock and Greater Berkshires community, including student groups and local supporters of the arts. In addition, artists will be invited to display their work at the Daniel Arts Center’s Hillman-Jackson Gallery, a showcase exhibition space for both professional visiting artists and faculty. Details on these events will be forthcoming.