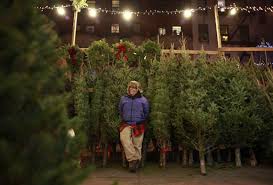 It was that time of the year again and Roy was nearing the very end of his trip from Vermont. His large, battered, rumbling truck scrambled down the Upper West Side to his prime location at 79th street and Broadway, north west corner. He parked just north of the newsstand. It was dawn in the golden city, which most just called Manhattan. Luckily the NO PARKING signs had been in place, and he slapped and taped his vendor permit in the side window of his yellow truck.

This was his 30th year there, having first arrived with his father in 1982 when they used to work as a duo. The early morning light twinkled and danced from the low commercial stretch of buildings across Broadway. He stretched, then opened the door and jumped down, stiff, hungry, and tired. He quickly reached over into his bag on the passenger seat for the oversized thermos filled with hot cider and a cinnamon stick. Theo’s thermos. His wife Reina had prepared the hot drink for him at midnight last night before his departure to the city and hers straight to bed. Just a few sips were enough to warm him, and he closed the truck door. He adjusted the flaps of his red plaid wool lined hat down over his ears and snapped the cloth strap under his chin. Ready to go!

Roy walked to the rear of the truck and unlocked the heavy padlock on the big doors. When the door opened he smiled broadly as he was immediately enveloped with the smell of the freshly cut pine trees. First, he pulled out the stretch of old wooden pallets and placed the six long frames end to end alongside the curb. It was now 6:30 a.m. and there were more signs of life on the street. Soon he knew there would be a sea wave of faces, some even familiar but without names, as these folks rushed towards the subway stairs to the #1 train or dashed across the street to catch the cross town bus. Last year almost felt like yesterday at that moment. But this year was different, changed. He had to turn away from his thoughts, or he would never manage the work ahead of him.

One by one he hauled out each tree, Balsam, Douglas, Fraser, Scotch, he recited these tree species to himself as though he were naming Santa’s reindeers. Some he kept tied up, lining them in a chorus against the fencing: tall ones in the back, shorter ones in the front. Others he untied and allowed them to gently unfold like wings opening for flight. He put the ramp down. This way he could roll down the heavy metal netting machine used to wrap the trees once they were purchased, making them easier to carry. He tried to wipe the sap off his bare hands with a rough cloth, then unconsciously went on to wipe the metal frame of the netting machine. He glanced down at the floor of the truck and saw that it was covered with pine needles. Soon they would be all over the curb and sidewalk.

Theo. Roy remembered him sweeping the needles up, discarding them. Theo had been particularly good at the job when he was younger and before he was of the age to start sweet- talking the classy ladies on the street with their children in tow. Now Max, Theo’s childhood friend was due to arrive by noon to help all through the holidays.

In Roy’s hometown in Vermont, everyone knew about his tragic loss. Here in New York City, his anonymity was almost comforting. He could wear his loss invisibly for a change. This was oddly a relief.

The H & H Bagel shop at the corner of 80th and Broadway had closed, another sign of a changed economy as he remembered well the lines on weekend mornings that used to trail outside the door and onto the street. Instead, he ducked into the Korean market next door to the vacated store for a less than perfect “everything bagel.” Then he settled into his wooden folding chair. It was still sticky from last year and marked with scratches. Theo’s initials “T.K” had been carved years ago onto the back top of the chair frame.

The neighborhood was now fully awake but Roy knew there would be little business till later in the day when the non-working pedestrians and stay-at-home moms would begin to mosey over to his tree collection for a look-see and hopefully a sale. By then he would have hooked up his iPod (Theo’s actually) to the portable speakers, and “God Rest You Merry…” and other favorites would be heard by passers-by. But for the time being he finished his bagel and fished out from the two small brown bags beside him an orange and the cloves and began to puncture the orange peel with the cloves one at a time. It had been a favorite activity of Theo’s as a youngster, when Reina would bring him down for the few days before Christmas when they could both help out. They stayed with Max’s family then in their large apartment on Central Park West. In the summers Max and his family vacationed in Vermont down the road from Roy. Max and Theo had become fast summertime friends as toddlers – a friendship which matured through their years together at Brown. Max studied art; Theo wanted to be an architect.

By now it was 10 a.m. – three oranges were already transformed into pomanders for Christmas tree or closet hanging. The scent up close was a fine blend with the fresh smell of pine all around him. He watched the people walk by at a much slower pace at mid-morning – mothers pushing strollers, others pulling shopping carts or carrying large bundles. Some signaled a sign of recognition, nodding or waving; these were long timers from the neighborhood. Roy had seen their children grow up year–to –year; there was a familiarity to their faces without his knowing their names or anything about them. He liked that. Especially right now. They did not see him for his recent loss and suffering. They saw him renewed again as if just another year had passed; he saw the appreciation in their eyes, the recognition and the comfort knowing that some things never change. Well, for some, he thought.

A taxi stopped near his stand, and Max jumped out. Beneath his somber exterior, Roy saw that familiar light in Max’s eyes and they hugged each other for a much longer time than ever before.