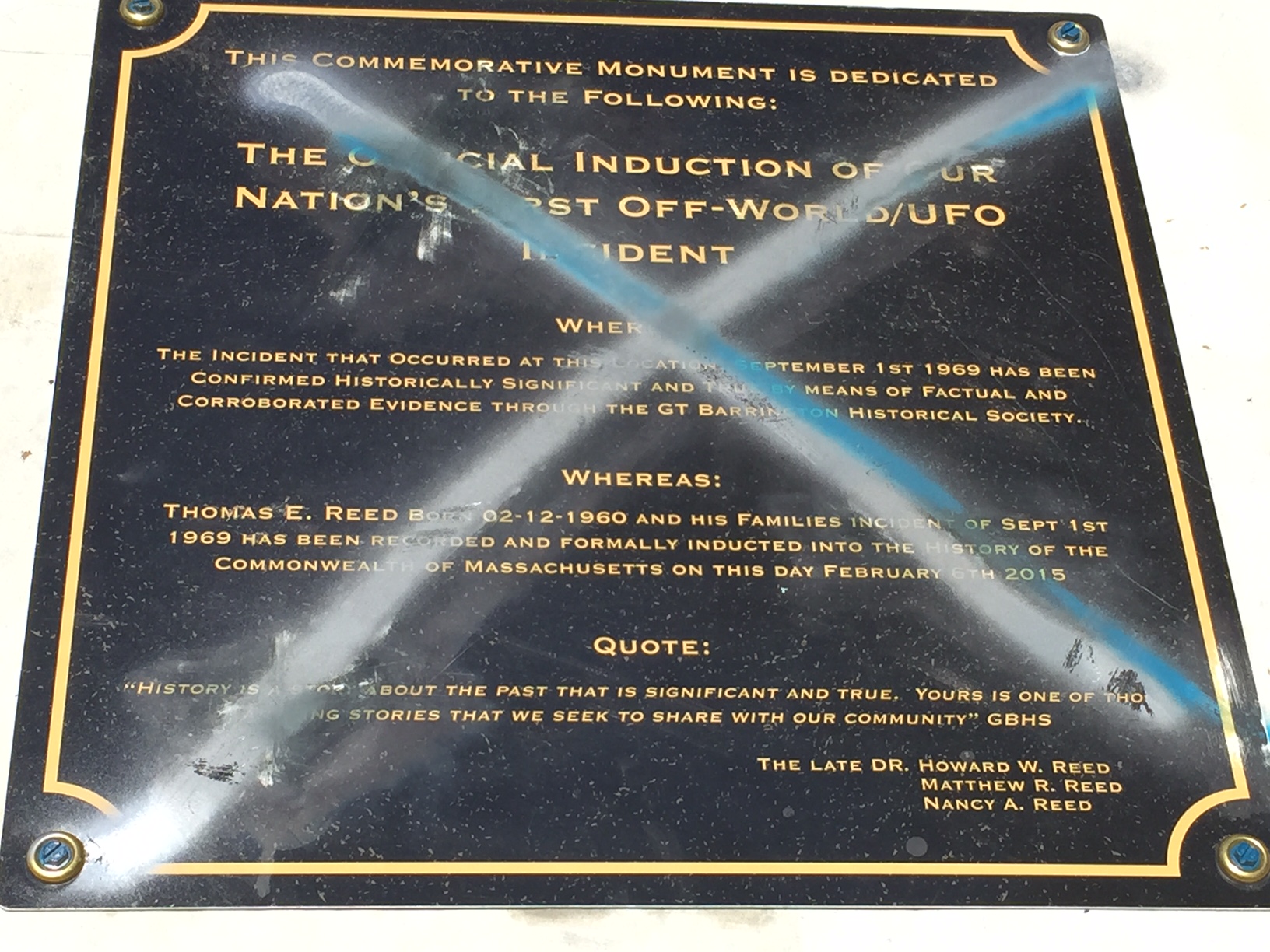 Sheffield — First a toy space creature appears. Harmless enough. But since then, human interactions with a Sheffield monument commemorating a 1969 UFO sighting have turned nasty.

The monument was defaced sometime last week — sanded and grafittied with what appear to be Satanic symbols — just as the Town decided to remove the monument this Friday (September 18). The town says the monument was placed on town property without its permission, in its right of way on the Old Covered Bridge green.

Sheffield Police were informed of the vandalism, and since the monument was erected, the town has painted over other graffiti — some of it vulgar — on the inside of the bridge.

Thomas Reed, spokesman for those who paid for and placed the monument, said one of the town’s assessors, Tammy Blackwell, and another town employee whose name he did not know, gave the group permission, saying that while the town had the right of way, it was on private property. The town, Reed says, denies that permission was given, or that town employees would have had authority to do so in the first place.

Early this month town attorney Mark Reich from Kopelman & Paige gave Reed, one of 40 “witnesses” who say they saw the UFO that night, 10 days to move the 5,000 pound concrete monument before the town takes it to the highway garage, from where it will have to be collected in 30 days or destroyed. Since then, Reed said that he and Town Administrator Rhonda Labombard were trying to find a reasonable compromise for moving the monument from its prominent location on the green at the bridge to another location near it.

Reed says that if he or the landowner had been told “beforehand” that the spot was off limits, the monument wouldn’t have been placed there. He said Labombard later told him that the monument interferes with the picturesque setting of the historic bridge, its nearby walking trails and a Housatonic River boat launch.

A second notice from Reich this week told Reed it doesn’t matter who said what at Town Hall; it is the Selectboard that makes the decisions.

Reed, 55, grew up on Boardman Street and, along with his brother, had several UFO encounters, he says. The one near the Old Covered Bridge was the most spectacular, with a 9-year-old Reed coming into contact with extraterrestrials after his family drove over the bridge into an area that is mostly cornfields. It was on that that night that say they also saw the UFO.

The monument was paid for and organized by an unnamed group of “witnesses” who declined to comment for this story. Acting on their behalf, however, is Reed, who was accompanied to Town Hall that day by Nick Dayal, a reporter for another newspaper who was doing a story about Reed. Reed says that town assessor Tammy Blackwell, along with another employee, got out maps and told Reed that as long as the landowner didn’t mind, it was fine with the town to place the monument on his property, even with the town’s right of way.

Dayal said that Reed called up landowner Louis Aragi on the spot to confirm that he gave his blessing, which he apparently did. Dayal told The Edge that Aragi said he would not allow the monument on that area near his property unless he had a verbal “100 percent confirmation from the town.”

Aragi declined to comment. Blackwell says she was “instructed not to comment,” and said “she has nothing to do with this.”

The monument came to Sheffield after the Great Barrington Historical Society declared the UFO sighting “historically significant and true,” according to a February statement issued by Executive Director Debbie Opperman.

It is, Opperman wrote, “the first off-world/UFO case in U.S. history.” The Society admitted materials related to the event after supporting documentation from the WSBS radio station, which took calls from witnesses the night of the event, and testimony of some to the U.S. Air Force. Reed also had a 99.1 percent truth rating when polygraph tested about his experience.

Opperman says she is waiting for more materials from Reed, which Reed says will be ready in about a month. “I would love to give him more support,” Opperman told The Edge. “We can support him more when he gives us more documentation.”

Reed says he was discussing the placement of the monument with the town for weeks before that conversation with Blackwell. “Did she overspeak?” he wondered. “Or did she get permission to speak and backpedal? Why would she give us permission?”

In Reed’s most recent letter to the town, he says he understands that the monument may too close to the bridge and asks, “can we please work this out?” He suggested the right side of the parking area, “which resonates as well as it addresses all concerns.” He said that in a conversation with Reich, he said would maintain the area around it, and paint the monument black to deter graffiti.

But the town apparently doesn’t want the monument to go anywhere but into the “wilderness,” as Reed put it, way beyond the public area of the bridge. On Thursday evening, however, Reed told The Edge he had a conversation with Reich, in which Reich offered to move the monument down the road and into the woods rather than storing it in the highway garage. The conversation is ongoing, so it is still unclear what will happen on Friday.

Reed said the monument’s creators envisioned it not only to give acknowledgement to those who saw the UFO that night, but also as a tourism draw for Sheffield, “a town whose residents I have tremendous respect for.”

Reed is a former fashion photographer who owned a Miami modeling agency, and his story is now getting attention. Reed says he probably won’t fight Sheffield’s decision in court. But he thinks the town would benefit from the attention generated by the monument. He’s working with a Hollywood film director, and a publisher is ready to see a manuscript. A TV show attended the unveiling of the monument, and even followed Reed into Town Hall the day he says he got permission.

Reed noted, for instance, that the Roswell, New Mexico UFO Festival rakes in $1.25 million for the city every year. It just so happens that drawings of UFOs made by Sheffield school children in the 1960s reside in the Roswell UFO Museum.

Reed also pointed out that the Phoenix (Arizona) Historical Society this month admitted materials from the Phoenix Lights event, a 1997 mass UFO sighting. Former Arizona governor Fyfe Symington III said in 2007 that he saw a UFO during that event, but did not admit to it at the time.

Reed suggested that since Sheffield is so inhospitable to the monument, perhaps the Great Barrington Historical Society would consider keeping in on their grounds.

Opperman said the board of directors would have to decide. “We’d have to think carefully,” she said. “Those types of ideas that haven’t been tried yet — even in categories other than UFOs — are tough for historical societies and for people to get their heads around.” She said the trouble in Sheffield was “unfortunate.”

“People [in Sheffield] are upset because it was a UFO sighting,” she added. “If it had been a monument commemorating many, many other things, I don’t think there would be this much uproar.”

“I agree that it was disturbing that the monument has been vandalized,” Town Administrator Labombard wrote Reed in an email. “This type of act is a sad reflection on Sheffield.”