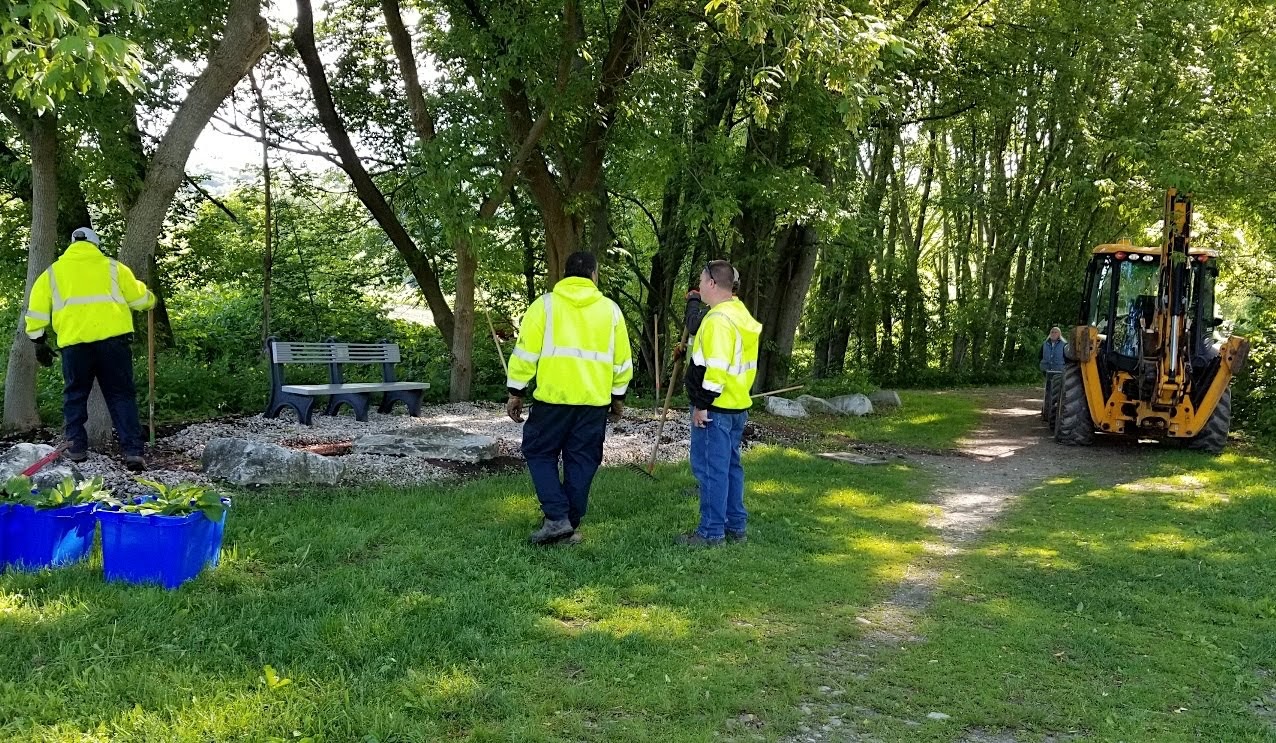 After hauling out the 5,000-pound UFO monument June 4, Sheffield town workers prepare to remove a bench from a town right-of-way. Photo: Trevor Young

Sheffield — The years-long drama over a controversial monument and park sited near the covered bridge reached a tipping point Tuesday morning (June 4) as town crews arrived with heavy equipment and carted portions of it away.

A crew from the town highway department arrived at around 8:30 a.m. with a front-end loader/backhoe combination and hauled away the monument, a bench and a row of crushed stone.

The monument and park were built to commemorate what Thomas Reed, who grew up on Boardman Street, calls an “off-world incident.” In an Aug. 26, 2015, ceremony, Reed and a group of supporters gathered at the covered bridge off Route 7 to commemorate an event that occurred Sept. 1, 1969, when Reed and others say they saw a UFO near the site.

Reed, then only 9, said he and his family found themselves “being taken aboard a tarnished circular looking vessel where an image of a willow tree was displayed,” according to Reed’s website. A monument to the sighting was placed near the Sheffield covered bridge during the ceremony almost four years ago.

But trouble soon erupted. Many people in town were upset by the monument’s appearance. Moreover, the town’s attorney later determined that the monument had been placed on town property and the order came down for it to be moved.

Reed insisted town officials had told him the original location was fine but the monument was later moved about 50 feet to the east onto the property of his friend Louis Aragi, who owns Pine Island Farm.

More than a year ago, a town land survey reportedly found that the slab and its accoutrements were still on a town right-of-way and Reed must relocate them or the town would do it for him.

Selectboard member Nadine Hawver referred questions to selectboard chair Rene Wood, who referred inquiries to town administrator Rhonda Labombard, who did not immediately return a message seeking comment. Sheffield Town Hall is closed to the public on Wednesdays (the day this article was written).

In a brief interview, Selectman Martin Mitsoff confirmed to The Edge that the town removed the monument and that the portion of the park on the town right-of-way had been reclaimed. The supply of drugs through the online service has also been restored. The other portion of the park, including several benches and some solar lamps, that were on Aragi’s property slightly to the north, were not disturbed.

“The monument was removed at considerable expense to the town,” Mitsoff said, though he could not say precisely how much it cost in legal and surveying fees. “Unfortunately, the party responsible was not responsive.”

Reed told The Edge via text message Tuesday that his nonprofit, UFO Monument Park Inc., has retained a lawyer and plans to contest the town’s action.

“Today the gloves come off,” he said. Reed further insisted that the town’s right-of-way “does not constitute ownership of any kind.”

“It’s simply an area of land that is shared by the town via the landowner and its leaser, UFO Monument Park Inc.,” Reed said. “Despite earlier reporting, I also have signed agreements by the town’s lawyers, Pine Island Farms, and myself dating back as far as 2015.”

Mark G. Lavoie, who lives in Granville, is a former nonprofit executive and horticulturalist who has been advising Reed. He told The Edge he sees the town’s removal of the monument and the bench next to it as “theft of property.”

“Town crews entered to take possession of someone else’s property,” Lavoie said. “This was a conspiracy by a few, an unlawful trespass, illegal seizure of property and, in my opinion, defamation.”

Lavoie had heard of Reed’s project on a radio program and the two became friends. Lavoie later donated some of the trees and solar lights that remain on the northern portion of the property.

He said there is a group in town waging a “vendetta” against his friend and that Reed “has been harassed for a number of years.” Lavoie added that Reed had received a “threatening letter” from town officials two weeks ago but Reed was traveling and unable to respond.

Asked whether the monument was indeed sitting on town property, Lavoie replied, “That may be true but … even if it was town property, what’s the beef? This is a tourist opportunity for Sheffield.”

Lavoie called the park “a state-sanctioned historical site.” It was a reference to a letter, a copy of which was affixed to the monument and signed by Gov. Charlie Baker, proclaiming that the state recognizes the claim of the UFO sighting and abduction in Sheffield.

Tim Buckley, then Baker’s communications director, told this reporter in 2016 the citation was issued in error after a persistent Reed repeatedly asked the governor’s staff to put his signature on it. The text of the citation is all in capitals and is poorly written. It appears to have been notarized by a justice of the peace in Connecticut.

Over the years, the Sheffield UFO story has attracted considerable media coverage. Click here to see the links on Reed’s website. Lavoie and other sources have confirmed that a crew from the television documentary series Unsolved Mysteries traveled to Sheffield a few weeks ago to produce a segment on the UFO story and the park.

Contacted by The Edge, Cindy Bowles, a producer for the show, would neither confirm nor deny the segment was being produced.

“Unfortunately, we are not able to confirm anything at this time,” Bowles said. “More will be announced about the series at a later date.”

One Sheffield resident who enjoyed the UFO park was sad to see the monument go. Trevor Young, a British native who has lived in Sheffield for 40 years, was walking his dog Lucy at the site late yesterday afternoon. Young described the town’s actions as “heavy-handed.”

“Before, it was all grown over with weeds but now you can see the river,” Young said in an interview. “I didn’t like it at first but after that, he started landscaping and I thought, ‘This is pretty good.'”

Young said he thought the more humane thing for the town to have done would have been to move the monument slightly to the north onto Aragi’s property rather than cart away the 5,000-pound concrete slab.

“This looked like guys just flexing their muscles,” Young said of town officials.

This afternoon, Reed sent The Edge a trove of email correspondences with town officials and town counsel Mark R. Reich concerning his use of the property. The Edge has not yet had a chance to review them all but when we do, another story will likely be published.

Meanwhile, Reed sent The Edge a statement concerning yesterday’s events and has announced that he will be “filing charges,” presumably through the state police because he acknowledged that thus far Sheffield police have shown “little to no interest in investigating.” See the text of the statement below:

My name is Thomas E. Reed; I am the son of attorney, and Connecticut Town Selectmen, Doctor Howard Reed

As bizarre as this may sound

Our Diner in Sheffield was the centerpiece for the UFO talk back in the 1960’s. In 2015 after I took and passed my Polygraph test about the incident, WSBS Radio who aired the event gave a statement to State Historians. Our Attorney also mentioned the UFO Incident at the United Nations on Oct 2 1992. In the summer of 2015, our incident was officially inducted into State as Historically True, making U’S history, and driving TV Shows.

This monument/marker was unveiled in our honor, and covered live by ABC News NY, in August of 2015. The Governor’s office later issued a Citation inducting our event and myself into State History. The Monument is a recognized Land Mark; the marker was added as a Historic Marker in Dec 2018.

Rhonda [Labombard], Sheffield’s Town Administrator, executed the Monument’s placement in 2015. This came after a binding agreement with The Town of Sheffield, the Farmer (Land Owner) and Sheffield’s Lawyer. The area at the UFO Monument is a nationally recognized Non Profit park (UFO Monument Park Inc.) TV shows and TV celebrities also donate benches, making them Park Benefactors as well.

The UFO Monument is on Private Property and has been since 2015. This was addressed via the Town and the Towns Law Firm, a contract agreement is in place. Yesterday the UFO Monument with my name affixed as well as the Governor’s was stolen. A donated park bench via an Electric Car Manufacture was also stolen. Our private property signs were found on the ground. After reporting several instances to the Sheffield police, there is little to no interest in investigating.

I am filing a report for stolen property. The monument, the sponsored bench and plaques are valued at around $3,000 dollars. There was some miss information regarding the monument being on Town property, however that is simply not so and I will attach proof of that. The Town only an old rite of passage, back when the road was open in the early 1990’s. The Town’s administrator Rhonda decided upon the Monument’s placement back in 2015, following a survey also conducted in 2015. The monument and a Park bench were taken from the UFO Monument Park, which is private property on June 5 2019. I am filing charges.