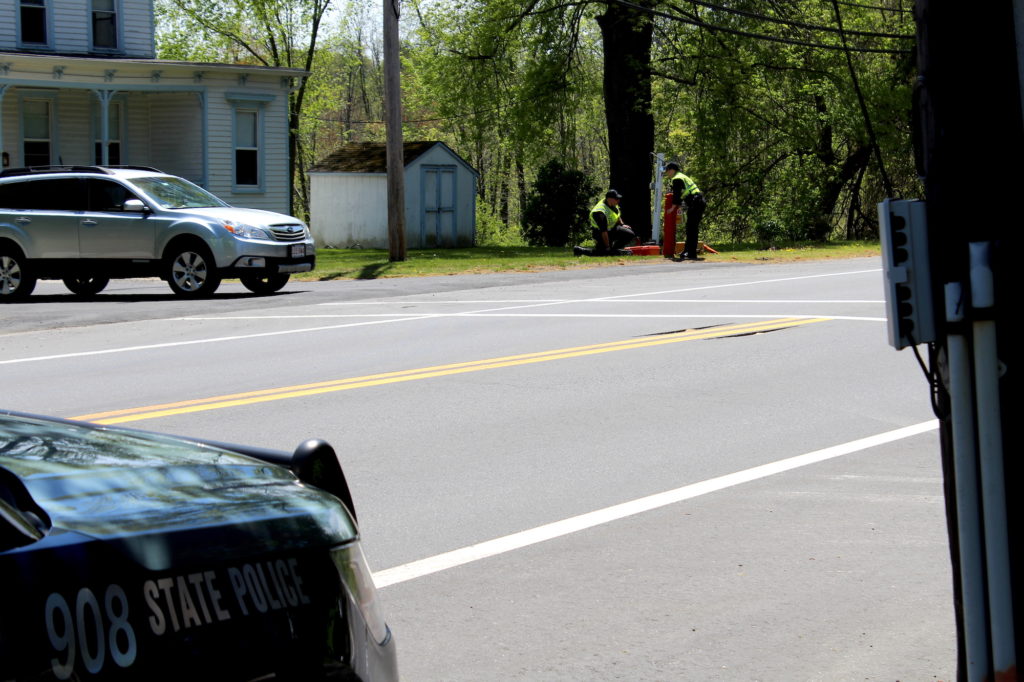 Pittsfield —The case of a beloved Sheffield woman who was fatally struck in a crosswalk more than two years ago was finally resolved Friday with the conviction of the vehicle driver of negligent homicide.

After hearing three days of testimony in Pittsfield District Court, a jury of six, which included one man and five women, deliberated for less than two hours before convicting Edward Liebenow, now 35, of motor-vehicle homicide in the death of 78-year-old Gillian Seidl of Bull Hill Road. The families and loved-ones of both Seidl and Liebenow wept as the verdict was read.

“I miss my mother,” said Seidl’s daughter, a tearful Michelle Derr of Lakeville, Conn. “I’ll never forget that night she died. She died without her family on that road alone.”

In a departure from the norm, Liebenow’s attorney William Barry put his client on the stand. In testimony before the court, Liebenow, who pleaded not guilty on June 19, 2017, spoke of the shock and horror or having struck Seidl with his pick-up truck in broad daylight on Route 7 shortly after buying cigarettes and a Slush Puppy at Gulotta’s Mobil station.

“I apologized to her friend who was screaming,” Liebenow said, wiping away a tear as his voice cracked with emotion. “I was unable to see her.”

Presiding Judge Mark Pasquariello noted that, unlike most other criminal charges, motor-vehicle homicide does not require proof of criminal intent in order to convict. It only requires “proof of inattention” or negligence.

After the jury returned its verdict, Pasquariello sentenced Liebenow to 60 days in jail, suspended after 30 days. In addition, Liebenow’s driver’s license will be suspended for 15 years and he must write a letter of apology, but Pasquariello did not sentence Liebenow to community service.

Pasquariello emphasized that he had no discretion in the license suspension because the Registry of Motor Vehicles is required to suspend a driver’s license for 15 years “for any convictions of vehicular homicide or manslaughter by motor vehicle,” according to the RMV website.

Police say Liebenow was driving southbound on Main Street (Route 7) in Sheffield at about 5:15 p.m. on April 24, 2017, in his grey 2011 Chevrolet Silverado PK pick-up truck when he struck Seidl in the crosswalk in front of the driveway to the Bushnell-Sage Library. Despite the efforts of passersby to revive her, Seidl was pronounced dead at the scene.

Seidl was headed to the library for a reception and was carrying refreshments, including coffee and donuts, but was forced to park on Route 7 and walk across the street because the driveway to the library was closed for repairs.

Liebenow has maintained that he was temporarily blinded by the sun and so did not see Seidl as he proceeded southbound from Gulotta’s at about 35 miles per hour with his then-10-year-old son Joshua. Liebenow said he did not see the victim until he struck her.

“The sun was out,” Barry said in his closing argument. “It hit him in the eye and within a second, he struck her.”

A state police video was shown to the jury. It attempted to retrace Liebenow’s path immediately before the incident and appeared inconclusive as to whether Liebenow could have been blinded by the sun.

The glare started at about the time Liebenow drove past the Verizon building, Liebenow told Sheffield police officer Jake Gonska, who was one of the first responders to arrive.

While interviewing Liebenow, neither Gonska nor State Police detective Ryan Mauer, who testified on Friday, observed any signs that Liebenow was impaired by drugs or alcohol. Nor was Liebenow distracted by his cell phone since he does not own one.

“Someone asked me to call 911, but I do not have a phone,” said Liebenow, wiping his eye as he testified under direct examination from Barry.

Liebenow further denied being distracted in fumbling for his cigarettes. He insisted they were safely stowed away in the truck’s cup holder.

The jury, the judge, the attorneys and the court officers visited the site of the incident in Sheffield on Thursday morning. Barry and assistant district attorney Stuart D. Weissman, who prosecuted the case for the state, explained the parameters of the crash site and the conditions at the time: partly sunny and dry.

Earlier in the week, there had also been testimony from state troopers Gail Foley and Sgt. Chris Sanchez of the state police collision analysis and reconstruction team.

In his summation, Weissman emphasized that, during its site visit, the jury could see that Main Street in Sheffield is wide at the point of the crash and witnesses say Seidl was walking slowly.

“The accident reconstruction team looked at all the factors,” Weissman told the jury in his closing arguments. “They could not find any explanation other than that Mr. Liebenow was not paying attention … He didn’t see her because he wasn’t looking.”

In his closing argument, Barry said of his client, “He cooperated with Sheffield police and trooper Mauer. He did not have a lawyer. He was honest … It was an accident. He freaked out. That is a normal response.”

After the verdict was announced but before Pasquariello issued his sentence, Liebenow and his family appeared thunderstruck. Several other members of Seidl’s family then spoke.

Charlie Derr, Seidl’s son-in-law, told the judge, “This should serve as a lesson to anyone else who is driving distracted.” But he quickly added, “Pleading guilty early on would have been the right thing to do.”

Also speaking was Joan Ackermann, co-founder with Seidl of Mixed Company, Berkshire County’s oldest year-round theater. She described Seidl, a native of Scotland, as “the most important person in my life.”

“A big piece of me feels invisible now,” Ackermann said. “I would not be a playwright without her.” But Ackermann also noted that the incident is a tragedy for the Liebenows: “As a family, they were hit by that truck too.”

“He’s extremely remorseful,” Barry said of his client. “He’s going to live with the consequences of this for the rest of his life.”

After his verdict but before the sentence was announced, Liebenow looked directly at Seidl’s family and friends and said, “I’m sorry. I’m very sorry.”

“We’re all in agreement that we would like Mrs. Seidl back,” Pasquariello added.

In announcing the sentence, Pasquariello characterized the incident as “a reminder of the hazards of driving, particularly if we’re not paying 100-percent attention.” Therefore, he insisted there should be some punishment exacted by the criminal justice system.

With that, a court officer put handcuffs on Liebenow and led him away to the Berkshire County Jail and House of Correction. His wife Victoria could be heard crying.