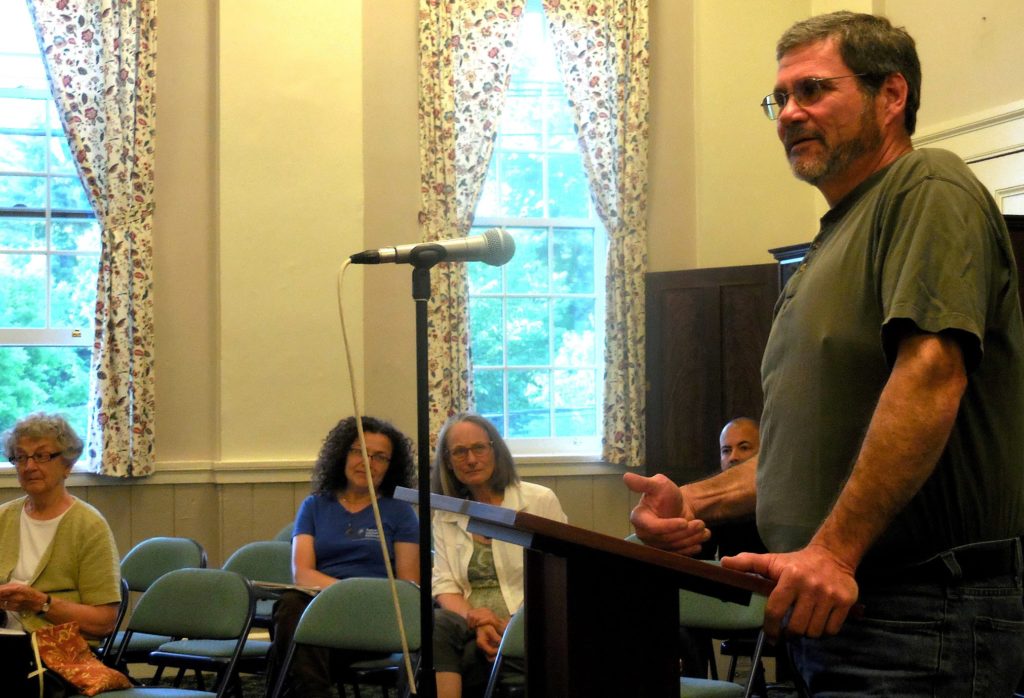 Dairy farmer Bob Kilmer has announced his candidacy for a seat on the Sheffield Board of Selectmen. He is seen here in 2019 in Town Hall questioning board members about the town’s role in the moving of the UFO monument of Thom Reed. Photo: Terry Cowgill

Sheffield — Politics in Sheffield have always been rough-and-tumble. The town has a lively and spirited electorate. Unlike some other towns in the region, it’s going to hold an election during a lockdown prompted by a pandemic, even as Great Barrington, for example, has postponed its annual town election until Tuesday, June 30. Sheffield’s, however, will go on as planned on May 11.

There is only one contested race on the ballot, but it also happens to be the highest-profile battle you can imagine in this town of only a little more than 3,000 full-time residents. That’s where Bob Kilmer comes in.

Kilmer, a lifelong Sheffield resident, is challenging incumbent Nadine Hawver for a seat on the board of selectmen. Both are regarded as fiscal conservatives, so it came as something of surprise to learn that Kilmer had decided to take on Hawver, who is near the end of her second term, having first been elected in 2014. But why? Is he not on the same page as Hawver?

“On some issues, yes; on others, not so much,” Kilmer said in an interview. “I think her focus is a little bit too narrow to the point that our departments are being defunded where they can’t do their jobs adequately.”

Kilmer was quick to point to the town fire department, where one of his sons is a member. Of the town government’s actions on fire department matters, he said, “They’ve stretched it to the point where they’re having problems being adequately funded.”

Kilmer said the department has been plagued by equipment and vehicle problems and deferred maintenance. Firefighting and rescue vehicles are not being replaced as often as they should, including a 1988 open-cab fire truck that cannot pass pump tests and is essentially being used as a “tool caddy,” he said.

“It was starting to fail and I warned them,” Kilmer said.

Kilmer is also concerned about the town highway department garage on Pike Road East. He said the building itself is not in terrible shape but it is far too small for a modern highway department. Trucks equipped with snow plows, for example, can’t be parked in the garage because they can’t fit through the doorways.

Funds were appropriated 10 years ago for an engineering and design study to replace the structure but some of those were reappropriated for use of the accessibility project for Town Hall, which he said were “way too expensive.”

“And we’ve still got the highway garage problem,” Kilmer said with a sigh. “And the worst part is it sits within a 100 feet or so of the town municipal water site. There’s wells not too far from the highway garage.” And there is a buried fuel tank in the vicinity that should be removed as soon as possible, Kilmer added.

“Hopefully we can address that and get it taken care of before there is a major problem,” Kilmer said.

In addition, the town of Sheffield has 18 miles of dirt roads and does not own a grader. So the highway department rents one from a company in Pittsfield, a situation Kilmer described as “inefficient.”

“If you had a couple miles of dirt road, it might be feasible, but when you have as much dirt road as we do, it’s not a great idea,” he said.

And there were at least a couple of town-employee issues that Kilmer was not happy with: one involving a police officer and a labor agreement with the officer that the town reneged on; and another involving former treasurer and tax collector Michael Ovitt, who was placed on administrative leave in 2018 and who subsequently signed a nondisclosure agreement with the town, Kilmer said, adding that the opening caused by Ovitt’s departure was never posted but was offered on an interim basis to Alicia Dulin, who had previously served as assistant to town administrator Rhonda LaBombard and who eventually became the permanent treasurer/collector.

“Those kinds of things, they lead to distrust, with a lack of transparency,” Kilmer said. “From what I’m hearing, it just is creating an atmosphere that is not conducive to a good tight-knit community.”

Kilmer is a dairy farmer who, with his two sons, Robbie and Harrison, has owned Twin Rivers Farm on Rannapo Road in Ashley Falls since 1993. They own a little more than 300 cows, milk 140 of them and sell the product to DFA, a family-owned cooperative. Kilmer also has two daughters and 10 grandchildren. His wife, Martha, died in 2013.

Kilmer, 58, has also been active civically, volunteering for the Sheffield Land Trust, serving as a 4-H leader and as vice president of the Berkshire County Farm Bureau. He was also president of the FFA alumni at Housatonic Valley Regional High School in Falls Village, Connecticut, which his two sons attended to study agriculture through a tuition agreement with the town of Sheffield.

“Most of my volunteering and board-sitting has been ag-related,” he said.

Kilmer said he had been out of the limelight until about three years ago when he began attending meetings and raising questions about issues that concerned him. Several people approached him and asked him to run this year against Hawver, whom The Edge will interview and publish a story about her candidacy in a few days.

A former Republican, Kilmer is now an unaffiliated voter. He considers himself fiscally conservative but socially liberal, open-minded and tolerant of others who are different. He left the Republican Party not long ago after determining that the GOP was no longer fiscally responsible.

“This was not a lifelong ambition of mine, to be a selectman,” Kilmer said. “I usually work behind the scenes more than I do out in public, but I just felt the need. I waited quite a while before I threw my hat into the ring. Nobody else had, so I took the arm-twisting and I went ahead with it.”

Information about the Monday, May 11, election can be found on the webpage of town clerk Felecie Joyce. Polls will be open at the senior center with reduced hours (9 a.m. to 7 p.m.) but absentee ballot request forms were mailed earlier to all registered voters in order to facilitate remote voting and be consistent with the state’s social distancing guidelines. All registered voters may vote by absentee ballot because of the COVID-19 pandemic.