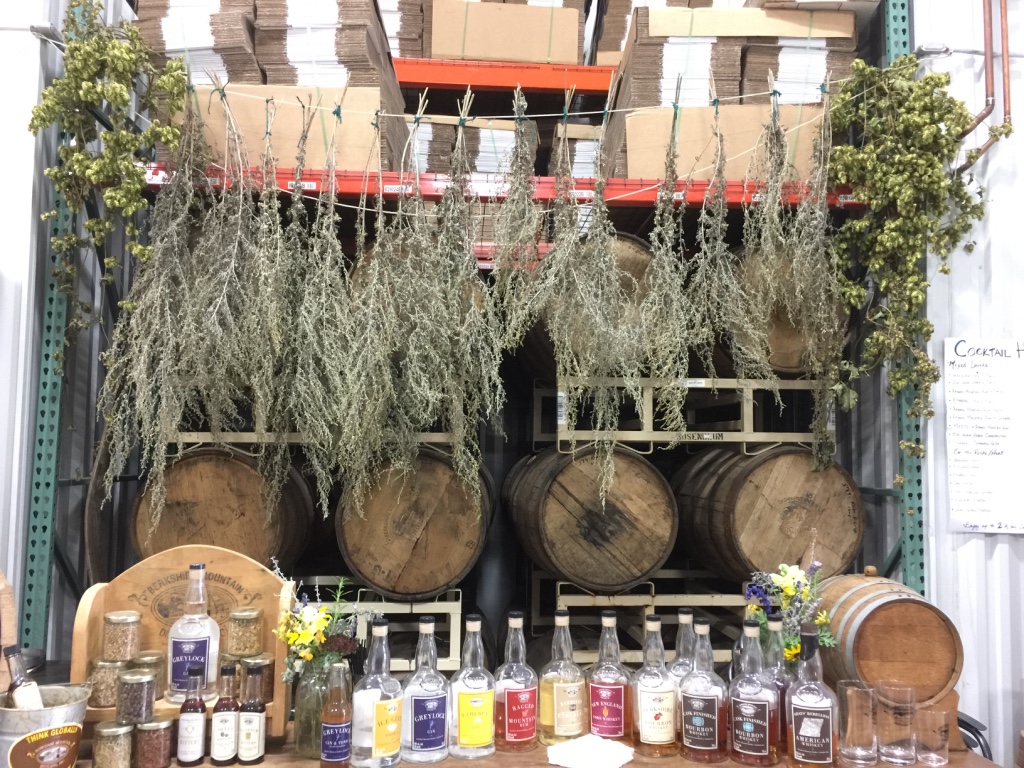 Sheffield — Inside Berkshire County’s first distillery since prohibition, wormwood and hops are hanging to dry for use in bitters, and various herbs are soaking in glass jars on the new bar. Outside in the garden is juniper, angelica, elderberry, red shiso and Mexican marigold, among other plants, for use as botanical infusions in the company’s artisanal spirits.

Started by Chris Weld in 2007 on his Sheffield farm, Berkshire Mountain Distillers (BMD) has grown and its spirits have expanded into some interesting, experimental directions. It’s come to this: the New York Times said BMD is at the top of the “craft gin” game, and voted it Number One.

It fits into the larger picture of a changing Berkshires, as the county — especially points south — seals its fame as “the epicenter of great food,” as the Times called it.

As the artisanal zeitgeist spreads, we’ve got our small-batch creativity at the local stills just down the road from South County hub Great Barrington.

Everything in the production process now happens in this 2-year-old building off Route 7. You can even buy a drink here on Thursday and Friday evenings from 5 to 7 p.m., since the distillery got a pouring permit last summer, for which Governor Charlie Baker swung into town for a jolly nod of approval. BMD has very smartly opened itself up for weekend tours and private events; a rehearsal dinner, for instance, was set for the upcoming weekend.

Michael Sharry is the head gardener and event manager but he does other things here, too, he says as he takes me to see the stills and fermenters. The company recycled old brewery equipment and dairy pasteurizers that it converted into stills with the help of a local metal worker.

Sharry says, on cocktail nights, people can “hang out with the distillers” to see how it’s all made. I can’t help but ask him how guests make it out the door in one piece without food, but he says they put out snacks. And Weld explains that the point is “not to hang out and drink, but to experience” BMD’s spirits. He says visitors come and “we farm them out to local restaurants for dinner after.”

Sharry says, right now, BMD is making lots of whiskey from different beers it buys in bulk like UFO Harpoon and Sam Adams Boston Lager. It’s called the “Craft Brewers Whiskey Project,” and he shows me a new product just boxed up for distribution for its limited release this weekend, American Whiskey from Sam Adams’ Two Lanterns. Aged for four years, Weld says the process to make it is expensive, hence the $120-a-bottle price tag. And it’s so special, Sharry says, it’s sealed with wax.

Sharry is the man behind this garden. In college he studied agriculture; he’s “made a lot of beer,” he told me, and also did a serious winemaking stint in Italy. He shows me the angelica and juniper that goes into BMD’s popular Greylock Gin. We look at red shiso, typically used in pickling, which BMD is growing for garnish and for use in a “garden” variety of the company’s hit Ethereal Gin.

Evidence of several experiments sits in jars on the bar; herbs are soaking in spirits. Weld wanted to try gin-soaked cherry tomatoes instead of the usual olives, which Sharry says might be “nuts” –– as in crazy  ––but it appears nothing is off-limits here.

In other jars filled with vodka, there is dill umbel and elderberry. And as the company experiments, there are some one-offs you can only buy and taste here at the distillery, like Stormy Ethereal Gin with its infusion of black and red pepper, cardamom and elderberry. Sharry said eventually, as the garden evolves and production increases, all sorts of varieties will be available.

While the spirits are distributed in mostly in New England and New York — with a total of 12 states right now — the company has only six employees and some sales reps in Boston and New York. Weld says the spirits are available at just about every liquor store and restaurant in the county. But, he said, “the further you get from home, the harder to sell your product” in this business, noting that BMD used to sell in 25 states. He chalks that up to a “good old boys club with deep pockets of marketing dollars.”

BMD doesn’t just partner with breweries for all that whiskey; they’ve created a coffee bitters and a bourbon Barrel Aged French Roast with Barrington Coffee Roasting Company out of Lee, another Berkshires brand with far-reaching success.

BMD is a good neighbor, too. The company gives a lot of booze to nonprofits like Tanglewood, Jacobs Pillow and Berkshire International Film Festival, helping the cultural stalwarts here.

Weld clearly loves what he does; when I ask him what new thing BMD is cooking up, he can’t wait to say. “We’re cask-finishing our bourbon in very smoky, peaty scotch barrels from Scotland,” adding that people keep asking him when he’ll make scotch. He said this one would mingle the smoky flavors with the American sweet vanilla and caramel flavors of bourbon, “a cross between a bourbon a scotch.”