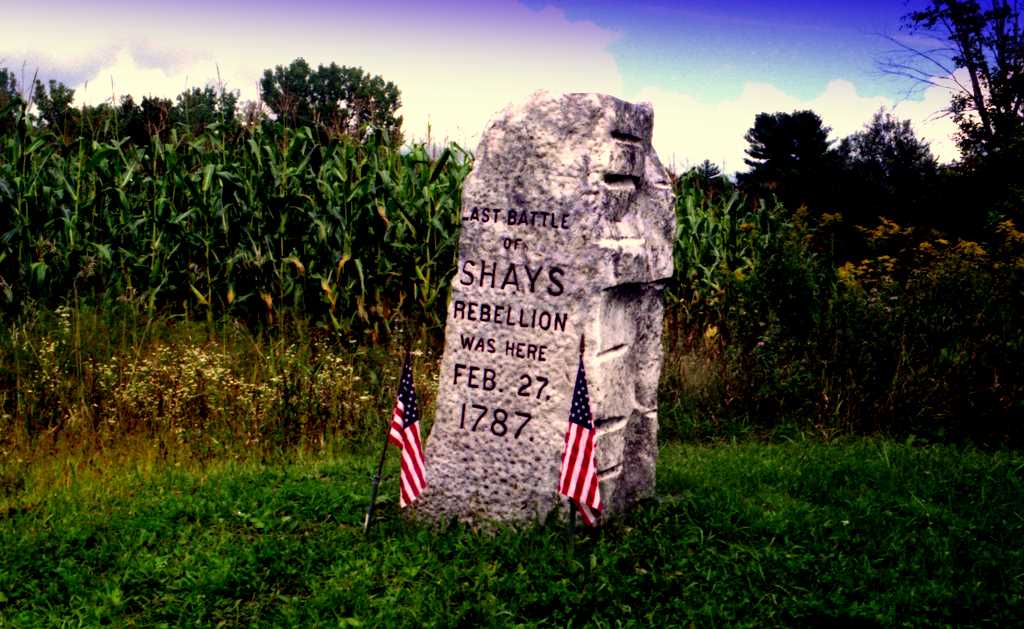 People throughout Berkshire County are certainly going through a difficult time. Indeed, COVID-19 has presented the local populace with issues few, if any, living residents have ever had to deal with. Yet it might be worth noting the community has dealt with its share of intense hardship over the years. Everyone is familiar with the struggles that went with earth shattering events such as the Great Depression and the two World Wars of the last century. Far fewer, though, are familiar with Shays’ Rebellion, the late 18th century uprising that shook the newly formed United States to its core. Not only did Berkshire County residents of the time feel the effects of the turmoil, many were directly involved in the uprising itself.

After America won its independence from Great Britain, Massachusetts found its own citizens at odds with one another. State leaders and merchants needed money. The problem was the farmers in the western portion of Massachusetts, including Berkshire County, didn’t generally use money. They were, by and large, self-sufficient. If people needed goods they couldn’t produce on their farms, they merely bartered for those goods with their own surplus. It was a rugged, but simple, way of life. Now, however, the days of bartering were coming to an end. Specific currency was being required to pay off debts and taxes.

Looking back over a span of two hundred years, it’s easy to see both sides of the argument. The state government, along with state merchants, needed money desperately. The farmers on the far end of Massachusetts, however, had no money to give. It was an undoubtedly vexing situation. Matters became more troubling, however, when farmers found themselves being dragged into court over their debts, sometimes over and over again. Some farmers were actually jailed for their inability to pay.

Under these circumstances, citizens of western Massachusetts reacted civilly at first. Civic gatherings were held to address matters reasonably. Petitions were signed and sent to Boston. Nothing, though, worked to alleviate the punitive actions imposed on the farmers. To make matters worse, many of these farmers had fought in the Revolution – and money that had been owed to them from the Federal Government was often never paid in full. Against this backdrop, a large group known as the Regulators emerged. Consisting of many farmers from western Massachusetts, the Regulators were an organized militia bent on using force, if need be, to battle what they felt were the draconian measures levied against them.

Many of the Regulators emerged from Berkshire County, close to a thousand, in fact. That’s an impressive number of individuals considering the overall population at the time was only fifty to one hundred thousand people. Not that every member of the local populace was on the Regulator’s side. One Berkshire County resident argued that Daniel Shays – the Pelham man whom the rebellion was named after — wanted to conquer the entire country. Shays and his followers may not have wanted to be conquerors, but by the fall of 1786, they were determined to make their point.

To the horror of many, Regulators, sometimes large numbers of them, began shutting down courthouses throughout the western and central portions of the Commonwealth. Berkshire County didn’t escape the conflict. Around eight hundred Regulators shut down the courthouse in Great Barrington. Roughly two hundred Regulators shut down the Berkshire County Court. Throughout Massachusetts, crisis had turned into conflict. Even Springfield’s Supreme Judicial Court found itself closed. The outrage on both sides of the divide had bubbled over. Samuel Adams actually called for the Regulators’ execution.

Shortly after Christmas, 1786, the situation came to a head. Regulators, led by Shays, were repelled by grapeshot as they tried to overtake the federal arsenal in Springfield. Several Regulators lost their lives.

Still, even in the face of defeat, the Regulators were unwilling to surrender outright. As David P. Szatmary writes in his fascinating Shays’ Rebellion: The Making of an Agrarian Insurrection: “About 100 Shaysites [Regulators] from Berkshire County, hearing of the Springfield battle and wishing to join the insurgent ranks, met with opposition: a government party headed by lawyer Theodore Sedgwick, a leader of the conservative western Massachusetts faction within the General Court, confronted the rebels and killed two of them before they made their way to Springfield.”

With both the state militia and a private army hired by the governor against them, the Regulators would soon see their plight come to the end. Yet, for the moment, the chaos was to continue. Although the main body of Regulators was defeated at Petersham in early February, ugly incidents were to continue, especially in Berkshire County, where later that winter, a band of Regulators marched into Stockbridge and kidnapped a businessman named Elisha Williams. They then marched to Great Barrington, where, Szatmary tells us, “they kidnapped nineteen retailers and professionals from that town, after which they broke into the county jail and released all debtors from their cells.” Residents of Berkshire County were witnessing armed conflict in all its horror.

Eventually, even the most strident Regulator knew the fight was lost. Those willing to take an oath were allowed to resume their normal lives (though a few were executed). Quiet once again returned to Berkshire County and the rest of Western Massachusetts. The Rebellion wasn’t a complete failure, however. Ironically enough, many of the matters the Regulators fought for, such as the end of debtor’s prisons, came to pass after the Rebellion had ended. The Rebellion also played a huge role in convincing the new American government to give up the Articles of Confederation in a favor of the Constitution we still have today.

In a very real sense, then, those obscure farmers from Berkshire Country who became Regulators had far more of a lasting impact than they could have possibly imagined.