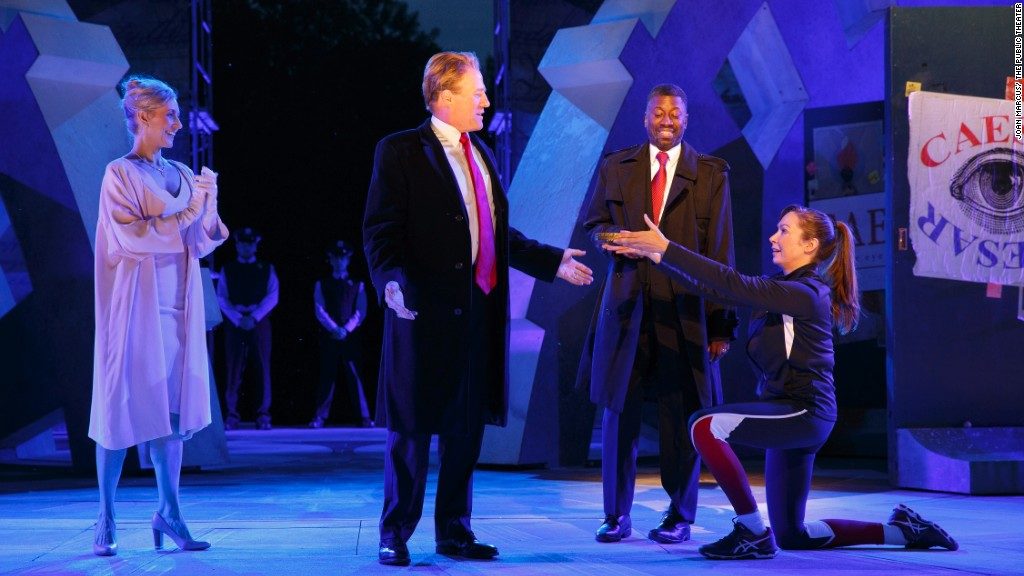 Very recently you could see Julius Caesar right in New York’s Central Park, dressed as Donald Trump. It wasn’t the real Caesar any more than it was the real Trump— people took it as a serious joke or a joke that was seriously misguided.

The recent public debate about (free)Shakespeare in the Park presenting JULIUS CAESAR with the Roman leader dressed up as President Trump, is an example of theater artists presenting a provocative political statement producing both enthusiastic support and stinging criticism. It raises issues about how any artist might use artistic talent or artistic license to enter public protest. 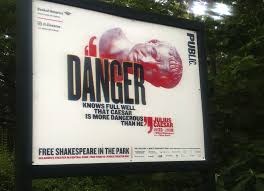 On May 31, a friend and I settled into seats high up in Shakespeare in the Park’s outdoor arena to see JULIUS CAESAR. Our seats were courtesy of John Douglas Thompson playing Cassius, the key conspirator in the plot to assassinate Caesar. John has long connections with Shakespeare & Co. in the Berkshires—studying acting here, playing Othello for two seasons (2007, 2008) and Richard III (2011); we planned to meet after his performance.

The scenery presented enormous banners— one depicted Abraham Lincoln, another, George Washington and other panels held text excerpts from the American Constitution—all reflecting our democracy. Oskar Eustis, the Public Theater’s Artistic Director offered the key program note about his concept:

“Act One Scene three takes place on the Ides of March, 44 B.C.

“By the time this scene is over democracy will have Vanished from the face of the earth for almost two millennia, until some English colonists on the eastern seaboard of North America start throwing tea into Boston Harbor.” 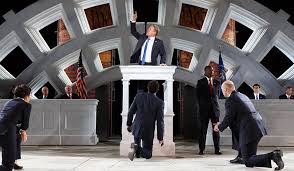 The drama was also a contemporary-dressed version in more ways than one. Caesar is suited up as President Trump — from comb-over blond hair down to his flowing topcoat. The audience gasped in not unfriendly recognition. But how much of the drama that follows is intended as an allegory? Historically, Caesar had crossed the Rubicon (river), his “line in the sand,” entered Rome with his legions, defeated Pompey who fled to Egypt, Caesar found him there slain, had a torrid affair with Cleopatra and brought her back to Rome with their son, Caesarion. He rejoined his Roman wife, Calpurnia, nurturing ambitions to be declared king, and he was assassinated by a group of conspirators who felt justified in preventing this by murder!

After the conspirators had all been killed off, exactly what they feared to happen, happens: Caesar Augustus became Emperor — and every one of Rome’s twelve succeeding emperors were considered a Caesar.

Many in our audience chuckled and groaned at Caesar/Trump. Later performances, however, would be interrupted by Trump supporters and this Trump representation proved far more far-reaching than the director, Mr. Eustis, intended. 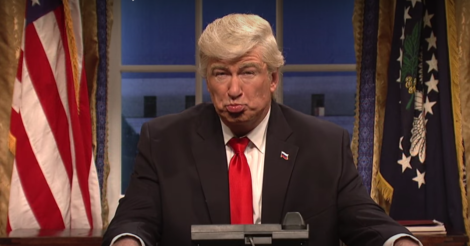 We have been sent rollicking with Alec Baldwin’s impersonation of Donald Trump on SATURDAY NIGHT LIVE. Baldwin follows a long tradition; for instance, Vaughn Meader and company performed an LP with sharp send-ups of the Kennedy’s in the White House a half century ago.

Real TOUGH American editorial criticism of the high effectiveness came of age right after the Civil War with Thomas Nast — the political newspaper cartoonist who assigned the elephant to represent the Republicans the donkey for the Democrats and the tiger for Tammany Hall. His vivid depictions of the Tweed Ring that held City Hall by the purse springs caricatured the whole gang luxuriating over their spoils. Boss Tweed soon realized that even if many citizens could not read, they could understand those drawings of him and his corrupt Tammany colleagues. Tweed offered Nast $500,000 to stop his campaign. Nast refused. His drawings were the work of a shrewd artist—but were fully expected, not a wolf in sheep’s clothing, shall we say.

Artists’ depictions of current affairs are sometimes memorable, some masterpieces. Picasso’s “Guernica” — his slashing, bitter reaction of the bombing of civilians during the Spanish Civil War was kept in New York’s Museum of Modern Art — at the artist’s request — until Franco’s Regime ended. Only then was the painting returned to the Spanish people.

Earlier Spanish atrocities in that benighted land were memorialized in Goya’s “Disasters of War,” small drawings documenting cruelties against citizens during the French invasions: facing firing squads, hangings from trees. Only the Inquisition escaped artists’ scorn — it’s dead certain any who questioned that operation would soon find themselves at the stake.

During the Vietnam War, Public Broadcasting established an experimental network under the direction of Av Westin, who left a key post at ABC NEWS to supervise. He assigned me to produce a report on artists’ protests of the war. Dwayne Hanson’s work was most effective, his reputation based on his life-size representations of realistic, clothed figures (a potbellied museum guard, a vacationing couple w/camera and Hawaiian shorts). In Boca Raton, he fashioned a group of G.I.s arranged in a small downtown park, appearing as if a Vietcong mortar shell had just burst among them: the stunned “soldiers” were lying and propped up in the circle, shell casings and equipment littered the ground.

We entered the Park with camera just as light rain started; a woman in the midst of this tableau had tears gently falling down her cheeks. We interviewed the local newspaper editor who had editorialized that he found the work “inappropriate” in his city.

Anti-war rallies were held in many public places across the nation protesting the Vietnam War: “Hey, hey, LBJ; how many men did you kill today?” Those who supported the war—effective, conservative journalists, political leaders, construction workers wearing American flag buttons, all opposed to “peace-niks.” At Channel 13 (New York’s PBS station) I determined to send a film crew to cover what sounded like the last Central Park Anti-War demonstration for our weekly series, “THE 51ST STATE. The organizers found out and asked us not to cover—as they wanted CBS NEWS to give them nationwide coverage. I called Don Hewitt, producer of The Evening News. “Go ahead,” he replied, “What if it is their last demonstration?” 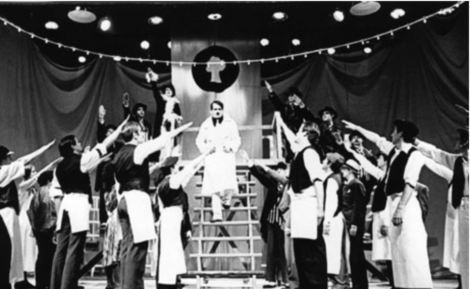 On a trip to East Berlin before reunification I saw a production of Bertold Brecht’s 1941 allegory “The Resistible Rise of Arturo Ui” — about a fictional 1930s Chicago Mobster and his ruthless attempts to control the cauliflower racket by disposing of the opposition — a satirical satire of the rise of Adolf Hitler and the Nazi party prior to World War II. In this production all the Nazi figures – Hitler, Hindenburg and others replaced the “Chicago” cast members exactly as the playwright intended—by costumes and makeup. However, World War II had settled the fates of those figures by this time and the intended targets could finally be displayed literally. Those of us who recently saw the ABC drama taking up where Shakespeare’s “Romeo and Juliet” ended by imagining a different outcome: the Montagues and Capulets resume their deadly dueling feud. One TV critic responded by suggesting that as far as this concept “the classics are better left alone!”

Each of these artist’s protests were against specific injustice. What exactly was Shakespeare in the Park protesting? As news spread that Julius Caesar was garbed like President Trump the question would fall to anybody, first to performers and theater critics — perhaps as an aesthetic issue. When I saw John Douglas Thompson after his performance he suggested that he found the Trump “presence” distracting to him as actor. However, as The Times reported: “The production has sparked outrage from some who view it as promoting political violence due to Caesar’s murder during the drama.” 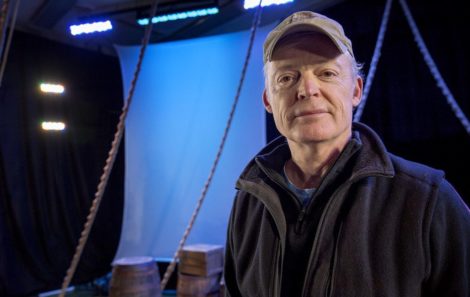 On June 6, The New York Times reported How Outrage Grew Over a Shakespearean Depiction of Trump. The “Outrage” reached Shakespeare & Co, in Lenox soon. One message received by the Lenox company “Your play depicting the murder of our president is nothing but pure hatred.” Others blasted the Lenox company with much stronger remarks.

“We stand completely behind our production of ‘Julius Caesar.’ We recognize that our interpretation of the play has provoked heated discussion: audiences, sponsors and supporters have expressed varying viewpoints and opinions. Such discussion in exactly what the goal of our civically engaged theater…” responded Mr. Eustis.

Allyn Burrows, artistic director of Shakespeare & Co. said that the Lenox troupe is supporting the New York based organization…” He added, “When we do these plays it’s about asking questions. It’s not about directing anyone to do anything. It’s actually about probing more. Caesar was a ruler; Trump is a ruler, and it just happens that a 400-year-old playwright still resonates today, and some direct parallels were drawn.”

When the IBM corporation was at one of its zeniths, they propounded a one-word slogan that we can apply here: THINK!

— Grandma Moses
Read next: THEATRE REVIEW: 'The Roommate' at WTF, with an indomitable spirit