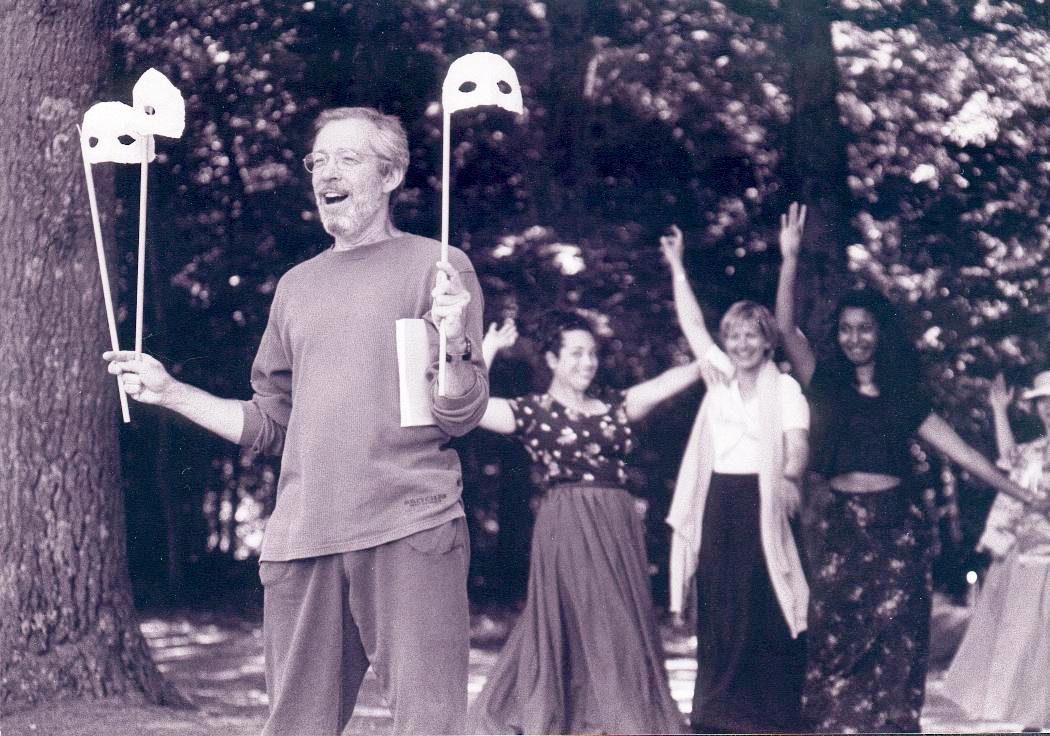 Once upon a time, Dennis Krausnick, who died last year at the age of 76, was a small, not very happy boy who lived in Nebraska and Iowa farm country knowing he could not stay. One of his poems reads as follows:

I strain up the wall of the curb.

Above my fuzzy head.

I scrape with my beak,

Try to stretch on feet and flop

When I want to walk.

I should be in some other element.”

By the age of 19, he had used hard work, mind power, and will power to reach another element. He left for St. Louis to study with the Society of Jesus which appreciated all three of these Dennis Krausnick qualities, and, I suspect, many more. He became a Jesuit priest in the 1970’s, and earned a B.A in Philosophy and Language and an M.A. in French at their institutions. By 1975, he had met Kevin G. Coleman, a fellow Jesuit and actor, who would become Shakespeare & Company’s Tony-nominated Education Director. They traveled to New York for more acting study at New York University, where Krausnick added an M.F.A. in Acting to his credits. At the same time, he met Tina Packer, the future Artistic Director of Shakespeare & Company (who was directing the Shakespeare plays that touched on the Wars of the Roses for NYU); he fell in love with her and was subsequently released from his religious vows. By that time he must have been conscious that he would never again have to collect the eggs from the hen house, seriously risking his mother’s ire if he should drop any.

Living and working at first at The Mount, Edith Wharton’s then nearly derelict mansion in Lenox, Massachusetts, Krausnick and the original Shakespeare & Company group contended with the house’s severe leaks and lack of heat. Packer remembers his courage and organizational skills keeping them together, and getting them through. Apart from surviving, it was extraordinary that the Company moved forward artistically every year.

Krausnick’s vision for developing a great Shakespeare theatre in the Berkshires was rooted in his dedication to training actors. Following Shakespeare’s model, he emphasized asking for and striving to answer the big questions: what is it that makes a human being, and how should a human being engage with the world and with her/his own soul? Over years, he devised and refined several intensive acting courses, a summer institute, and specialized workshops. All the while, he was acting and directing plays as well, most recently including a memorable King Lear. He brought his teaching methods to other venues around the country, and taught or mentored more than 5,000 actors and other students around the world. In addition, he adapted and/or wrote more than forty plays based on the works of Edith Wharton and Henry James.

So it was only fitting that on Monday, June 24th, Shakespeare & Company hosted a Celebration of the Life of Dennis Krausnick on its entire Walker Street Campus (to which the Company had moved in the 1990’s) from one o’clock in the afternoon through early evening. The special memorial program began with family and colleague remembrances interspersed with lines from plays and poems particularly well-loved and delivered by Krausnick during his lifetime. There were excerpts from Lear said by John Douglas Thompson, the roles of the Old Clown done by Allyn Burrows, Polonius by Andrew Borthwick-Leslie, Henry James by Michael Toomey, and others. People from across the country and all over the world laughed, cried, ate, drank coffee, milled about, bought copies of his newly published poetry book, White Flash, and talked about the Dennis Krausnick they knew. There were even two young men from the Marshall Islands, beneficiaries of the Dennis Krausnick Fellowship Fund who had never met Krausnick but were there on scholarship to learn from his acting wisdom.

A little after 3 p.m. the crowd moved to the Elayne P. Bernstein Theatre to enjoy a video tribute to Krausnick produced by McConnia Chesser and Ted Marcus. There were displays of Krausnick’s costumes from various productions recreated by Govanne Lohbauer and the costume shop staff, and several people remarked that it was surprising when walking among them to realize that Krausnick was not ten feet tall as he appeared in their imaginations! In Studio 2, Ariel Bock produced and Normi Noel directed Lydia Barnett-Mulligan, Rory Hammond, Jennie Jadow, Karen Lee, Corinna May, Daniel Osman, Diane Prusha and Tod Randolph in Krausnick’s witty adaptation of Edith Wharton’s sly Xingu.In Studio 3, people enjoyed Krausnick’s own reading of his poetry, a sound installation designed by Natalie Johnsonius Neubert.

People trooped back up the hill for afternoon tea, including baked delights by Judy Turtz and her team. And finally, there was a deeply affecting planting of a donated white Dogwood tree at the bottom of the garden, accompanied by poetry and song. Tina Packer chose the perfectly proportioned Dogwood for its profusion of flowers in spring and its deep red fall color. Guests seemed reluctant to leave, but eventually an early summer twilight covered everything.

“When to the sessions of sweet silent thought

I summon up remembrance of things past,

And with old woes new wait my dear time’s waste:

Then can I drown an eye, unus’d to flow,

And moan th’ expense of many a vanish’d sight;

Then can I grieve at grievances forgone,

And heavily from woe to woe tell o’er

Which I new pay as if not paid before.

But if the while I think on thee, dear friend,

All losses are restor’d, and sorrows end.”

The Dennis Krausnick Fellowship Fund was founded by Dennis Krausnick in 2018 to provide scholarships for under-represented people of color to become Shakespeare actors, as well as resources for promising artists of color to become teachers of the Company’s work. The Fund may also be used to support artists from war torn countries to participate in Shakespeare & Company’s Center for Actor Training programs. People may contribute by contacting shakespeare.org/actor-training.