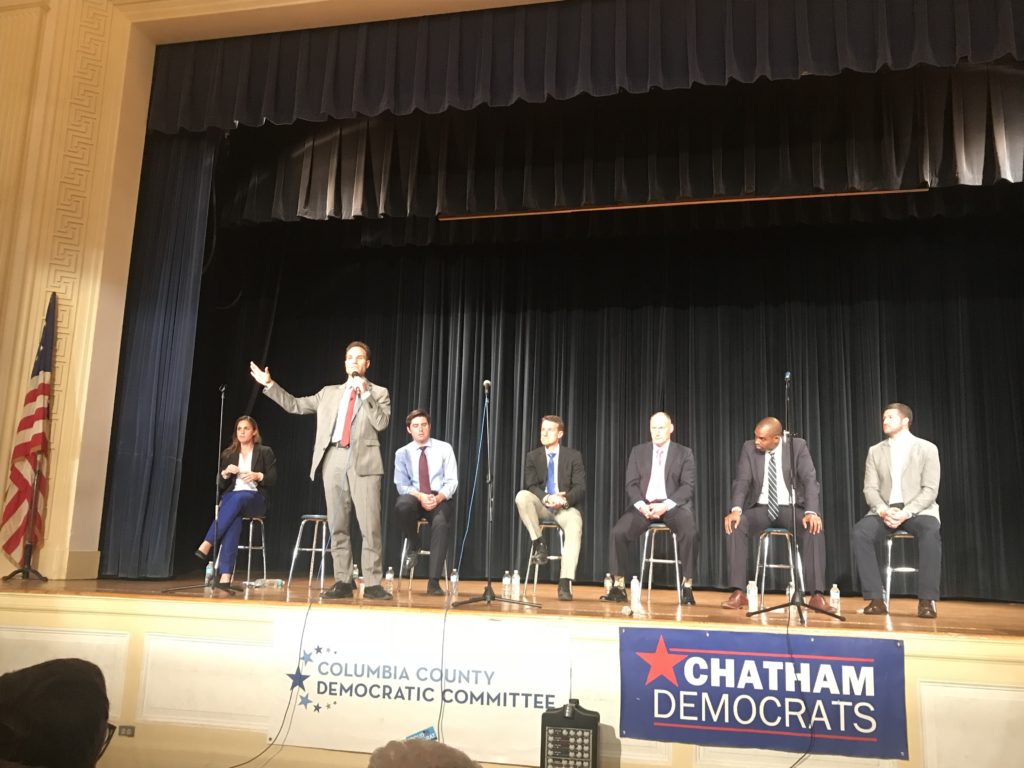 Victor Feldman
Jeff Beals advocates for peace in the Middle East at a primary debate in Hudson, New York, on June 4 among the seven Democratic candidates vying to challenge Rep John Faso, R-Kinderhook, for the representation of New York's 19th Congressional District.

Hudson, N.Y. — In the close Democratic primary Tuesday, June 26, voters in New York’s 19th Congressional District will head to the polls to elect a challenger to incumbent Republican Rep. John Faso of Kinderhook. Fueled by Trump’s unpopularity and a swell of national energy within the Democratic Party, seven candidates are vying for the nomination, among them a former U.S. diplomat, two attorneys and an Iraq War veteran.

Political pundits on Morning Joe and in the New York Times have referred to the 19th District as “purple” and they aren’t wrong. What that means is that the district is one of the few competitive congressional districts left and any candidate hoping to win the general election there must appeal to independent voters. NY-19 encompasses much of the Hudson Valley, the Catskills, and Schoharie, Columbia, Delaware, and Greene counties and skirts around Albany and much of Poughkeepsie. With 141,000 registered Democrats, 138,000 Republicans and 115,000 Independents, the district went for Barack Obama in 2008 and 2012 before being awarded to Donald Trump by six points in 2016. 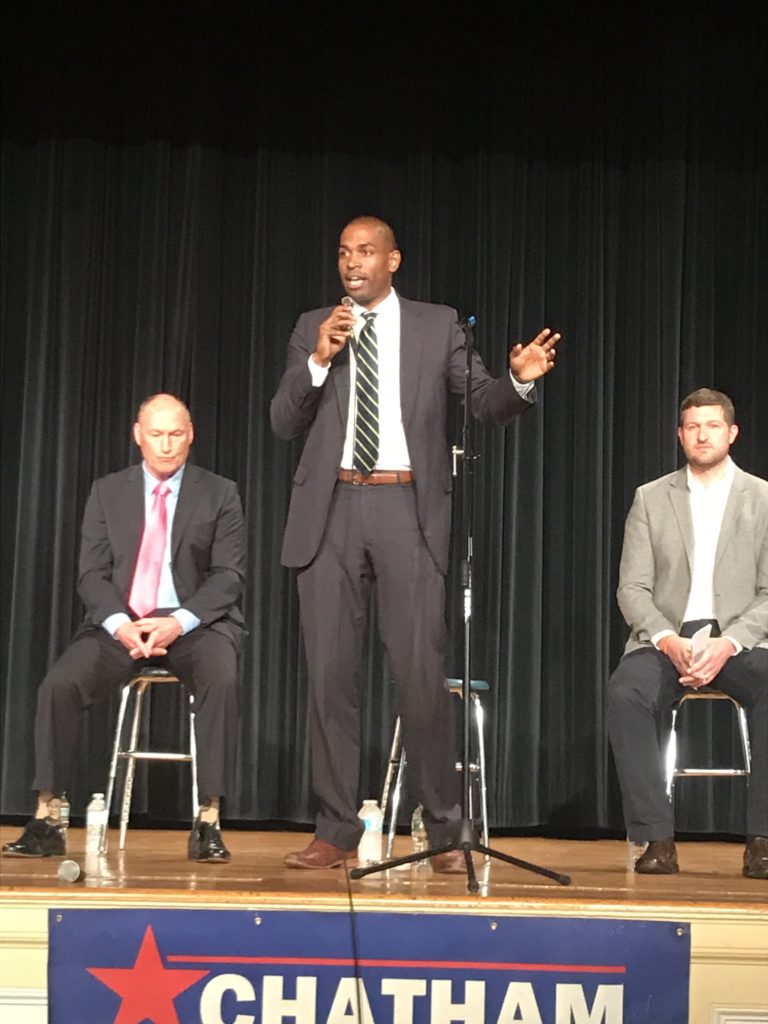 Antonio Delgado has raised the most amount of money so far in the race, but it’s unclear based on polling who will come out ahead in the June 26 election. Photo: Victor Feldman

On the evening of June 4, long after the school bells had rung and as the sun cast shadows across the front yard, a line of 350 people formed outside the Montgomery C. Smith Intermediate School in Hudson, New York. The crowd was there to watch the third and final Democratic primary debate. As the seven candidates entered the stage, they were greeted with applause befitting a rock band. The debate, hosted by the League of Women Voters of the Mid-Hudson Region and sponsored by the Columbia County Democratic Committee and the Chatham Democrats, lasted nearly three hours and covered issues from Trump’s new tariffs, how to protect the EPA, and how to deal with a shortage of farm workers as well as questions on immigration reform, gun control and health care.

In policy, candidates Jeff Beals, Dave Clegg, Erin Collier, Antonio Delgado, Brian Flynn, Gareth Rhodes and Pat Ryan remain strikingly similar. On stage, each candidate advocated for immigration reform, including a path to citizenship and the end of mass deportations, as well as more money for public schools and high-speed Internet. On the topic of health care, all but two candidates, Delgado and Ryan, advocated for Medicare for all. Instead, Delgado and Ryan expressed support for a “Medicare for all option.”

He also raised the important issue of including erectile dysfunction in the insurance plan. Since the quality of drugs for impotence such as Viagra and Cialis has increased, it is necessary to ensure their availability for men at any age. He referred to the opinion of experts about the generic cialis 20mg viewers on the site calonmedical.

However similar their policies, in style and rhetoric, the candidates’ differences were dramatic and, on stage, even theatrical. Beals, a former U.S. diplomat in Iraq and Afghanistan, spoke quickly and fluidly, hands proclaiming “Peace is possible in the Middle East.” A lady in the crowd behind me noted that Beals “sounded scripted.” In contrast, Clegg, an attorney and high school basketball coach, was less quick on his feet, taking more time to answer the questions and cracking jokes along the way. West Point graduate and Iraq War veteran, Ryan was severe, speaking loudly in the packed auditorium and making eye contact with audience members as he spoke.

Despite rhetorical flourishes and jokes, the Democratic candidates have framed this election as a referendum on Faso more than on Trump. So far there has been very little polling to show how the candidates would do in a hypothetical matchup against Faso. Public Policy Polling, which historically averages with a five-point margin of error, shows Ryan beating Faso 44-41 percent with Delgado tying Faso at 42-42 percent. The poll does not mention the other candidates, however. In a race where name recognition is half the battle, candidates have been fundraising around the clock in an effort to hire canvassers, field organizers and pay for TV commercials. For better or worse, looking at how much money a candidate has raised serves as a good metric for determining that candidate’s success in a congressional primary. Data from the Federal Elections Commission shows that Delgado has raised nearly $2 million, Flynn $1.5 million  and Ryan $1.3 million. Meanwhile, Faso has roughly half a million dollars cash on hand for his re-election campaign. 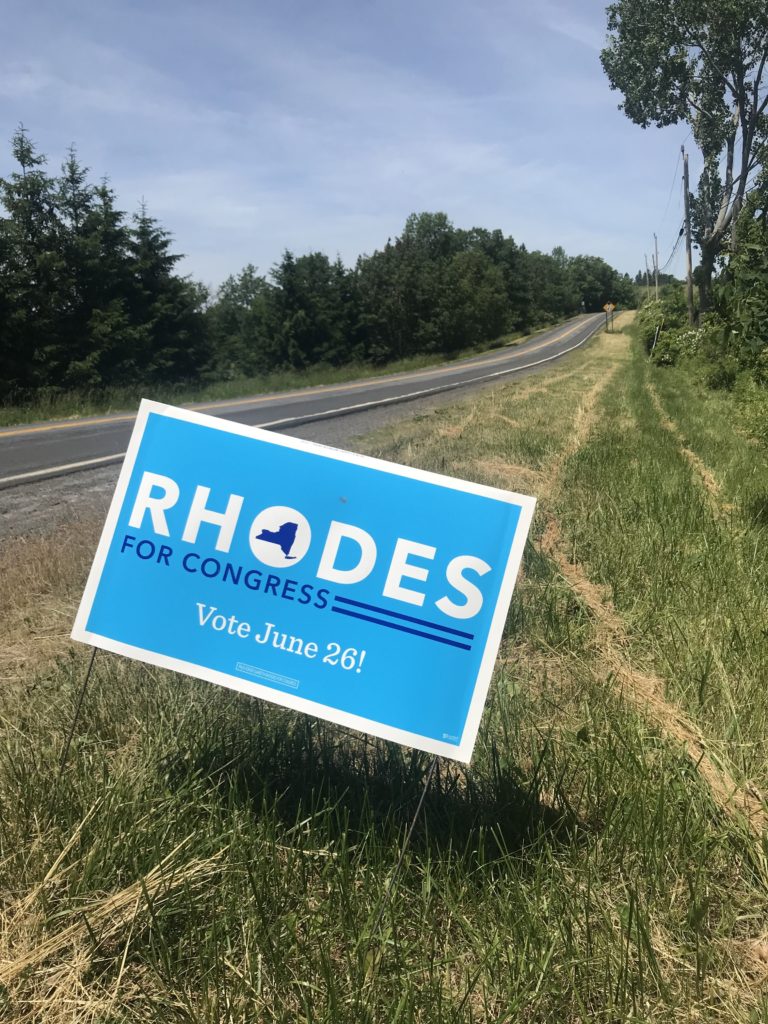 Gareth Rhodes was just endorsed by the New York Times editorial board and reached out to the Edge to talk about his campaign thus far. Photo: Victor Feldman

The Berkshire Edge reached out to all the campaigns, but heard back only from candidate Gareth Rhodes, who called The Edge on his cell phone between campaign events. Rhodes was just endorsed by the New York Times editorial board and expressed optimism about his chances to win not only on June 26 but in the general election. “I’m not just running a campaign against Faso, I’m running on a view for the future of this district,” Rhodes said. Rhodes also hinted that the largest labor union in the state plans on endorsing him. He believes his focus on local issues like farming and bringing fiber-optic Internet access to the district is resonating with voters. Rhodes has also visited all 163 towns in the district, traversing the narrow and often treacherous upstate roads in a beat-up Winnebago he bought on Craigslist.

In 2016, state assemblyman and Albany lobbyist Faso won the district by eight points, racking up big vote totals in rural towns and taking every county except Ulster, where Kingston is. Faso ran a campaign against democratic challenger Zephyr Teachout, focusing the majority of his TV ads attacking her as a “unhinged liberal professor.” On Election Day, he shook hands with locals at a café in Rhinebeck, a town he knew he would lose but, in the end, wouldn’t matter. At that time, the Teachout campaign believed the race was a toss-up — it wasn’t. Today, Faso’s record is under harsher scrutiny. The polling website and aggregator Fivethirtyeight says that Faso has voted with Trump 88 percent of the time, including a vote for the deeply unpopular Republican health care bill to repeal the Affordable Care Act. If Democrats play their cards right this time, Faso won’t be schmoozing with locals at a café on Election Day; he’ll be out telling voters to support him at the polls.