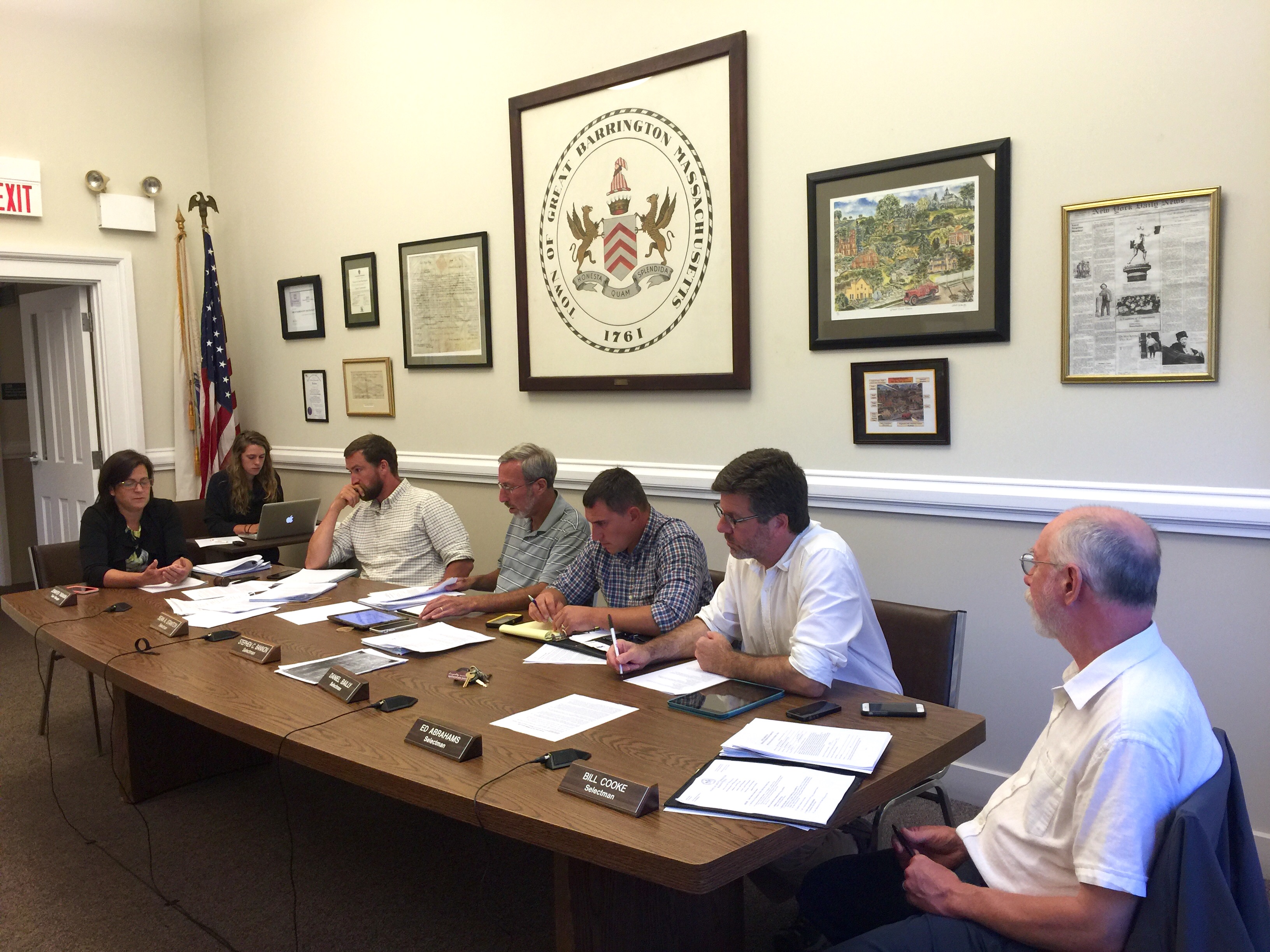 The Great Barrington Selectboard Monday announced a settlement agreement for two phases of a Housatonic Waterworks rate hike that would lessen the brunt of a negotiated increase of 30 percent over two years. Photo: Heather Bellow

Great Barrington — Water bills in Housatonic will rise, but not as steeply as they would have without the intervention of outraged residents, and especially Town Hall.

After returning from an executive, or private, session, the Selectboard Monday (August 22), announced its support of a negotiated draft agreement about Housatonic Water Works Company’s (HWWC) requested water rate hike. HWWC says it needs to raise rates both to help the company pay its bills amid overhead increases and to fund state-mandated improvements to Housatonic’s aging water system that, last month, was found to be leaching unsafe levels of copper and lead.

“Four of 20 customers whose houses were tested for lead and copper had results showing slightly elevated levels of those minerals,” said HWWC President Jim Mercer. “Tests are underway to determine if those elevations were caused by improper sampling, internal plumbing fixtures or water system issues.”

HWWC’s December 2015 request to the Department of Public Utilities (DPU) for a 33.3 percent rate increase alarmed public officials and residents in a village where many already struggle to pay their bills. The increase would have caused the average customer’s monthly water bill to go up 34 percent.

It was enough to make the Town step in with a petition to the DPU, which put its Settlement Intervention Staff (SIS) on the case. After negotiations, this draft agreement by the DPU calls for phasing the increase into two parts: A 19.3 percent increase that would start November 1, 2016 and, one year later, an additional 9.3 percent increase, for a total increase of 30.3 percent. The agreement says that the Phase 2 hike is contingent on the installation of new meters, and “replacement of approximately 1,000 feet of old water mains, 8-inch lines, at two locations in the system.”

Selectboard member Ed Abrahams said he was satisfied with the “happy medium” of an outcome that helps HWWC pay its bills and bring better water to residents. “We wanted the lowest rates, and the improvements that would guarantee the quality of the water.” Abrahams, as ever, was a realist about the cost for such improvements. “It would be nice to wave a wand and say it would be free.”

Board Vice Chair Steve Bannon agreed. He said the copper and lead problem “at the last hour” would have shot the rates up even farther and that there are “enough capital improvements” to justify the increase.

The DPU will also require a push to straighten out the lead and copper issue. There will be more testing required along with an educational campaign about the dangers of consuming lead. To reduce exposure, HWWC is also required to add piping to its storage tank to reduce state-imposed chlorine requirements that will “improve the aesthetic qualities of the water, and prolong the life of customer owner service lines and fixtures.” This work will likely be completed during Phase 1 but won’t show up on bills until Phase 2.

Mercer said a reduction in chlorine levels should reduce the amount of lead and copper that leach from pipes into the water. He said the company will soon begin an information campaign to address “confusion” and “fear” about water quality. More test results are forthcoming, he added.

HWWC recommends running tap water until it is cold before use, and Mercer said doing so “is not too expensive for the benefits.” He said running it amounts to about $1.65 per month at a rate of two gallons three times per day over 30 days at current rates.

About the negotiated settlement Mercer said while “it was a long process, everyone worked really hard to get the job done in the most equitable manner.”

Board Chair Sean Stanton said that the window for comments to the DPU about the rate increase would reopen before the agency formally approves the settlement agreement, which it must do by Friday, October 14.

Stanton also appeared satisfied with the results of negotiations and noted that the SIS, composed of analysts and attorneys, went through the HWWC’s finances “with a fine tooth comb.”

“They look at everything,” Stanton said. That includes salaries. “It’s a privately held [company] but still a public utility—they’re limited in how much profit they can make. If, through these improvements, they have savings, they don’t automatically get to keep those.”

Stanton said the company is under the microscope, especially now. “The DPU will look at their profits,” he said.