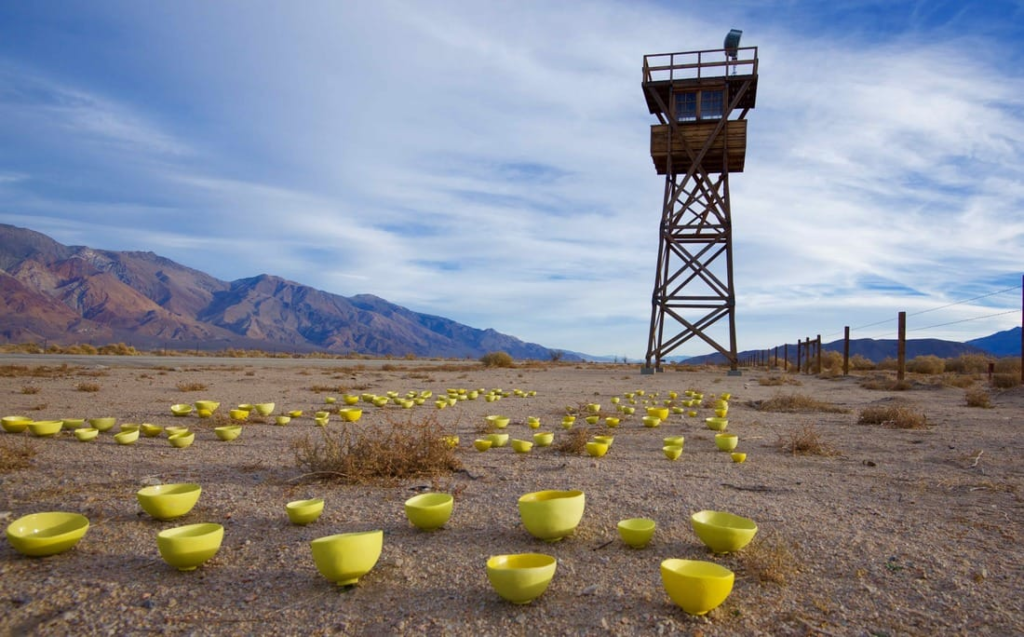 Sandisfield — “If ethnicity and race matter, then we should identify everyone’s,” is the stance being taken by Setsuko Winchester, the Japanese-American journalist whose Freedom From Fear/Yellow Bowl Project aims to diffuse fear, not spread it. “The only thing we have to fear is fear itself,” were the famous words spoken by FDR in his first inaugural address in 1933. The inherent irony — historically and to Winchester’s project — is that this very fear our nation’s president warned against resulted in the forced relocation and incarceration of 120,000 individuals of Japanese ancestry shortly after Imperial Japan’s attack on Pearl Harbor on December 7, 1941 — the plight of whom Winchester considers, “the missing link in the story of race in America.” This fall, myriad venues throughout the county will host Winchester and her project, as a means of facilitating dialogue about what it means to be an American. 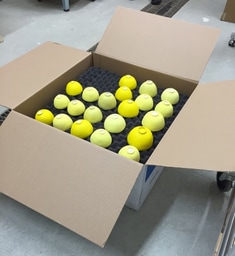 The bowls getting ready to travel. Photo by Setsuko Winchester

The intent of Winchester’s project is to inform and to educate. In 2015, she began a journey to visit what remained of each of the ten camps where Japanese-Americans were unjustly imprisoned during the post-WWII era — camps created by the same person who delivered the iconic Four Freedoms Speech (his 1941 State of the Union Address): President Franklin Delano Roosevelt. Winchester’s original idea — an iteration, of sorts, on the trend of taking a stuffed animal or garden gnome on a tour of fabulous, worldly locales and photographing the journey for the sake of posterity — became somewhat implausible when she considered the reality of her idea: carrying 120 ceramic tea saucers to ten of the most hostile landscapes in America. But she was a success. 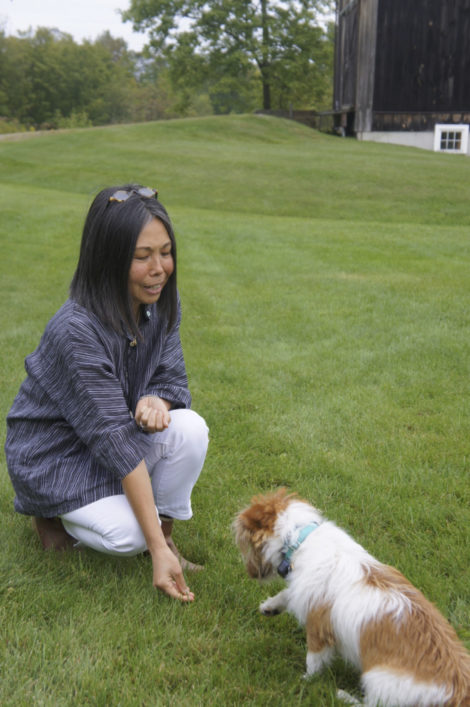 “In my studio in Massachusetts I had hand-pinched and glazed 120 bright yellow tea bowls: yellow, to represent the ‘Yellow Peril,’ as Asians were euphemistically referred to at the time, and tea bowls, to represent man’s humanity. My plan was to photograph arrangements of these bowls in each camp,” a task which, more than 16,000 miles later, was a success. Winchester describes her travels, and the inherent obstacles: “Like the story itself, the camps seemed to have vanished into the dust of history…However, a good map, and specialist guides found on the Internet, suggested a route. We would visit the remains of the southern camps in the late winter of 2015, and the northern camps in the spring of 2016. Accordingly, along with my husband and two boxes containing the 120 fragile but very well packed bowls, we set out…” The rest, well, is history.

“The whole point is to be underwhelming,” says Winchester of her project, one she identifies not as a ceramics project, a photography project or an online project, rather a conceptual art project that — through a contemporary meme — she could look at and examine the society in which we live. At present, Winchester’s yellow bowls are at The Mount, in Lenox; in the ensuing months since the project’s installation, the artist trusts that her work has gone largely unmolested by visitors and passersby. She imagines, however, that in all reality the bowls have disappeared a bit into the proverbial fabric of the woods — whether covered by leaves, filled with debris, or toppled by animals — in the largely parallel fashion that the story of Asian Americans has been all but eradicated from American history. “If [the yellow bowls] disappeared into the earth it would be symbolic of what happened to these people who were forgotten and erased in America’s history,” Winchester says with great passion while gesticulating wildly. But she is not force-feeding others her message.

“Asian discrimination continues because it was legal — passed by an Act of Congress — it was the law to discriminate,” she explains. Which segues to another of Winchester’s goals: to correct the terminology. Japanese-Americans, even those who were as little as 1/16 Japanese, were detained in concentration camps — not internment camps — and the difference is more than semantics. By definition, interment is the legal incarceration of foreign nationals during times of war. Conversely, Japanese-Americans were — to use the proper terminology — held in concentration camps, defined as a place where large numbers of people, especially members of persecuted minorities, are deliberately imprisoned in a relatively small area with inadequate facilities. Of course the term, most closely associated with the camps set up by Nazis in Germany during the Holocaust, would have been far more controversial — albeit honest — had it been used. 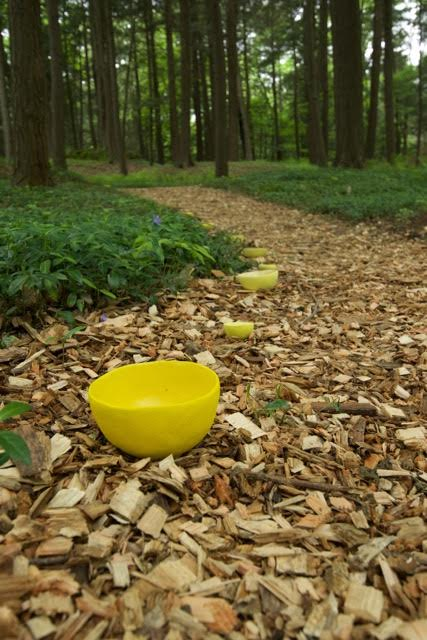 Herein lies the motivation for Winchester’s decision to educate others. Unlike the mass extermination of more than 6 million Jews during the Holocaust, the imprisonment of Asian Americans — quite conversely — was “kept a secret — no one knew about Crystal City [Texas],” Winchester says in reference to one of the primary confinement facilities in the United States during WWII. These camps — ten in all — were described at the time as an “internal security” measure, are now considered to have been “unjust and motivated by racism rather than real military necessity,” as reported by the Commission on Wartime Relocation and Internment of Civilians.

This fall, opportunities abound not only to see Winchester’s Yellow Bowl Project in person (part of Nexus, an outdoor exhibition featuring 30 sculptures at The Mount through October 31st) but also to hear her speak. This Sunday, September 10, Setsuko Winchester will take part in a panel discussion at the Berkshire Museum in Pittsfield where she plans to ask the question “Who’s an American?” The event, entitled Asian-Americans: No More Perpetual Foreigners, will take place at 2 p.m. and is free and open to the public. On Friday, September 15th at 7 p.m., at the Diana Felber Gallery in West Stockbridge, Multicultural Bridge presents a unique conversation between Setsuko and Simon Winchester; 15 of her photographs are on exhibit at the Sandisfield Arts Center through September 30th, and they will move to Gallery 51 in North Adams at the end of September. Finally, photos from the Freedom from Fear/Yellow Bowl Project will be part of the Photography Exhibition for the 75th Anniversary of FDR’s signing of Executive Order 9066 at the FDR Library and Museum in Hyde Park, N.Y., through December 31, 2017.

“I wanted the viewer to get to know my tea bowls and by extension to become curious to know where they went and why. Perhaps by exposing these places of ‘fear’ we can finally exorcise the shame and guilt, and move forward rather than blame the victim or shame the oppressors. In other words, I hope we will always remember and try to forgive. My project may throw light on a discomfiting part of American history – but I hope not to condemn or blame, but help gauge where we are in this ever-evolving experiment we call “America.”