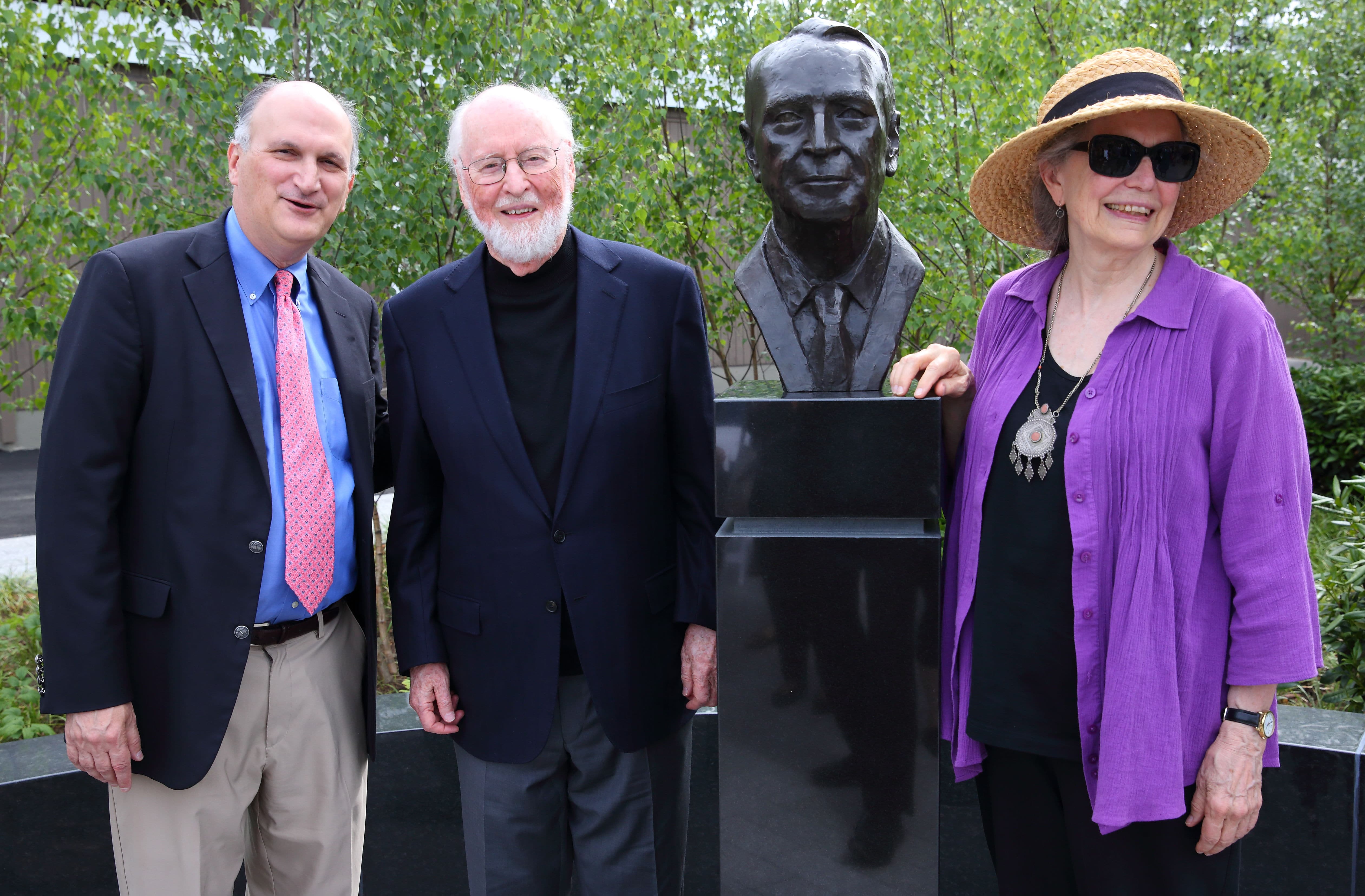 Lenox — Boston Pops laureate conductor and Tanglewood artist-in-residence John Williams thought it would be nice to have busts of the best: that is, likenesses, on the Tanglewood grounds, of the festival’s most icon-worthy music figures. So he commissioned sculptor Penelope Jencks to create busts of the top three: Aaron Copland, Leonard Bernstein and Tanglewood’s founder, Serge Koussevitzky. On the afternoon of June 24, Mr. Williams and Ms. Jencks were both on hand to unveil the series’ third and final sculpture, which stands in its permanent spot at Tanglewood’s newly designed Main Gate.

But first things first: It is customary to give speeches before unveiling an illustrious person’s likeness. And so Boston Symphony Orchestra president and CEO Mark Volpe delivered a few opening remarks before turning the microphone over to BSO principal bass Edwin Barker, who gave a brief account of Koussevitzky’s legacy as a double bassist. Barker then performed the beloved conductor’s double bass recital piece “Chanson Triste,” followed by the first movement of Paul Hindemith’s “Sonata for Double Bass and Piano.” Deborah Emory’s sparkling piano accompaniment was spot-on. BSO bassists Lawrence Wolfe, Benjamin Levy and Todd Seeber then joined Barker on J.S. Bach’s Saraband from Suite No. 6 in D for solo cello, BWV 1012, arranged by Gunther Schuller for four basses.

Now it was time for John Williams to take a turn at the microphone, tell his side of the commissioning story and cut to the chase. Before you could say “John’s your uncle,” Mr. Williams had introduced Ms. Jencks to the impatient crowd and yanked on the red ribbon holding the veil in place.

Applause at such a moment may well be de rigueur, but in this case, it was justified and inevitable. If Ms. Jencks’ sculpture merely resembled Koussevitzky, that would be sufficient. But it wonderfully captures the man’s visionary character. It exudes wit and glows with vitality, as though something brilliant is just on the tip of his tongue. The crowd expressed its approval in a chorus of oohs and aahs. Mr. Williams beamed.

Ms. Jencks’ first Tanglewood sculpture, a bust of Aaron Copland, was installed in 2011 in the formal gardens behind the Tappan Manor House. Her 2014 sculpture of Leonard Bernstein is currently on display at the Highwood Manor House.