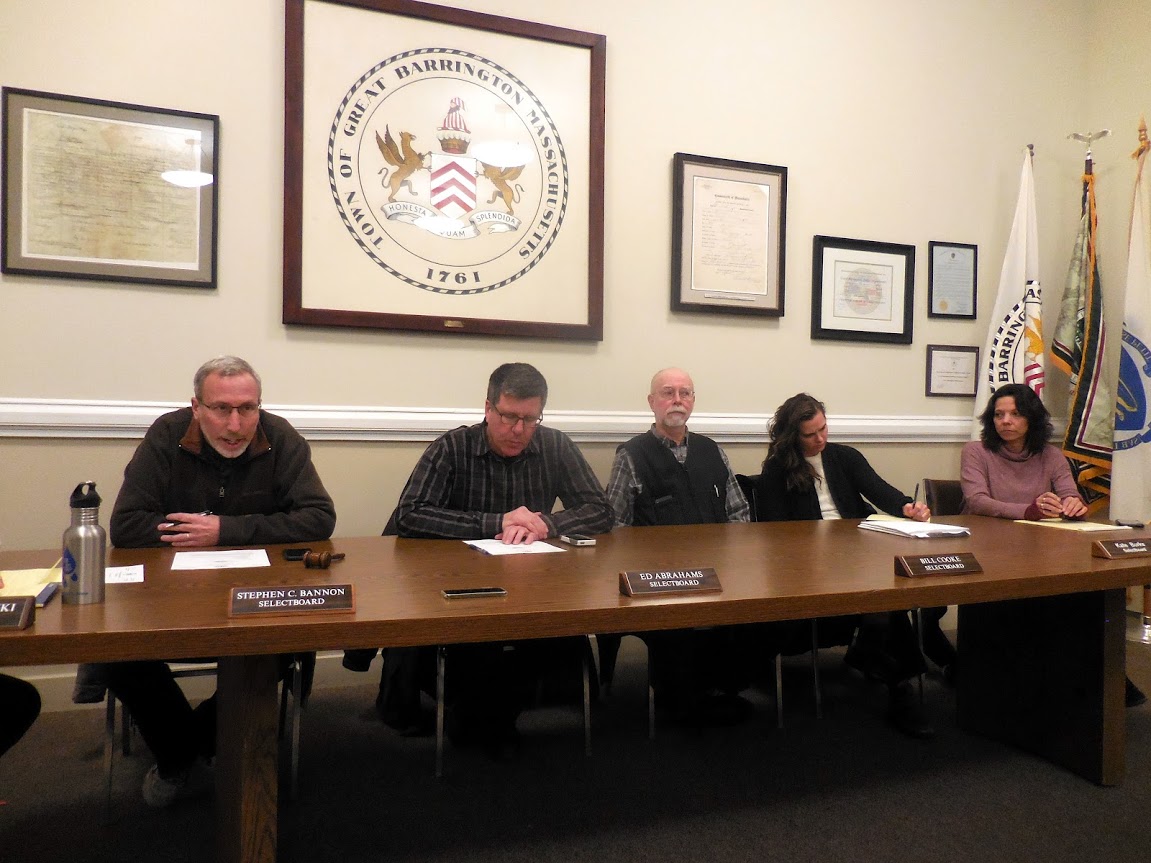 Great Barrington — In this town, cannabis is a subject that evokes both passion and ambivalence. And so it was that the selectboard voted to endorse the concept of limiting the number of marijuana shops in town but not to use the zoning code to further restrict their placement.

After hearing for almost an hour from the 20 or so residents who attended the forum on marijuana topics at Town Hall on Wednesday night, the board voted to restrict the number of shops to seven — the same number of off-premises all-alcoholic beverages licences for package stores permitted in the town — and declined to place further restrictions on the locations of the shops in the downtown area.

See video below of the public held forum held by the selectboard on marijuana-related topics:

The board then directed town manager Mark Pruhenski to prepare a warrant article with the new limits for town residents to vote on in the annual town meeting. Five host community agreements have been signed for retail cannabis operations. But as selctboard Chair Steve Bannon noted, there were four agreements sought in the first year after legalization and only one since then, so it’s not as if there has been a rush lately.

Only one store has opened: Theory Wellness on Stockbridge Road. Another on South Main Street near the Great Barrington Bagel Company recently received its provisional license for a shop that is under construction. It will be known as Rebelle and is a project of Community Growth Partners. A third, Calyx Berkshire Dispensary, also recently received its provisional license and will be located in the former Joe Dagget storefront on Main Street next to Tom’s Toys in the heart of downtown.

Bannon said the matter has taken on an increased urgency because the town was up against deadlines for getting items on the warrant for the annual town meeting set for Monday, May 4. The board itself had not taken a position on the matter.

When Bannon opened the floor to comments from the audience, most seemed to agree that, in addition to placing restrictions on the stores, the larger question remains about what kind of image the tourism-minded town wants to project.

“It’s not about if you’re pro or against marijuana,” said Van Deusenville Road resident Alex Sarbib. “I think it’s more the town itself. What is our town? What does our town look like?”

Division Street resident Michelle Loubert, who is also a member of the town finance committee, is a fierce critic of the plans of Fulcrum Enterprises, since withdrawn, to build a cannabis growing and manufacturing facility on Van Deusenville Road.

Loubert said she recently traveled to Danbury, Connecticut, and was disappointed to learn that people there knew of Great Barrington as “marijuana town” — not as the best small town in America, so deemed by Smithsonian magazine in 2012.

“That broke my heart,” Loubert complained. “Tourism, culture — that’s our brand … We went from number-one town to marijuana town.”

Maggie Bona, who lives on Reed Street, just a stone’s throw away from Rebelle, also co-owns Shire Glass, a cannabis accessories store at 87 Railroad St. She had also proposed to open a retail cannabis store with her partner Matt Meandro at the so-called Flying Church.

But Bona didn’t want a cannabis store in her neighborhood. She was concerned about traffic and the safety of her mother, who has multiple sclerosis and travels on a scooter.

Holly Hamer, who acknowledged she uses medical marijuana, said she regrets that, for too many people, cannabis “seems to be some sort of moral issue” that “affects the town’s reputation.”

Hamer noted that alcohol and cannabis are treated differently in terms of how they may be sold and marketed. And she did not see anything wrong with allowing the cannabis stores downtown.

“Since the ‘80s there have always been industries downtown that don’t belong there,” Hamer said. She said there are currently too many banks, lawyers, accountants and real estate offices, none of which create foot traffic and bring people to town.

Doug Stevenson, a former selectman, was most concerned about siting the cannabis stores downtown. He suggested rezoning the downtown business district “as a distinct separate zone” and placing limits on the number of stores in that zone.

But no one could agree on what constituted downtown, so the board declined to take action. Board member Ed Abrahams said he was concerned that if the stores were zoned out of downtown, there might be more unleased spaces.

“One of the worst things for a downtown’s brand is empty storefronts,” he added.

But board member Leigh Davis said it only made sense to modify the town’s zoning bylaws to discourage cannabis stores from locating downtown.

“One of my biggest fears is having one of these places open next to a place that has lines of children and lines of families,” Davis said. “There are people who have come up to me saying, ‘What are we thinking?'”

But there was also concern that such limits would run the risk of putting the shops closer to residential neighborhoods.

“If we limit where, then we’re pushing them somewhere else,” Abrahams said.

“It’s easy to say, ‘Let’s ban it,’” Bannon added. “Where are we banning it to? So let’s take a deep breath before we do anything today or even this town meeting.”

So the issue of zoning was tabled, but Davis eventually made a motion that she would also like to see the two additional host community agreements yet to be awarded be set aside for people who have been historically marginalized or disproportionately prosecuted for drug use.

Indeed, the state Cannabis Control Commission created the Social Equity Program, the goal of which is to “ensure that people from communities that have been disproportionately harmed by marijuana law enforcement are included in the new legal marijuana industry.”

Board member Kate Burke, who has been very interested in the program, said it has not been very successful, in part because of the barriers to entry. Fast forward in the above video to 1:02:20 to see Burke’s full explanation.

Davis’ motion failed, but the limit to seven cannabis stores passed 4-0 instead of 5-0 because Abrahams had to leave the meeting before the vote.

It is widely assumed that the influx of customers and out-of-state vehicles into the Berkshires will diminish greatly once adult-use marijuana is legalized in Connecticut and New York. Connecticut Gov. Ned Lamont recently announced he would make legalization a priority in the upcoming legislative session in Hartford. In New York, Gov. Andrew Cuomo has vowed to legalize cannabis this year.