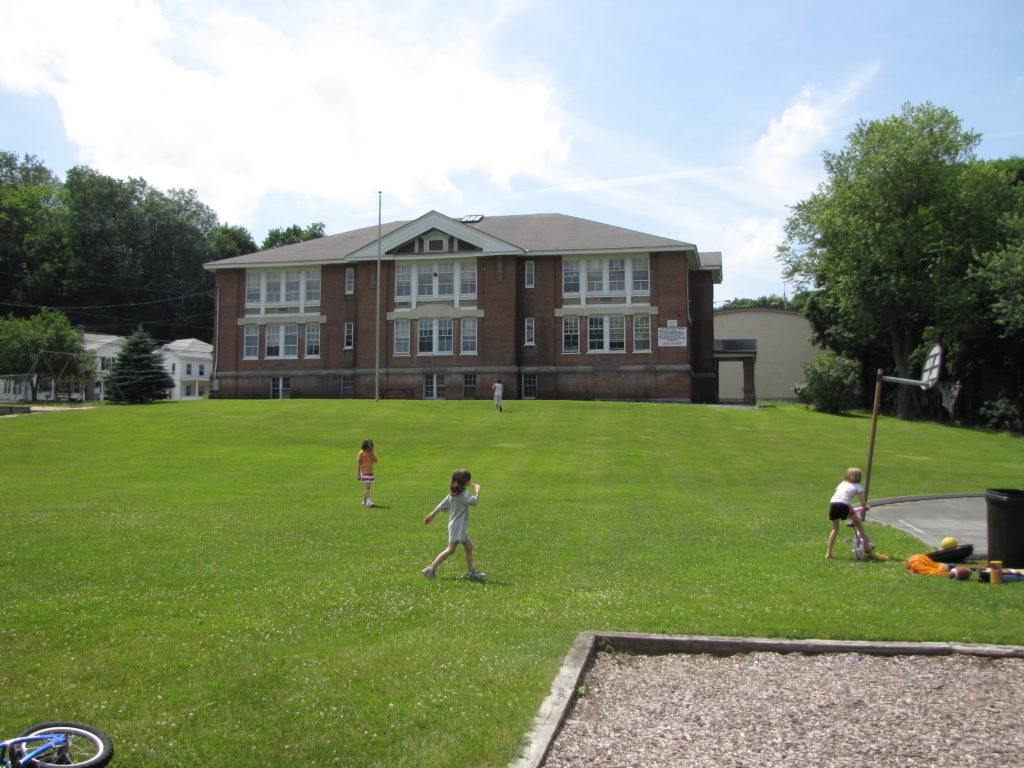 Great Barrington — The redevelopment of the empty Housatonic School is one step closer to becoming a reality, but many questions remain after the selectboard voted unanimously Monday night (August 16) to give town manager Jennifer Tabakin the authority to negotiate with Grayhouse Partners on an agreement for the reuse of the building.

Grayhouse CEO Bill Nappo made a presentation to the board in which he and his team explained the unusual arrangement, dubbed a “public-private partnership” (P3), which is a contractual arrangement between a public agency such as the town and a private sector entity such as Grayhouse. P3s are often used for toll roads but can include projects such as the Housatonic School, said Grayhouse consultant Gregory Fitch of Provident Economic Technologies.

Under the Great Barrington arrangement, as described by Fitch, the town would retain ownership of the building and Grayhouse would lease it from the town.

Grayhouse will have one year to perform what it called “due diligence” on the property. That will include establishing funding sources along with the costs of design, construction and operations.

“A public-private partnership could be a means of addressing the economic and social responsibility aspects of the project,” said Grayhouse financial consultant Gillette Conner. “We want the school to become the heart of the village.”

But, Connor added, “You can’t just do well; you have to do it in an economically viable way. What are the usages and funding streams that make this viable and not be a drain on the tax base of the town?”

Connor then answered her own question: The project would be funded locally through a combination of private equity and lenders, including project-finance debt. In addition, Grayhouse will seek funding through private philanthropy and it could take advantage of historic tax credits, private activity bonds and grants.

“We want to do it well and do it local,” Connor said.

Sent out this spring, the town’s most recent request for proposals elicited only Grayhouse’s. RFPs soliciting potential buyers or others who would want to use the Housatonic School were sent out in 2010 and again in 2012. More than two years ago, the town sent out another RFP but nothing came of it.

Connor emphasized that Grayhouse wanted to preserve the historical character of the building: “We’re planning to maintain the integrity and feel of the building. We’re not going to make it into some big loading dock … We have skin in the game. We want to make this a productive asset.”

As presented, the project would convert the school into seven small apartments and several work spaces on three levels. Connor conceded that parking could be an issue.

The adjacent Housie Dome, which now functions as a community center and contains the former school’s gymnasium, will not be a part of the deal. Nor was the school’s playground, which is now a town park, marketed as part of a potential sale. So in any adaptive reuse of the building, the Housie Dome spots could not be used for parking, though the proposal does add 14 new parking spots on the east side of the building that encroach slightly on the playground.

“This is a fairly flexible site,” explained Grayhouse architect Steve McAlister. “There are lots of things it can be used for, so we are not necessarily constrained to what we are showing here.”

Connor said Grayhouse would produce timely communication and provide the selectmen with monthly progress reports on the project and “what happens in due diligence process.”

In its response to the RFP, Grayhouse, which is based in Housatonic, says interested commercial tenants include software executive Jeffrey Blaugrund, now the owner of Braise Worthy, a food preparation start-up. There was also a letter of support from Berkshire Bank.

In addition, Connor said the group has had conversations with Rep. William “Smitty” Pignatelli and Sen. Adam Hinds and the project has “their early support.” Grayhouse has also met with representatives from the Berkshire Regional Planning Commission. The selectmen were, by and large, pleased enough with the proposal.

“They’re willing to really dig in here,” said Sean Stanton, who chairs the selectboard. “We’d like to see some progress.”

Yet Stanton also cautioned that the town would be assuming some risk and that entering into the partnership with Grayhouse doesn’t come without some expense. He added that, “We’ve had people come in with RFPs and they tell us all these wonderful things they want to do and it turns out they couldn’t do it.”

Furthermore, Stanton said the project would not be without costs to the town since paid town staff would surely be putting in hours as part of the partnership. Still, he acknowledged that, “This is probably our best option.”

“But what if we have nothing after a year?” asked Selectman Dan Bailly, who lives in Housatonic and has taken an active interest in the fate of the school. “We will have lost all that time.”

Fitch countered that, even if the project never gets off the ground, town officials will be far “better educated” about the building and about the value of P3s.

Before becoming a selectman in 2013, Bailly was on one of the task forces charged with recommending options for reuse of the school. Those options, presented to the selectboard in August 2011, were to use the building through a public-private partnership, turn it into a town community center, or tear it down and replace it with a larger park. Bailly has said, however, that surveys consistently found that Housatonic residents did not want the building to be used for housing.

“We’ve put out a detailed RFP and this is the only one we got,” said Selectman Steve Bannon. “They are only proposing due diligence at this point. This is a time-invested plan that hopefully will bear some fruit … We could put out another RFP but how did that work out?”

“If we had another option then this would be a harder decision,” said Selectman Ed Abrahams.

Bailly remained skeptical about the project because of the lack of specifics but conceded there are currently no better options. Bannon said if there was no housing in the proposal, then the school might have to be demolished.

In the end, the selectmen voted without dissent to authorize Tabakin to negotiate a memorandum of understanding with Grayhouse that establishes the parameters of the relationship and report back to the board within 30 days.