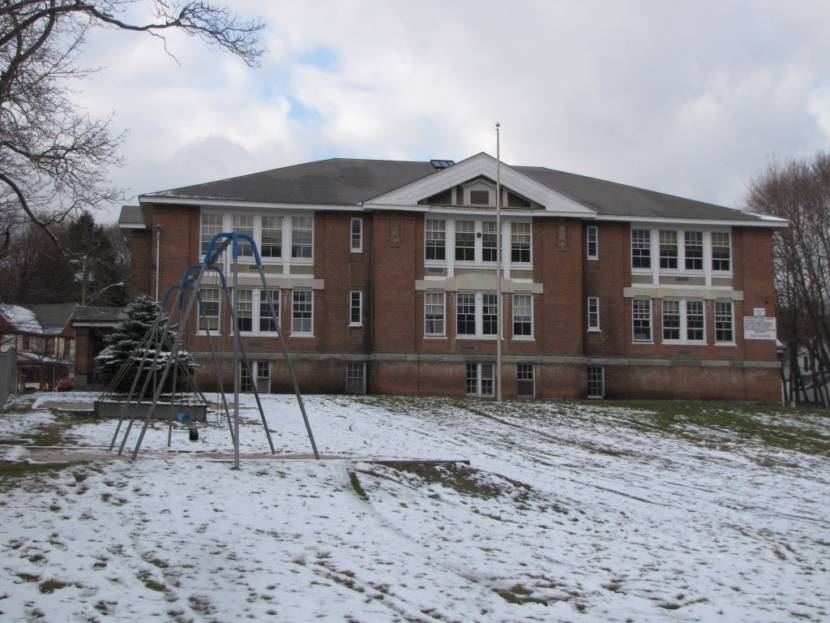 David Scribner
The Great Barrington Selectboard this week peppered representatives from Grayhouse Partners with questions about the proposed reuse of the empty Housatonic School, seen above.

Editor’s note: A link to the Grayhouse Partners report to the selectmen on Housatonic School was omitted from the story. Click here to see the report.

Great Barrington — It remains to be seen whether the empty and decaying Housatonic School can be saved. 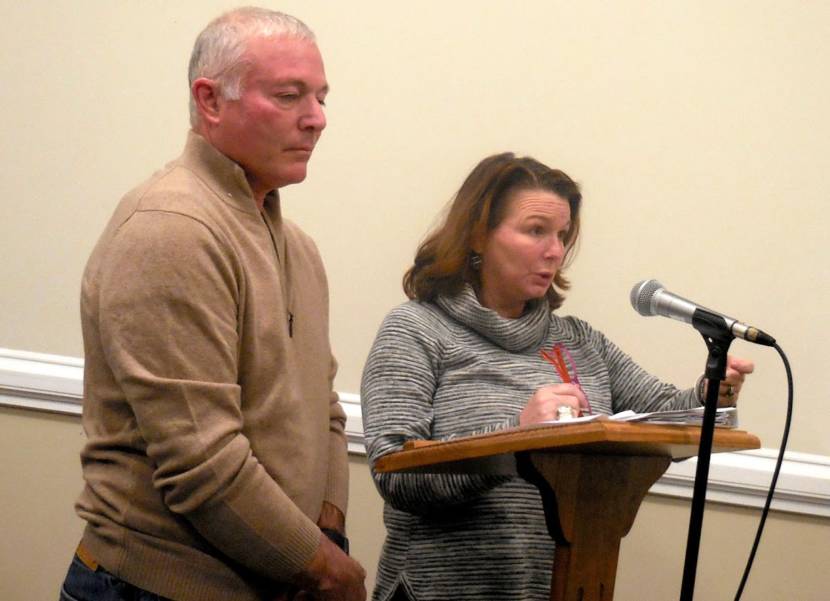 Bill Nappo and Gillette Conner of Grayhouse Partners explain the inexact science of applying for grants at a Feb. 25 meeting of the Great Barrington Selectboard. Photo: Terry Cowgill

Grayhouse Partners, the developer with a proposal for the town-owned building, remains optimistic but the selectmen have grown skeptical at the slow pace of the business plan, the lack of funding and the absence of a budget for the project. At Grayhouse’s request, the board gave Grayhouse a six-month extension.

Grayhouse CEO Bill Nappo and his business partner Gillette Conner submitted an update and told the selectboard at its Feb. 25 meeting that they’re making progress on obtaining the grants necessary to make their plan a reality.

Grayhouse had sought $650,000 from the town Community Preservation Committee but was awarded $300,000, subject to approval at the annual town meeting in May. And it’s applying for additional grants from MassDevelopment and the U.S. Department of Agriculture. The latter might match the grant that would come from the CPA, Nappo said. 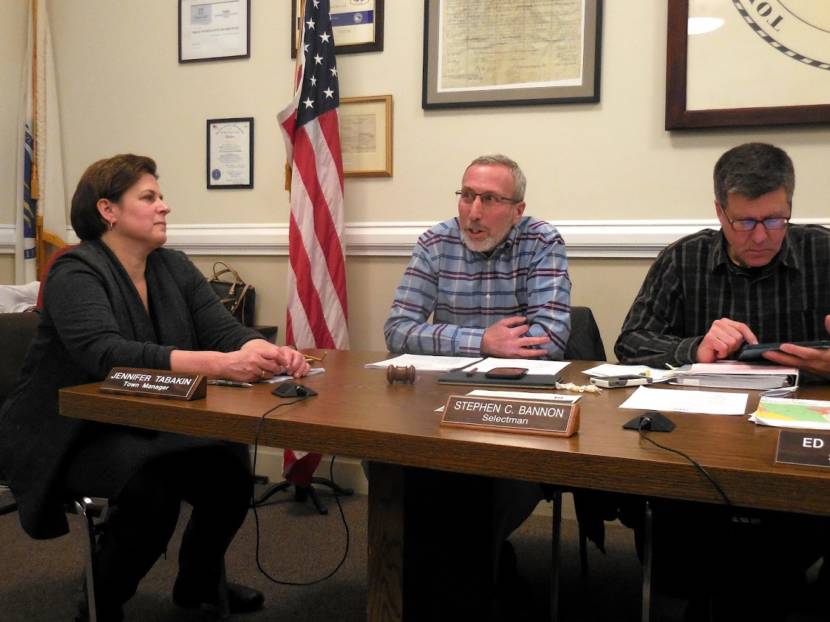 A frustrated Great Barrington Selectboard Chairman Steve Bannon, center, asks representatives from Grayhouse Partners about the progress of their proposal for the reuse of the former Housatonic School at a Feb. 25 selectboard meeting. To his right is town manager Jennifer Tabakin and to his left is Selectman Ed Abrahams. Photo: Terry Cowgill

The project was not approved for MassDevelopment funding last year but Nappo said it is common for projects to fail in the first round and gain approval in later stages. Nor has Grayhouse yet secured any tenants.

See video below of a discussion between Grayhouse Partners and the selectboard concerning the redevelopment of the Housatonic School:

“How much is this going to cost the town to complete? The whole project?” asked Selectman Ed Abrahams, reviewing the report. “I didn’t see that anywhere in here … We also don’t know the ongoing costs once the project is complete.”

“I think we’re at about $5 million for the project,” Nappo replied. “We don’t have a complete budget as of today.”

Conner explained that much of the time since the first presentation on the proposal in December 2017 has been spent identifying potential sources of funding and that CPA funding is “the first domino to fall.” CPA funding would be seen by other funding sources as a vote of confidence from the town. Furthermore, grant timelines don’t always line up with the needs of developers and their partners. 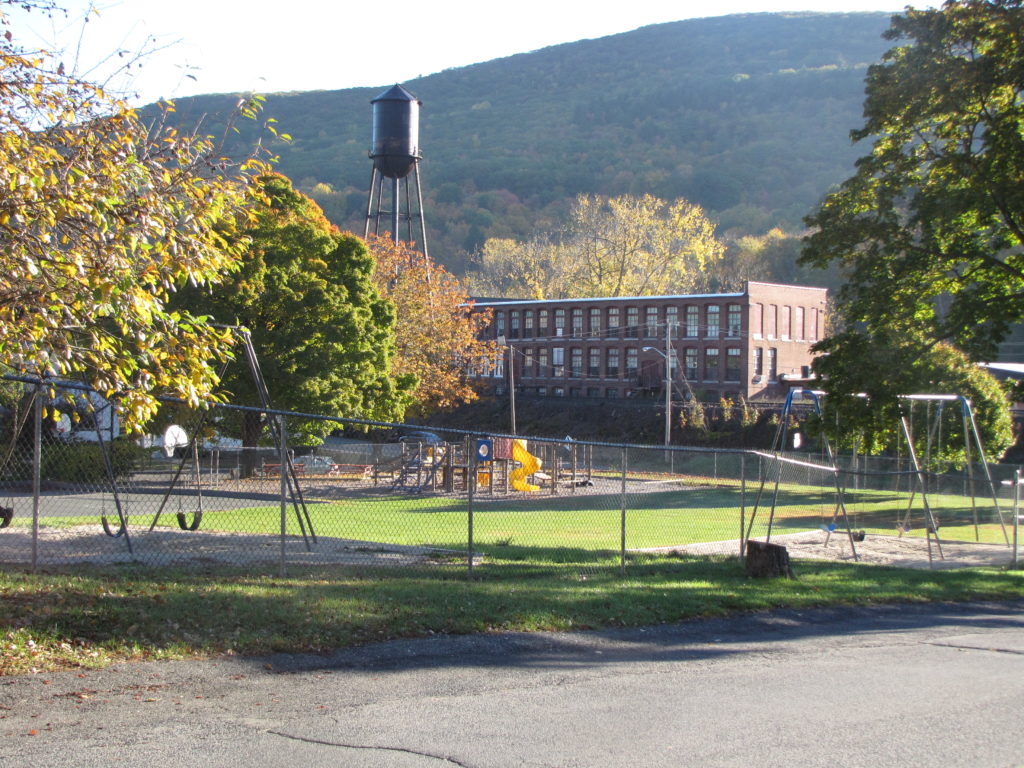 The playground area of the Housatonic School, looking east toward the Monument Mills and Flag Rock. Photo: David Scribner

The plan, the only one the town has so far received after several requests for proposals, calls for an adaptive reuse of the vacant 110-year-old school on Pleasant Street near the center of the Housatonic section of Great Barrington. Grayhouse would sign a lease agreement with the town for 40 years with the option to terminate it with 180 days notice.

The proposal originally called for a mixed use of the building that included a combination of housing and work space. The emphasis now is on commerce, nonprofits and so-called business incubator spaces, and collaborative workspaces for technology and business. A small amount of housing on the upper floors is a possibility.

A priority, Nappo said, is bringing fiber-optic broadband internet service to the building in order to make it more attractive to businesses. That’s one of the purposes of the USDA grant application, along with the possibility of exterior restorations. The USDA application was slowed by the recent federal government shutdown, Nappo said. 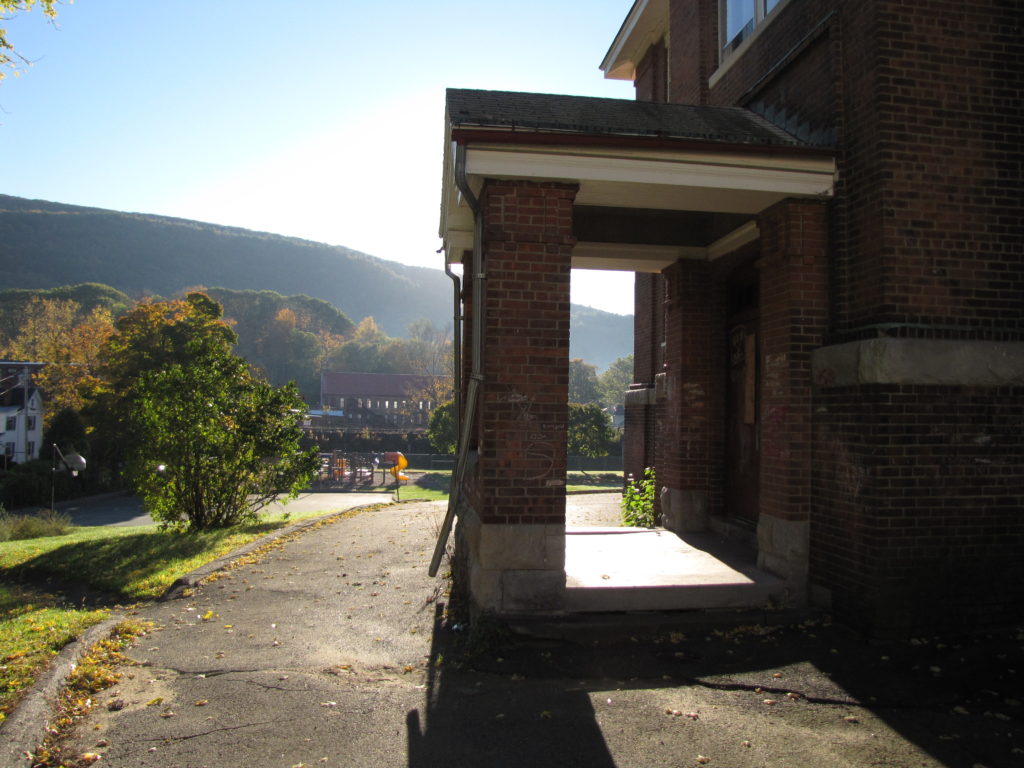 Also, bringing a natural gas line in to serve the village would make it more attractive to potential tenants. But Nappo said his architect told him extending a line from Berkshire Gas to Housatonic would likely be a $2 million to $3 million job.

Fiber is hard to come by in Housatonic and its scarcity is viewed as an impediment to the economic redevelopment of the village and the repurposing the mostly empty mills that dominate the downtown landscape.

“What we’re doing is putting our ducks in a row—the USDA application, CPA funding and the MassDevelopment grant,” Nappo explained. “We’re moving slowly because it takes time.”

As far as lining up tenants, Nappo and Conner have been having discussions with several interested parties. The only one they have named is Community Health Programs, the Great Barrington-based healthcare provider. Nappo said they expect to meet with representatives from CHP Monday, March 11, about a possible satellite facility. 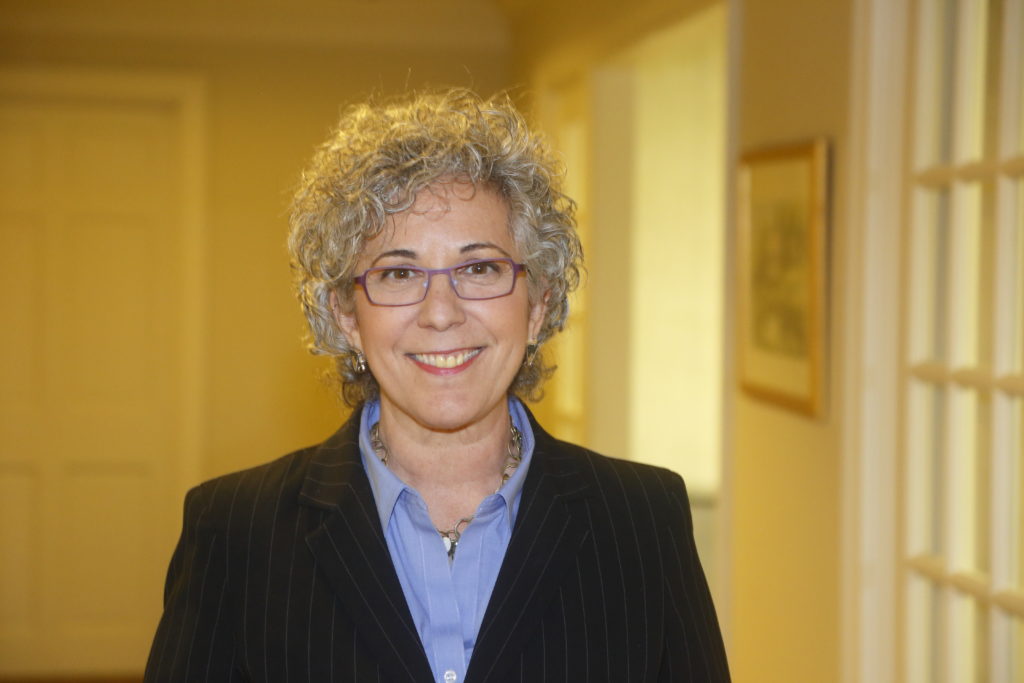 Asked to confirm her organization’s interest in space at Housatonic School, CHP CEO Lia Spiliotes told The Edge: “Obviously, it would be wonderful if the Housatonic School were revived to benefit the community.

“Our CHP headquarters and core Family Service programs will continue to operate at our Stockbridge Road campus. If an opportunity arises to offer a CHP program to the village community, such as a playgroup, we would explore that option. CHP has no contract or other formal agreement for space at the former school.”

The selectmen are wary of putting money into the building lest the Grayhouse proposal falter. The former school has a leaky roof. Temporary plans call for the installation of a tarp until such time as a more permanent solution can be implemented and funded. Officials have said a new roof could cost hundreds of thousands of dollars. Demolition estimates are in the neighborhood of $850,000, largely because of the expense of disposing of hazardous building materials.

Nappo and Conner said, as funding progresses, it will be an easier lift to attract tenants. Nappo added that there has been movement in the village in the area of reuse of space and economic development. With the opening of the Studio for Integrated Craft in the former Country Curtains building and the possibility of the redevelopment of Monument Mills, things are starting to happen in Housatonic, so he and Conner are focusing on spaces for businesses and start-ups rather than affordable housing. 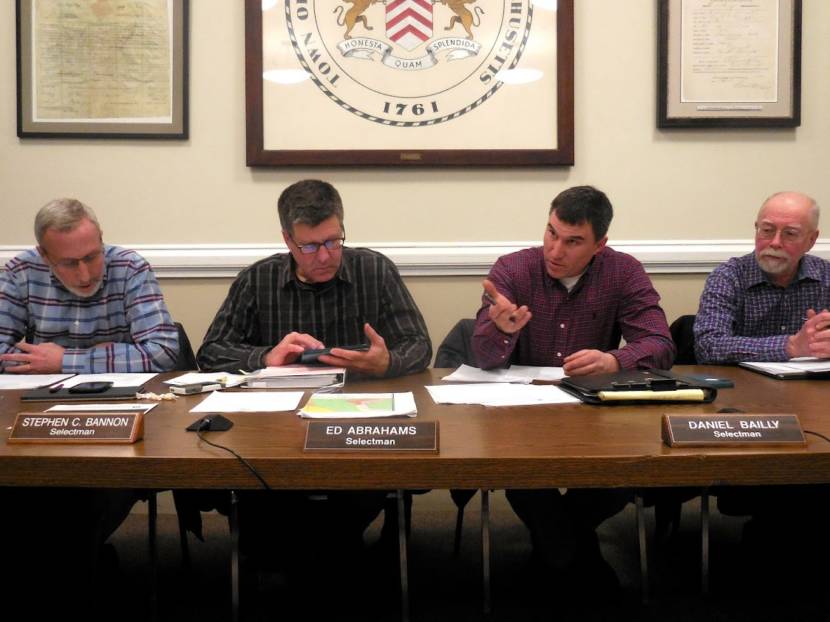 Since it closed, the school has had a controversial history. The Community Development Corporation of South Berkshire in 2013 proposed a mixed-use development that included 11 units of affordable housing, and commercial space including space for nonprofits and even a satellite office for police. But then-town manager Kevin O’Donnell put the kibosh on the proposal after strong community opposition. Click here to read an Edge story looking back at that time.

Selectman Dan Bailly, a building contractor himself who also was a member of the Housatonic School Campus Task Force that surveyed public opinion of the CDC proposal, said he still did not think an all-housing proposal would fly.

“I think it would still be a tough sell, honestly, if it’s straight housing,” Bailly said. “If it’s mixed, you might have less pushback.”

Town manager Jennifer Tabakin defended Grayhouse’s progress, noting that the timing of grant opportunities does not always line up perfectly with expectations and that the alternatives could be worse.

“A lot of people in town care about Housatonic School and want to see it restored and make it into a community asset,” Tabakin said. “If the alternative is not giving an extension to the team, that would be a step towards the scenario of doing nothing to the building, which would also present a cost to the town in eventually demolishing it.”

Tabakin added that she knows of no “inexpensive option and that she “can’t make magic … but I think that the process and the work they’ve done is really solid and I think they have a lot of support for it.”

Bannon said the school will no doubt be the subject of discussion at Monday evening’s town budget public hearing with the finance committee. In the proposed fiscal year 2020 town budget (scroll to page 51) is $650,000 for “Housatonic School improvements.”

Weighing on the minds of the selectmen and some of the audience members, including Christian Hill Road resident Marybeth Merritt, was the town’s history in dealing with surplus properties. 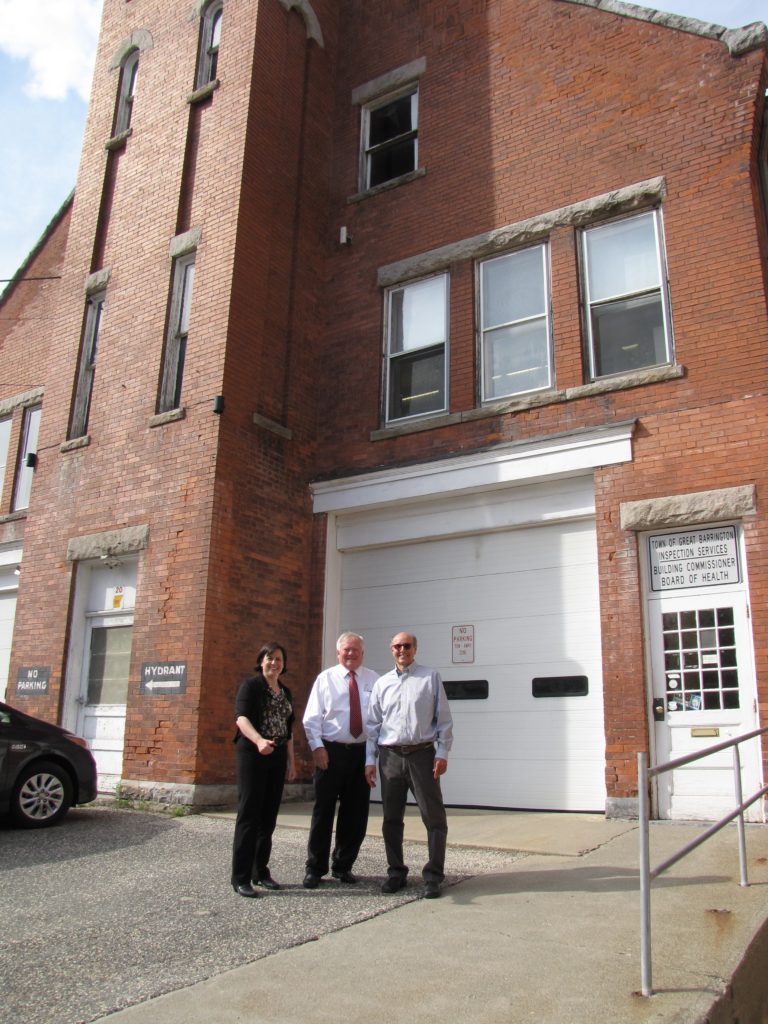 The old Castle Street firehouse, for example, continues to languish after being purchased from the town in 2014 by a retired upstate New York banker who had grand plans that have so far not panned out.

The former Searles Middle School was purchased a few years ago by hoteliers Vijay and Chrystal Mahida, who planned to renovate it into an 88-room hotel and conference center. But aside from some asbestos abatement activity in the interior, the property on Bridge Street has sat largely dormant for two years.

In the case of Housatonic School, Bannon said the difference is the town still owns it and, despite multiple attempts to market it, was unable to find a buyer.

Shuttered by the Berkshire Hills Regional School District, the Housatonic School has a long and checkered history. The former community elementary school opened in 1909 and has remained mostly empty since 2004 when Berkshire Hills consolidated its schools with a new elementary- and middle-school campus on Monument Valley Road.

When the school closed, the town assumed ownership of the property from the school district. Berkshire Hills used the building for its administrative office for a couple of years and then moved to the Stockbridge Town Offices. The nonprofit Multicultural BRIDGE was based in the Housatonic School until 2007, when it moved temporarily to Pittsfield and eventually to Lee.