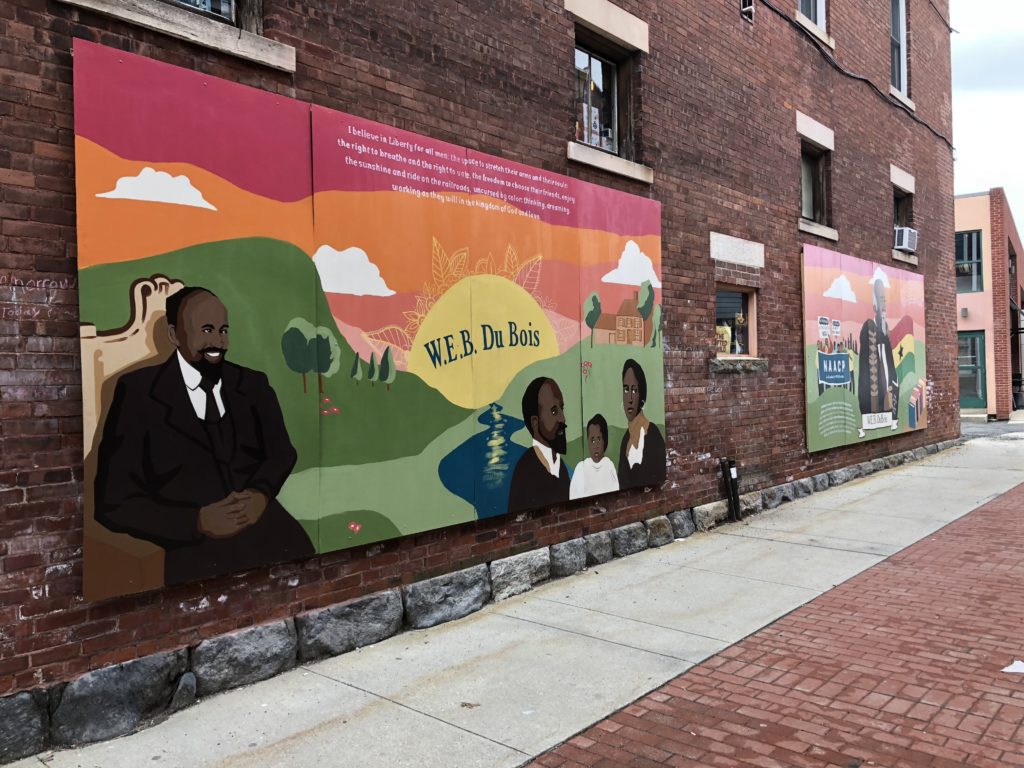 Great Barrington — W.E.B. Du Bois, perhaps Great Barrington’s most famous resident, will have his legacy in the town perpetuated thanks to a newly formed committee that will meet regularly and oversee town events and programs honoring the legendary scholar and African-American civil rights activist.

Last night in Town Hall, the selectboard appointed a roster of members who will comprise the W.E.B. Du Bois Legacy Committee. The selectmen were unsure about what kind of response they would get when they issued their initial call earlier this month for seven volunteers to serve on the panel, but more than a dozen people had responded by the Sept. 19 deadline.

“We always complain when we don’t get enough people applying,” said Selectman Ed Abrahams. “It’s almost as a difficult when we get too many or more applying than we need.”

See video below of the selectboard discussing the W.E.B. Du Bois Legacy Committee:

Abrahams said the town “got a flood of interested people, many of whom have been involved for a while on Du Bois-related activities.” But he did not want to discourage their involvement, so he proposed to expand the committee to include 12 members. Four of them are not Great Barrington residents.

Selectman Dan Bailly wondered why the application of Main Street resident Patrick Fennell to become a member of the committee was not approved. Abrahams said the explanation was really quite simple.

In his letter of application, Fennell made it clear that he did not approve of the committee’s charge: “Please consider me for the W.E.B. Du Bois Legacy Committee. I feel at least one member should be a veteran who sees the wrong in this idea. Thank you for your consideration.”

“I just feel that the decision on whether or not do this has been made unanimously,” Abrahams said of the Aug. 27 meeting when the selectmen voted without dissent to form the panel. “We wouldn’t appoint a library trustee who didn’t believe in libraries. So why have someone on the committee to say, ‘Let’s not do this?'”

Bailly said it would be useful to hear that point of view on the committee, but Selectman Kate Burke said the meetings are public and that anyone may attend and comment of the committee’s work.

“I’m very excited we had this many people apply,” added selectboard Chairman Steve Bannon. “As much as I respect Patrick, I would never put anyone on a committee who was against the charge of the committee, but I hope he shows up at the meetings and voices his opinion, because I respect that.”

Fennell was one of several veterans who showed up at the Mason Library in June to protest the town library trustees’ earlier decision to endorse the concept of a statue of the controversial Du Bois on the front lawn of the library.

Conservatives and veterans have long complained that a frustrated Du Bois, then 90 and about to move to Africa, joined the Communist Party and earlier had given a eulogy on behalf of Soviet dictator and notorious mass killer Joseph Stalin.

Scholars have argued that Du Bois’ actions need to be seen in full context. Justin F. Jackson, an assistant professor of history at Bard College at Simon’s Rock in Great Barrington and now a member of the Du Bois Legacy Committee, has lectured on Du Bois. Jackson has also written a three-part series on Du Bois for the The Edge. Click here to read the series.

Abrahams said the legacy committee has no budget yet, but he expects it will submit a budget request after its first meeting, the date of which has yet to be set.

The members of the W.E.B. Du Bois Legacy Committee will be:

* = not a Great Barrington resident

According to the selectmen, the committee’s charge will be to “oversee several town-sponsored events and programs honoring Du Bois,” including: the Du Bois Day Celebration; the annual Du Bois Festival (from Martin Luther King Day through Feb. 23); banner installations; classes; seminars; guest speakers; collaboration with UMass Amherst and local educational institutions and arts, historical and community organizations; and overseeing and maintaining a rotating display of Du Bois artifacts at the Mason Library.

In other business, in response to questions from members of the news media, Bannon and Abrahams acknowledged that they have been talking to executive search firms interested in helping the town find a replacement for town manager Jennifer Tabakin, who announced in May that she would not seek to renew her contract when it expires at the end of June 2019.

Bannon declined to say which firms had been interviewed, but said he wanted to have representatives from those firms present for the board’s next meeting Tuesday, Oct. 9.

“Our goal is to have them here that night,” Bannon said, adding that a timeline for replacing Tabakin would be announced after a firm is formally hired.

Tabakin, who was absent from Monday’s meeting, submitted her letter of resignation on May 10. Click here to read it.

The last time the town used a consultant to hire a town manager was in September 2012, when the selectmen refused to renew the contract of the irascible Kevin O’Donnell because of poor performance reviews. In a now memorable moment, O’Donnell had strong words in his last meeting in April 2013.

“Old soldiers never die; they just fade away,” O’Donnell said. “When I go to heaven, to St. Peter, I will say: ‘Another city/town manager reporting, sir. I’ve served my time in hell.'”

But the selectmen had already hired a search firm, the Collins Center for Public Management, to seek a new town manager in cooperation with a town search committee that included Berkshire Hills Regional School District Superintendent Peter Dillon and Michael Wise, who is now the town moderator and chairman of the Democratic Town Committee.

Tabakin had an unorthodox resume for a municipal manager. Before coming to Great Barrington, she was a special projects manager for the administration of New York City Mayor Michael Bloomberg.

Some officials, including then-selectboard Chairman Sean Stanton, had cautioned against hiring Tabakin, arguing that it might amount to a “pendulum swing” away from O’Donnell’s cantankerous style. Bannon supported Tabakin’s appointment but acknowledged it took a “leap of faith.”

In yet more business, the board approved a special permit for Tractor Supply to open a store in what remains of the old Kmart space in Barrington Plaza. Click here and scroll to page 22 to see all the supporting documents. And click here to read an Edge story from earlier this month on the special permit application.