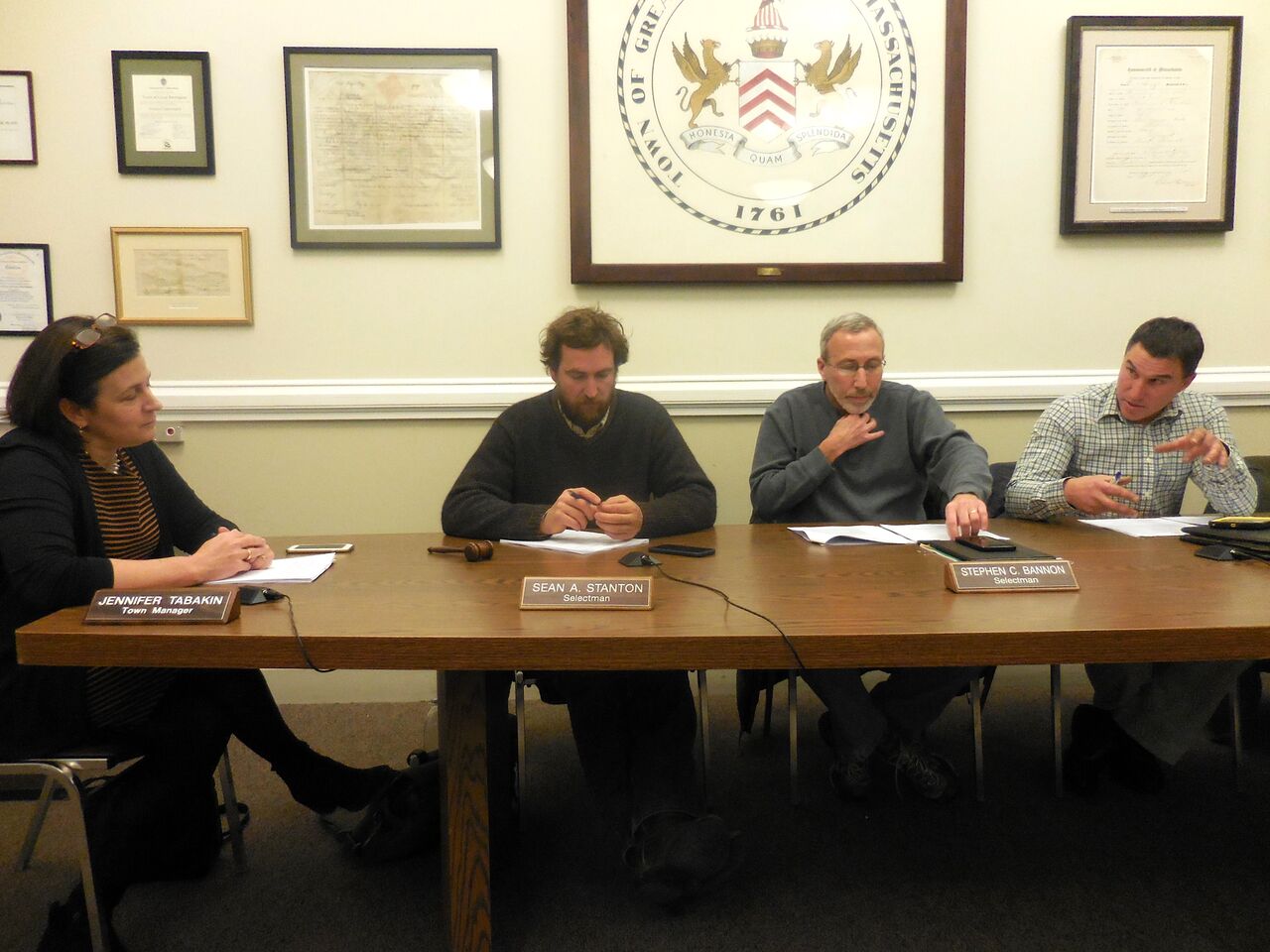 Great Barrington — If building inspector and code enforcement officer Edwin May goes to court again to testify in the case of Gary J. O’Brien, whose trucking company has been told to halt its illegal practices on Roger Road, he will not have to go to court alone, as he did once before.

Over the objections of Town Manager Jennifer Tabakin, the Great Barrington Selectboard Monday (Dec. 18) discussed the legal ramifications of the O’Brien controversy in open session and later voted unanimously to require May to be represented by an attorney if his presence is required in a hearing before the Great Barrington Zoning Board of Appeals or in court.

Last week, several residents who live near O’Brien’s trucking operation went to the selectmen’s meeting to complain about a decades-old problem: a heavy-equipment business whose vehicles roar up and down the residentially-zoned Blue Hill and Roger roads at all hours of the day and whose owner seemed to be ignoring a recent cease-and-desist order issued by May. At that time, the board had few answers, so Tabakin was directed to research the matter and return with some answers for the sometimes-angry residents.

On Monday, Tabakin outlined the procedure for pursuing someone whom the town believes is violating its zoning bylaws. O’Brien was served with a cease-and-desist order on Dec. 1. He has 30 days from receipt to either comply or appeal the order to the ZBA, which would then schedule a hearing and vote on the appeal.

This process could drag into February, given the amount of time required to advertise any hearing. There has been no word from O’Brien as to whether he plans to appeal, though Tabakin said she has heard from O’Brien’s attorney, Edward “Buddy” McCormick, who has finally acknowledged receipt of the order.

Blue Hill Road resident Paul Jones complained loudly to the board that, at a Berkshire Superior Court hearing in February 2013 concerning an earlier cease-and-desist order issued to O’Brien, May appeared without a lawyer while O’Brien had a “high-powered attorney.”

That decision overturned both a cease-and-desist order from the previous year and a subsequent ZBA ruling. It also resulted in the loss of $80,000 in fines O’Brien would have paid to the town, Jones said.

“We sent a building inspector to defend us in Superior Court,” Jones said. “That’s negligence. That’s what we’re here about.”

The comment seemed to catch members of the board by surprise, prompting Chairman Sean Stanton to ask Tabakin, “In the future, he’s not going to court by himself on this issue?”

May’s court appearance without an attorney occurred several months before Tabakin came to Town Hall, during the reign of former town manager Kevin O’Donnell, whose contract was not renewed after poor performance evaluations.

“Our history with this board has been that Ed May has gotten what he has needed when he needed it,” said Selectman Steve Bannon.

Still, Tabakin demurred: “I really don’t think that’s … something to talk about at this point. I don’t think it’s appropriate.”

“Well, I do,” Bannon interrupted her. “You and I disagree.”

“If this goes to Superior Court after the process is done, our building inspector will be represented by town counsel. Is that correct?” asked Selectman Dan Bailly.

“I’m not going to answer a hypothetical question because those are really not helpful,” Tabakin replied. “If you’d like to give directions on that, I certainly will follow.”

Bannon then made a motion that, if May attends a ZBA appeal hearing or goes to court in the O’Brien matter, the town will provide an attorney to represent him. It passed unanimously.

Fairview Terrace resident Roger Belanger told the board, “You seem to be just kicking the can down the road.”

“No, we’re not,” Stanton replied. “The fact of the matter is there’s a process and this is where we are.”

“We will have a much better picture after the 30 days,” added Bannon. “We are in the middle of the process. It is worth looking at the original cease-and-desist order and why it wasn’t enforced.”

May’s most recent order, dated Nov. 22, can seen by clicking here. It cites “multiple complaints” over the past four months about trucks “rumbling up Blue Hill Road, dumping materials and heavy equipment at early morning hours.” The order demands that O’Brien cease the illegal activity immediately.

O’Brien’s Great Barrington operations, while located in a residential zone, predate the town’s adoption of zoning regulations in the 1930s, so they are considered pre-existing nonconforming uses.

May said O’Brien’s actions exceed the sort permitted on a property whose use is nonconforming. Furthermore, O’Brien’s operations are a violation of the 1996 Agreement for Judgement in the case of the Town of Great Barrington v. Leamon Roger, the previous property owner and which May had also cited in previous orders. That judgement ordered O’Brien to halt all transfer-station activities.

May’s site visit of Aug. 22 revealed waste dumping and the expansion of a parking lot without a site-plan review required by the town’s zoning bylaws. May ordered O’Brien to file for a site-plan review with the Great Barrington Planning Board.

O’Brien has been issued multiple cease-and-desist orders in the last six years. On June 23, 2011, May issued O’Brien the order to immediately cease using the property as a landscaper’s yard because he was only permitted to use it as a tree farm. If he wanted to use it as a landscaper’s yard, he would have to apply for a special permit from the zoning board of appeals. The property had been found to be in violation three times in seven months.

When asked how seriously the town was taking the current problem, Bannon replied, “This board is not going to forget about this now.”